Chris Chibnall’s run of Doctor Who has had some major obstacles about which he could not do anything, like COVID-19 and like the British media suddenly getting outraged about John Barrowman’s decade-old inappropriate behavior on set, but it’s hard to see the year-long gap between “Resolution” and “Spyfall” as anything other than a totally unforced error. Despite the outsize grumblings of the he-man woman hater’s club, there was a palpable enthusiasm about Jodie Whittaker’s Doctor in January 2019, and the BBC did nothing to capitalize on this. They should have already been in production when series eleven was being shown, to get new episodes on the air as soon as possible, but the BBC has never understood how to strike when an iron is hot.

That said, “Spyfall” is visually one of the most striking Who series openers. It’s a big globetrotting adventure with a pair of huge guest stars in Stephen Fry and Lenny Henry, some interesting new aliens called the Kasaavins who are from another universe entirely, and a plot that seems to have been written after Chibnall watched all the time travel shenanigans of “The Curse of Fatal Death” on an endless loop. We’re now comfortably back – I think! – in our son’s memory hole. He says that he remembers this series very well, as I certainly hope he should; it’s not even been two years. He mainly liked the laser shoes, of course.

But “Spyfall” has some really aggravating misfires among its visual splendor. The second biggest one is that the story takes aim at something serious in the real world: giving up our privacy to search engines and social media. But too much like “Kerblam!” for my taste, this caution doesn’t come with any bite. Lenny Henry’s character is in charge of a search-engine-plus thing called Vor, which operates in the same world as Facebook but we can intuit that Vor is larger and more youth-skewing. The story hints at the dystopian awfulness of this thing, evoking Dave Eggers’ 2013 novel The Circle, but there’s no consequence or follow-up to Henry and the Kasaavins’ plan. The last we see of him is he’s walking out a door asking for an extraction team. We’ve seen Who refuse to follow up on history-changing tech or politics several times since 2005, but this still feels incomplete, and toothless. 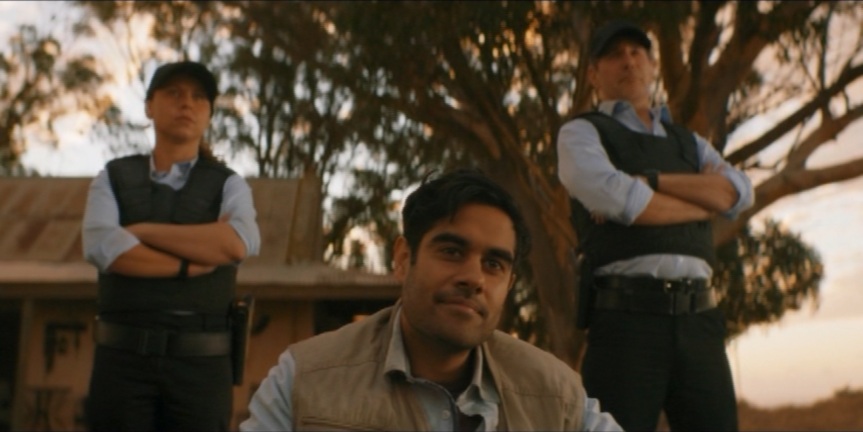 That said, I think that the biggest misfire in “Spyfall” is actually Sacha Dhawan’s character. To Dhawan’s considerable credit, I appreciate how frighteningly angry his Master is, marking him as very, very different from the previous versions. As I’ve said previously, I sincerely don’t believe that there should be a Master after Missy. But it’s not just “it’s the Master again” that’s the problem. It’s that O is a million times more interesting than the Master. The character that Dhawan creates in part one of this story is something that Who has never actually done well before: a Master disguise who has a life and a world that is engaging and in which we want to believe.

O could have been an absolutely wonderful new recurring villain, someone who uses all of Earth’s technology and resources, including an alleged shelf full of reports about the Doctor’s past, against our hero. When we see how dreary the Master is at the end of this series, it will really drive home how we could have had the incredibly talented Dhawan do something so much more fascinating and fun. Ah well. It’s not like this program’s not completely full of frustrating missed opportunities.