The Ghost Busters 1.15 – The Abominable Snowman 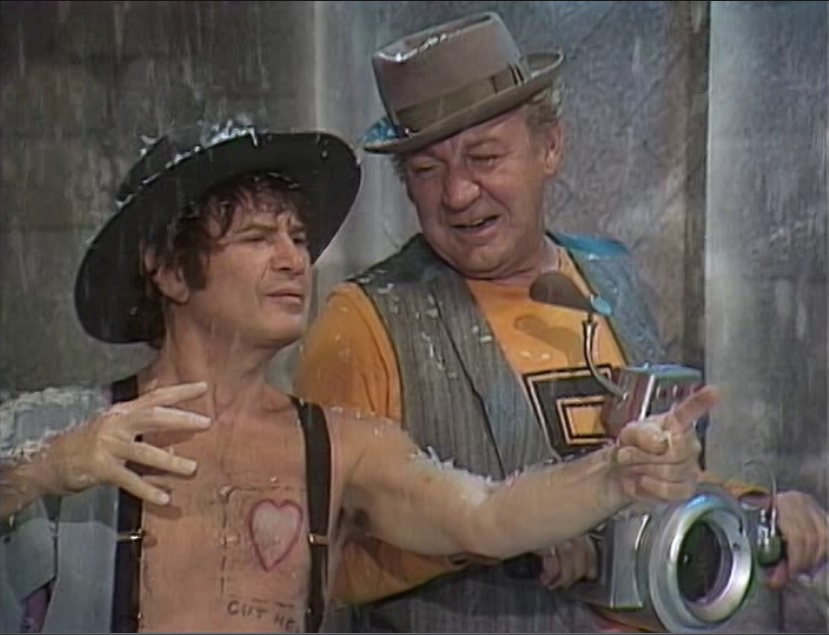 The main guest star in the last Ghost Busters episode was a guy named Ronnie Graham, and what an interesting career he had. He was an occasional actor, probably best known as Rev. Bemis on Chico and the Man, but was also a writer, with credits as far afield as M*A*S*H on one extreme and The Paul Lynde Halloween Special and The Brady Bunch Variety Hour on the other. Here, he plays the Ghost Busters’ final nemesis, Dr. Centigrade, who wants to implant a warm heart into the abominable snowman’s body.

Well, I’m kind of sad that we finished up the show, on the one hand because Daniel really, really enjoyed it, but also because the special features on the DVD reminded me that this was arguably the only truly fun live-action Saturday morning show that Filmation produced. They did several other live-action programs in the 1970s, several of which we intend to look at down the line, and one of the features on the disk is a “coming attractions” of all the other shows that BCI / Entertainment Rights / Ink & Paint released from the Filmation library. The cartoons were all awful, and the dramas were dour and earnest. But The Ghost Busters, despite its zero budget and forced repetition of gags around the same three sets and one location, was charming, silly, ridiculous, and often unpredictable. It was a fun show, and I’m glad that they made it.

One last note about Filmation, a gag this time involves Tracy’s clock radio being set to play “Sugar Sugar” by the Archies. Since Filmation had made the Archie TV cartoon, I figure that they were cut a deal on the licensing!

The Ghost Busters 1.14 – Merlin, the Magician 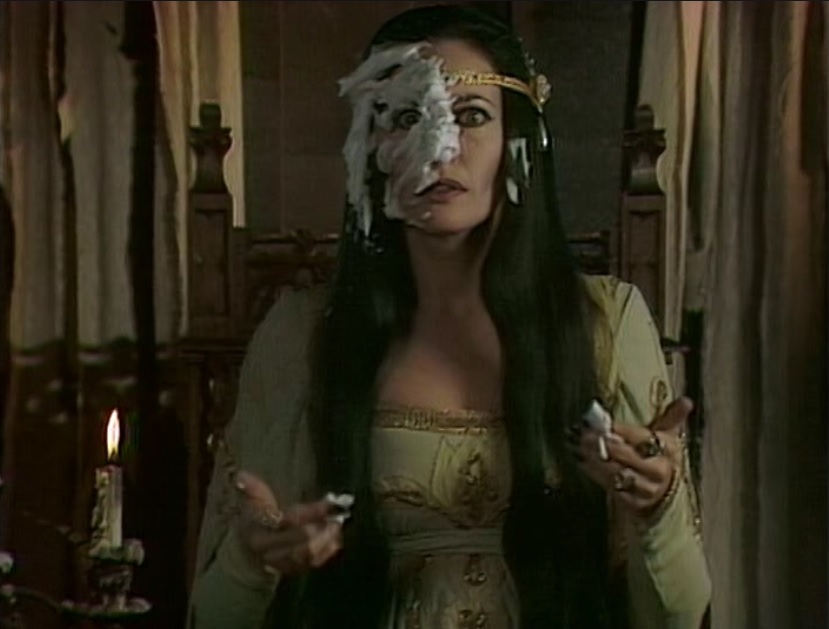 There’s an incredibly odd little casting choice here. Huntz Hall reprises his role as Gronk from episode eight, but neither he nor the Ghost Busters acknowledge that they’ve met before. You’d think that would be worth a mention, “you again?” or something. I suppose that the director and the stars enjoyed working with him, and since they needed a similar “low intelligence sidekick” for Merlin, they asked him back without altering this episode’s script beyond noting the character’s name.

Daniel giggled all through the opening scene, in which Spencer informs Tracy that the prize of the gorilla’s rock collection is actually a dinosaur egg. They decide it needs to be kept somewhere very, very safe, and if you don’t predict that Kong will end up sitting on the egg, then you must be my son’s age.

Guest stars this week are Carl Ballantine, who had played Lester on McHale’s Navy for several years, as Merlin, and Ina Balin, who had dozens and dozens of one-off roles (including five different ones on Quincy, M.E.) but never a starring part, as Morgan Le Fay. Ballantine plays Merlin as Sid Caesar doing a frustrated stage magician, and Balin is note-perfect as the icy and humorless villain. In a complete reversal of the usual formula, Merlin and Gronk want to be dematerialized and sent back to “the beyond,” but the incompetent Merlin zaps the ghost dematerializer into Morgan’s hands.

The climax is also really funny. Morgan casts a spell that makes any man who makes eye contact with her freeze, not realizing that Tracy is a gorilla. He keeps a whipped cream pie in his magic bag, saving the day. Earlier, we saw that Tracy had bagpipes, tartans, and a tam o’shanter in his bag, so the pie comes as no surprise.

The Ghost Busters 1.13 – The Vikings Have Landed 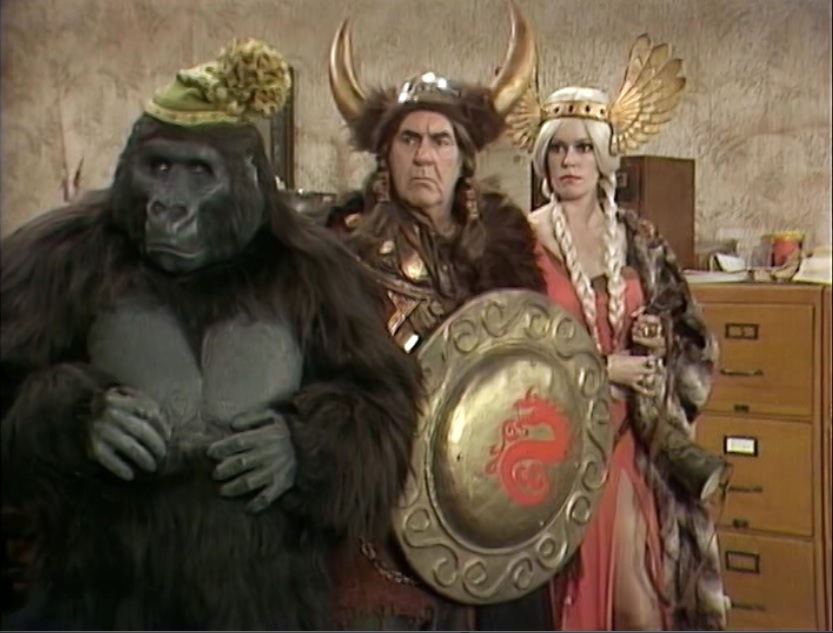 I found myself liking the show trope of the ghosts talking before they actually materialize and show themselves with this episode, because Erik the Red is played by the unmistakable Jim Backus, who was Thurston Howell III on Gilligan’s Island and the immortal voice of Mister Magoo. So when he started yelling, I said “I know who thaaaat is…” Backus did quite a lot of kid-friendly work in the 1970s in addition to prime-time roles. His time on Gilligan made him high-demand from just about every producer in town. You never asked “What’s Jim Backus doing in a cheap show like this,” because he was in every show, regardless of budget or audience.

Daniel adored this episode, which has series-best hallway gags (all five principals end up colliding in the middle) and filing cabinet gags. The trick to the filing cabinet this time is that it has to be shoved from behind to open, and it’s bolted to an exterior wall. Fortunately, Tracy’s grandfather was known for climbing the Empire State Building. This leads to a completely unexpected gag when Tracy makes a second trip outside the building to walk around. I wondered what he was up to, and had a very good laugh when the gag pays off.

Joining Backus in this trip back from the afterlife is an actress named Lisa Todd as Brunhilda. Of course that’s her name; there aren’t any other Viking names for women on television. She doesn’t seem to have had a very long career, but she was a “Hee Haw Honey” for most of four seasons in the seventies.

The Ghost Busters 1.12 – Only Ghosts Have Wings 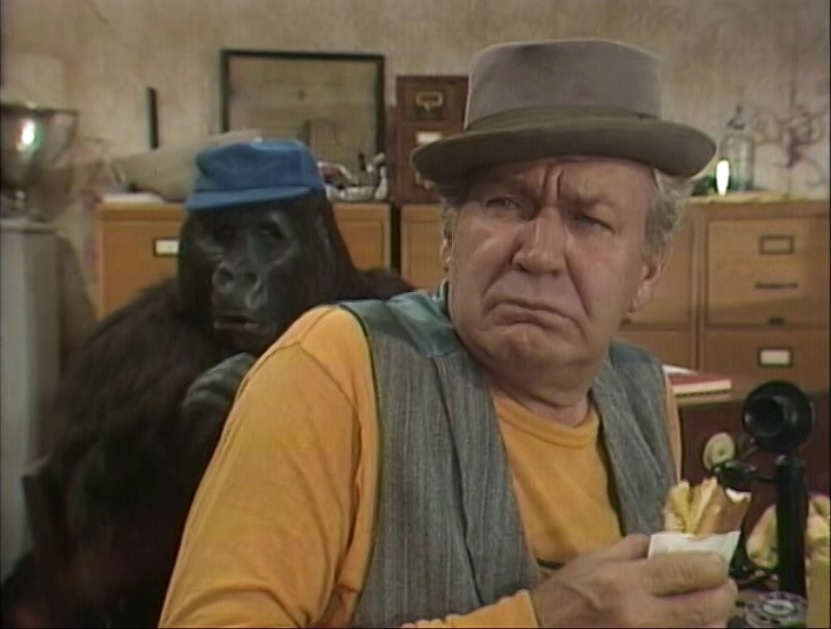 Even Daniel couldn’t embrace this episode. Even with the low expectations of this show, with so little changing from week to week, it’s a pretty dry one. I enjoyed Larry Storch’s impression of James Mason, into which he keeps lapsing, and Daniel seemed to most enjoy this week’s variation on the filing cabinet gag. This time, the trick to opening the door is unscrewing the cap on a half-gallon jug of milk!

The special guests this week are Robert Easton, who, in a really curious career curve, had been the voice of Phones in Gerry Anderson’s Stingray a decade earlier, but he just steps back and lets Howard Morris, playing the Red Baron, steal the show. Morris was one of Filmation’s regular voice actors – he and Larry Storch played the three main roles in The Groovie Goolies – and something tells me this is not the last time that Daniel and I will watch him employ a silly German accent… 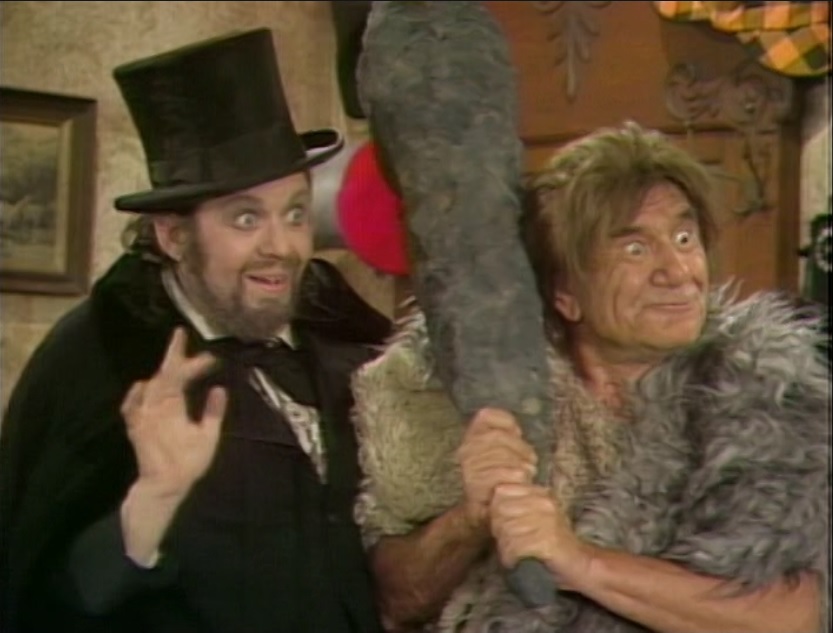 Daniel got the biggest laugh in weeks when Dr. Jekyll, invisible, steals Spencer’s hat. The crew were barely trying. The string is visible from space, in every shot. It didn’t matter. If you’re four, the sight of that hat dancing around the set is a work of pure comedy genius.

If you’re older than four, the main draw of Ghost Busters, of course, is the chemistry between Forrest Tucker and Larry Storch, who are just so incredibly entertaining and silly together. But the secondary draw must be the guest stars, and the incredibly clever and unexpected casting choices. Joe E. Ross, who plays Hyde as a caveman, is a fairly inspired choice, since he had actually played a caveman in Sherwood Schwartz’s poorly-regarded sitcom flop It’s About Time eight years previously… although it’s not all that likely that any of The Ghost Busters‘ young audience would be expected to know that. I wondered how many times in the episode Ross would make his “Oooh! Oooh!” noise. Three.

But the really stunning surprise is Severn Darden playing Dr. Jekyll. He really did have an incredibly varied and full career, with all sorts of roles in comedies and dramas, but he is probably best remembered as one of the original Second City players; in fact he appears to have been only one of three to bridge the gap between the mid-1950s Compass Players, which featured Stiller and Meara, and Mike Nichols and Elaine May, and the first Second City group in 1959. He and Ross seem to have a lot of fun clashing their personalities – Jekyll erudite and snobby, Hyde thoughtless and stupid – and while the material is certainly no challenge to either actor, it looks as though they had fun.

The Ghost Busters 1.10 – The Vampire’s Apprentice 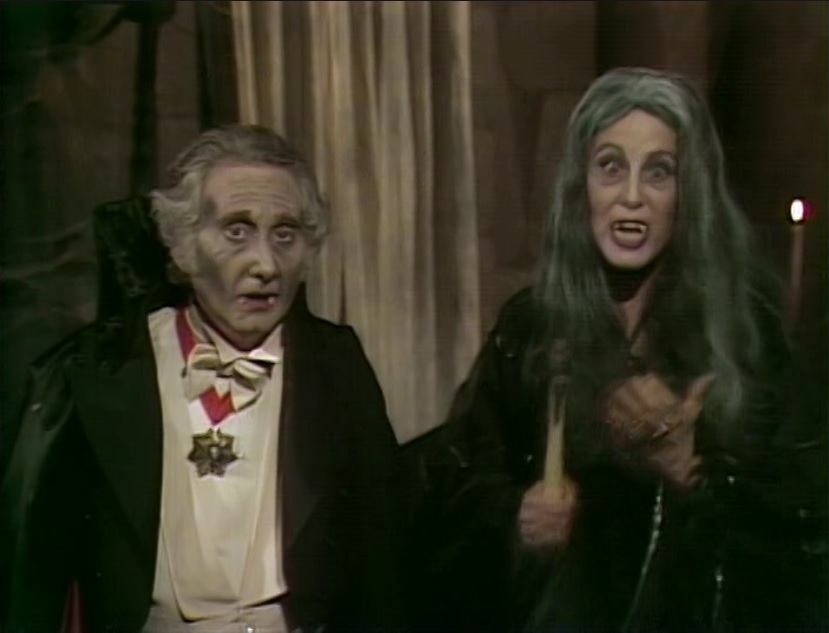 Daniel just loved this episode. Tie a rubber bat to a string and dance it around a graveyard and you’ve instantly won the hearts and minds of little boys. All the usual gags – the self-destructing tape, the file cabinet – had him giggling and rolling around on the sofa. The Ghost Busters may do the same thing every episode, but four year-olds have no complaint with it.

A vampire episode was perhaps inevitable, but they had a lot of fun with it. Count and Countess Dracula are henpecked and grouchy, long out of love with each other. Dracula is feeble and completely pathetic, needing “lighty-light” stories; his wife wonders whether any of her old boyfriends from the old country might still be available.

Dena Dietrich is best remembered for spending the 1970s playing Mother Nature in a long series of commercials for Chiffon margarine (here’s one), but Billy Holms only had about a dozen very small credits to his name. They’re really amusing together. It’s a shame that the Draculas didn’t make a comeback in a later episode!

The Ghost Busters 1.9 – They Went Thataway 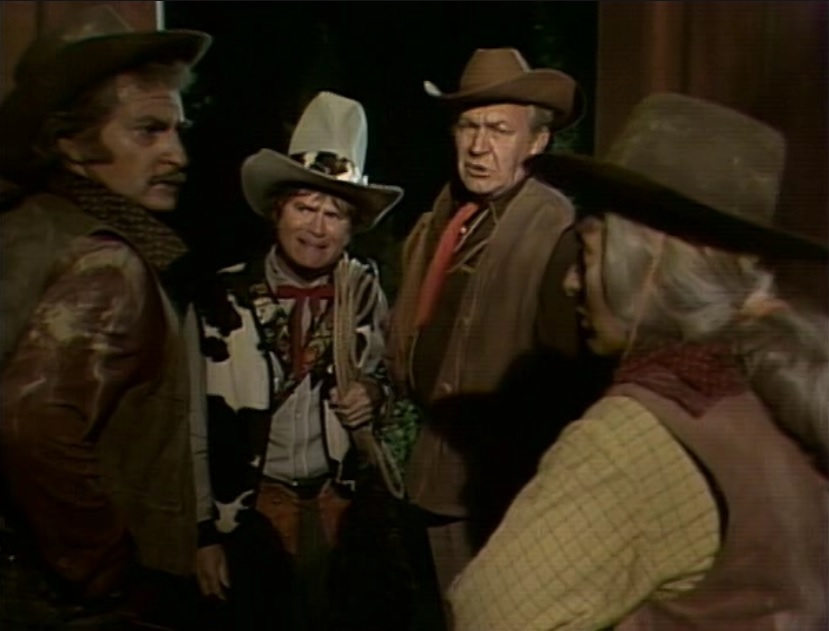 Forrest Tucker has the most amazing line of dialogue in this episode. See, this week, Billy the Kid and Belle Starr come back from the grave, because they’re haungry for some vittles and want a steak. They’re looking for some good cowpokes to join their crew of cattle rustlers, and, to prove his mettle, Kong explains what a good rustler he is. This requires Tucker, pro that he was, to spit out this unbelievable paragraph of gobbledygook about tumbleweeds, sand, and rattlesnakes. It’s the most remarkable run-on sentence I’ve ever heard. When he finally finishes, Billy the Kid replies “That’s easy for you to say!”

Billy the Kid is played by Marty Ingels, who passed away earlier this month. Ingels was one of those peculiar actors who had been around for so long and mentioned so often that his list of credits seems far, far shorter than expected. He did lots of voice-over work for Hanna-Barbera, but is probably best-remembered for a 1962 sitcom called I’m Dickens, He’s Fenster. That was one of those sitcoms that you’re surprised to learn only ran for one season, because you always find people talking about it. (See also He & She and Bridget Loves Bernie.)

Anyway, while Ingels didn’t work constantly, he did have a career that spanned most of six decades. Belle Starr is played by Forrest Tucker’s daughter Brooke, and she left the business after about five years.

Daniel had a ball with this episode. There’s a really funny bit where Tracy and Spencer are blissfully unaware that their television program is spraying water at them and belching smoke everywhere, and he’ll probably be talking abut Old Boot Soup for the next week, even though he insists that he doesn’t want to try a bowl of it.

The Ghost Busters 1.8 – Which Witch is Which? 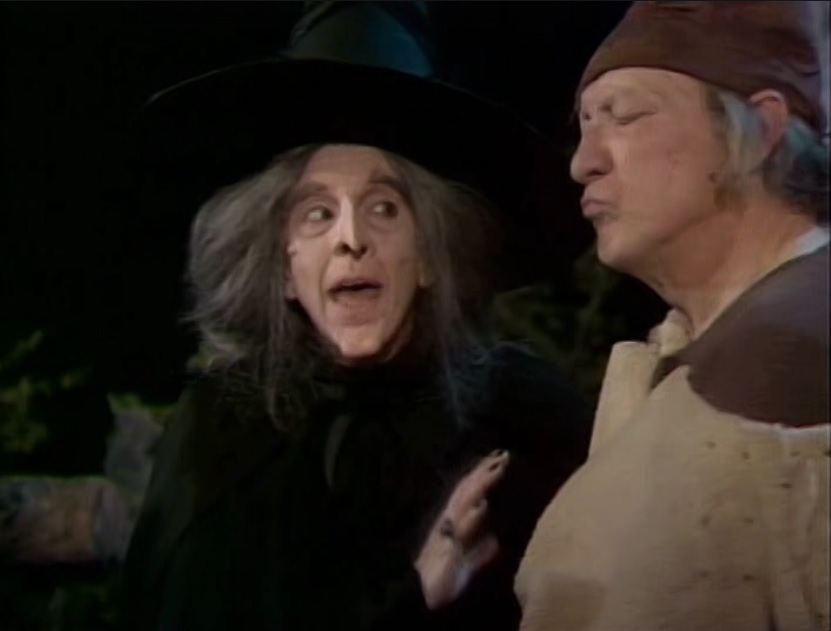 Daniel didn’t quite get upset with this episode, but he did fret a little bit. Ann Morgan Guilbert, playing the Witch of Salem, puts Tracy in a trance and has him march around doing her bidding. He pouted and curled up next to me, worried about the big ape. Then, because her dimwit assistant, with the terrific name of Gronk, has messed up the concoction in her cauldron, her next spell accidentally swaps Tracy’s mind with Spencer’s. This leads to the odd sight of Bob Burns’ ape costume’s mouth opening and closing for human speech to be dubbed over the movements. I didn’t expect that, but it relieved Daniel tremendously to see some more dopey slapstick.

Overall, this wasn’t quite as entertaining as the previous episodes, although there is a great bit where Spencer lobs an invisible book – The Life of Claude Rains – over his shoulder and breaks a vase. Huntz Hall is endearingly stupid as Gronk; it’s tough to decide whether Gronk or Spencer is the bigger dimwit.