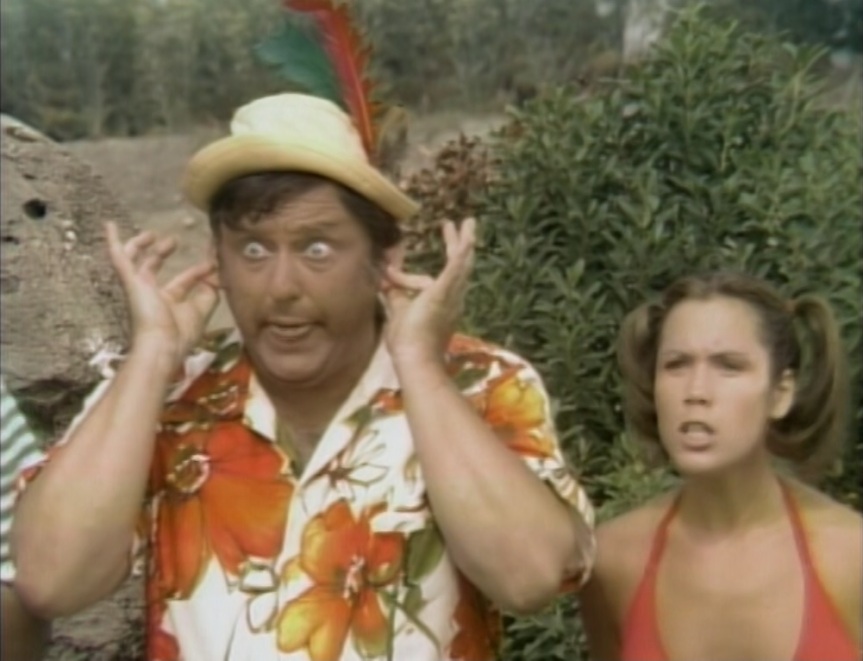 When The Krofft Supershow came back for its second season in 1977, there were a few changes. Two-thirds of the shows were different, and the hosts, Kaptain Kool and the Kongs, had a major makeover.

I always got the impression that the Kongs were many people’s least favorite part of the program – even as kids, few of my friends were at all interested – but I thought they were so much fun. I’d rank them second – a distant second, mind – behind Dr. Teeth and the Electric Mayhem in that odd category of best fictional groups for children. They put out an album on Epic Records and everything. The original lineup was a five-piece: the Kaptain (Michael Lembeck), Superchick (Debra Clinger), Nashville (Louise DuArt), Turkey (Mickey McMeel), and Flatbush (Bert Sommer). They dressed in flashy, glam satin. For season two, Flatbush was dropped and they dressed in more subdued denim outfits – still seventies garish, but disco seventies, not Roy Wood glitter rock seventies. Neither the LP nor the single, “And I Never Dreamed,” charted, but the group appeared on all the Kroffts’ evening variety shows, like Donny & Marie.

As for the shows they hosted, Magic Mongo replaced Dr. Shrinker with another batch of sixteen 15-minute episodes. Bigfoot & Wildboy replaced Electra Woman, with sixteen cliffhanging episodes that comprised eight stories. And Wonderbug was back, with six new installments and ten repeats from the first year. This season’s lineup was commemorated by Gold Key/Western in a comic book that ran for six issues over nine months, along with a second Kaptain Kool LP on Peter Pan, one of those audio adventure records that I adored as a kid in the days before home video.

Magic Mongo is absolutely lovable and ridiculous. It’s about an incompetent genie played by Lennie Weinrib. Mongo’s good guy master is Donald, who is played by Paul Hinckley, and his only other credit listed at IMDB is the last episode of Isis‘s first season.

Donald hangs out at the beach all the time with his two always-platonic girl buddies, sharp-tongued Lorraine, who is played by Helaine Lembeck, and Kristy, by Robin Dearden. Lembeck would later play Judy in Welcome Back, Kotter. Dearden, who wears a bikini in every single scene of this series, has had small roles in many shows like Magnum PI and TJ Hooker, along with one of the second season Bigfoot & Wildboy episodes. Constantly antagonizing the foursome: two leather-clad ne’er-do-wells, Ace and Duncey. Ace is played by Bart Braverman, who has been in a million things.

Daniel absolutely loved this episode, giggling through all the special effects and dumb jokes. We have to emphasize “dumb,” because, like most of the TV cartoons and comic books of the period, we have to believe that somehow the villains have access to disguises and a printing press to carry out their bizarrely complicated schemes. (I’m reminded of a very dumb comic book called Dial H for Hero, in which baddies would use atomic submarines and dozens of henchmen to rob the Littleville minor league ballpark of its gate receipts.)

Marie started having trouble suspending disbelief as soon as Ace and Duncey turned up in leather jackets on the beach, so the rest of this was twelve minutes of wincing. For any adult who didn’t love this as a kid, it’s probably a trial. But I always adored the stupid jokes, and Mongo not quite understanding what Donald wants him to do. This time out, he turns Lorraine into a Saint Bernard to track down the bad guys, and doesn’t understand that Donald means “money” when he asks for “bread.” I’m sure a binge of all sixteen episodes would be about fourteen too many, but one’s just fine.

So, here’s some trivia you did not know: Magic Mongo and Wonderbug are set in the same universe. Soon after they taped these sixteen episodes, Sid and Marty Krofft pitched ABC a prime-time sitcom – for families, not just children – in which Braverman’s character, Ace, runs a restaurant. Ace’s Diner wasn’t picked up, but they did tape a pilot, in which David Levy and John-Anthony Bailey’s Wonderbug characters, Barry and CC, also appear. The Kroffts also taped a pilot for another sitcom called Looking Good, starring Sheryl Lee Ralph. ABC passed on both, but ran the two pilots together with some more Kaptain Kool and the Kongs interstitials and special guests Sha Na Na as a summer prime-time special called The Krofft Comedy Hour in July 1978.