Well, that was just about the most 1970s thing we’ve ever seen. It was terrific, don’t get me wrong, but while the grownups in the audience were certainly anticipating the Juganet to turn out to be Stonehenge, neither of us were expecting one of the kids to be transported into the future for a confrontation with the cult from Beneath the Planet of the Apes.

Okay, fair’s fair, I knew they’d end up at Stonehenge because I’d read a little about this, but so did Marie, who’d never heard of this serial before we started watching it. The program just hits the 1970s paranormal bingo so precisely that not only is Stonehenge inevitable, but if the writers, Bob Baker and Dave Martin, had sold this to an American network for a movie-of-the-week remake, they’d have filmed it in Florida and made the Juganet the Bermuda Triangle.

Didn’t see the trip to the future coming, though. In fairness, episodes one through six were just so darn good that, knowing Baker and Martin’s Doctor Who track record, I’m not at all surprised they couldn’t make the end work. Bernard Archard, an actor we will see again here in just a couple of weeks, briefly appears in the future sequences, but it’s honestly a letdown.

It’s best to focus on just how good the rest of the serial is. Part six has the kids trapped in an invisible house with unbreakable windows, menaced by Goodchild’s henchman, a really creepy man who, in one of the freakiest moments ever, is shown to be a raven or a crow turned into a human. Our son was petrified and behind the sofa for most of part six. If I were his age, when the crow-man started cawwing, I’d have been right back there with him.

Overall, though, this wasn’t a big success for our son. It was too scary for him, and the ending was just too strange. It’s my fault, though. It’s a children’s serial, but six-nearly-seven is really a couple of years too young. We may come back to the HTV serials when he’s a little older. Some of the others they made (Clifton House Mystery, King of the Castle, Raven, etc.) just sound terrific, and if any of them are half as good as this or Children of the Stones, they’ll be worth the investment. I might possibly pick up New Zealand’s Under the Mountain as well. We’ll see what 2020 looks like.

We resumed watching Sky, planning to run through the final three parts tonight and tomorrow. Truthfully, our son is not enjoying this story anywhere nearly as much as I am. I think this is just fantastic, inventive and full of ideas. He’s gone from finding it “creepy” to “scary” to “crazy.”

One problem is that while we’re meant to sympathize with Sky and his teenager friends, they sure aren’t making it easy on the audience. Sky is not really able to answer questions, and he’s haughty and superior. The goal is to get him to the Juganet, whatever that is, so he can leave. Absolutely nobody will be sorry to see him go. Because Goodchild is willing to destroy anything that protects Sky, he’s putting lots of people in danger while everyone puzzles out what the Juganet is.

In part five, they finally get enough clues to reason out that the Juganet may have something to do with sacred sites, and there is an ancient burial mound nearby. Sky meets up with a pair of dropouts who live in an old graffiti-covered caravan with their baby. The girl doesn’t seem like she’s having a good life with her fellow dressing in rags and beads and reading Thomas Malory. The hippie thinks that Sky might be an obscure figure called Evalake, who is apparently mentioned briefly in Le Morte d’Arthur. (I confess I know extremely little about Arthurian lore, and this story seems to just glance off Malory before going its own way, but “Evalake” may be a mistranslation or a corruption of the name “Avallach,” if you’re curious what this serial’s writers, Bob Baker and Dave Martin, may have been reading among their influences.)

Anyway, Goodchild makes another attack, and this one’s a beauty. The young couple’s trailer is surrounded and enveloped by vines which smash the windows and try to kill everyone inside. While modern eyes may need to suspend a little disbelief in what was clearly a massive drain on HTV’s modest resources, it really is a remarkably frightening moment. You know that Sky’s going to get out, but these innocent bystanders might not.

This is great, great stuff, but, in deference to our son, we’ll finish it up in one go tomorrow instead of stretching it out further. Well, he came around to “Revenge of the Cybermen” in a big and unexpected way after hating the first three parts. Maybe Baker and Martin will pull out a win in the end? 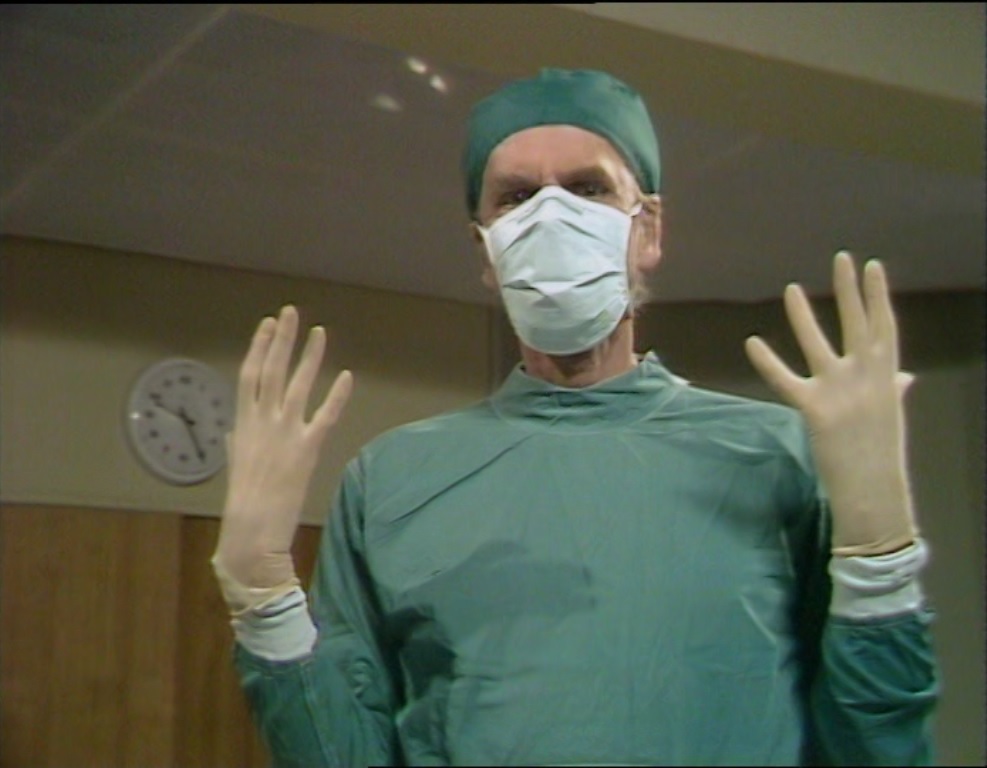 Man alive, this thing took a sharp turn into completely creepy tonight. Sky spends the entire episode in the intensive care unit of the local hospital after Goodchild’s last attack, but Mother Earth’s agent isn’t done with the visitor from space yet. No, because Mother Earth’s manifestation is out to give every young viewer watching this nightmares forever, the dude uses his mental powers to persuade everyone in the hospital to get an operating theater ready. Can you imagine being a kid with a fear of hospitals and watching this horror show? Mother Earth is going to literally carve out this “infection” from space by operating on Sky’s brain!

I’m enjoying the daylights out of this, and I think he’s loving being scared, but the little dude’s earned some R & R and a couple of days’ break from the intensity. 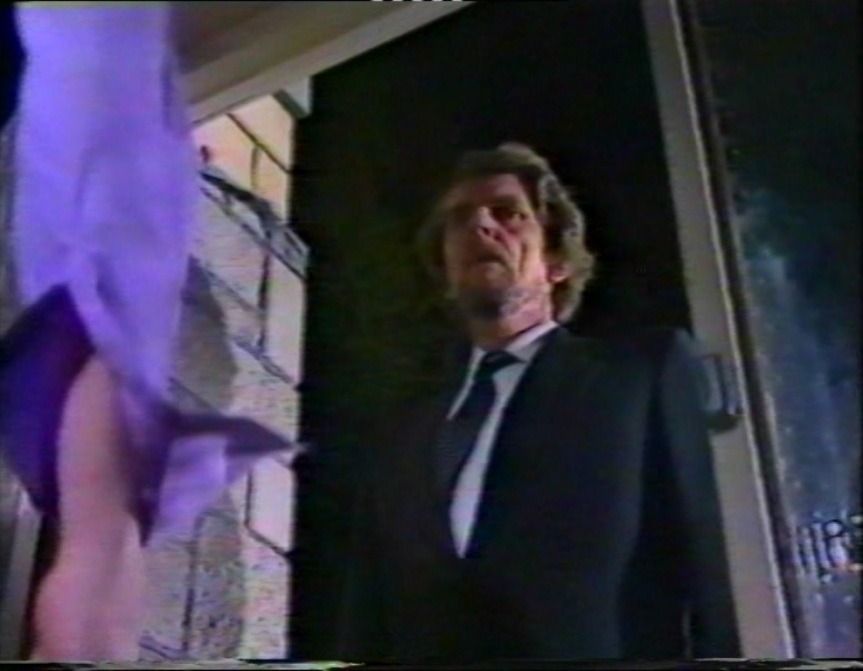 This didn’t start off promising. I knew episode three wasn’t going to live up to this morning and afternoon; we watched Iron Man 2 here and then went to see Black Panther, which was very good, at the Regal. Our son’s been pretty wild today with all the spectacle and excitement, and tonight we settled in for a forty-three year old slow burner.

And indeed the opening scene had him completely lost. David Jackson, a familiar face on British television in the seventies who is probably best known as Gan in Blake’s 7, plays a police sergeant getting statements from the kids and their parents, trying to find out which social service or remand home that Sky has left. There’s also the matter of Major Briggs accusing Sky of assaulting him, but there’s not a mark on him. Our son asked to pause it and I needed to completely recap everything. I think the storytelling is clear, but to older viewers. Our son’s unfamiliar with any sort of police procedure and didn’t know what was happening. When Sky puts the whammy on the sergeant – a “these are not the droids you’re looking for” Jedi mind trick a couple of years early – it really had him confused.

Then Goodchild turns up. This is the character played by Robert Eddison, a manifestation of Earth’s resistance to Sky. Everything about him just oozes menace and malice in a way that not even Mickey Rourke or Michael B. Jordan, in their roles as Marvel villains, could manage. The music is an interesting clue. Most of the incidental music, which is by Eric Wetherell, is played on traditional instruments, but Goodchild is accompanied by a harsh synthesizer score. It sounds uncannily like the incidental music that Dudley Simpson had composed for “Terror of the Autons” to accompany the Master’s first arrival on Earth.

Because he’s six, our son squirms a lot. Feet are occasionally in the air. But tonight, he was shooting finger guns at Goodchild, before the character had actually done anything other than glare at Robert Speight’s character. We told him to sit down and he sat still, mouth tight and eyes wide. After the episode finished, I wondered why he was shooting at the TV, worrying that he was fed up with this odd show. No, he just didn’t like that man. “He’s going to hurt Sky.”

“Are you worried about Sky?” I asked. “I’m not worried, I’m scared for him,” he replied.

Last month, as we looked at the fabulous Children of the Stones, I briefly mentioned that there were a few other paranormal children’s serials making the rounds in the 1970s. A few of these turned up in the United States on Nickelodeon’s anthology series The Third Eye. Several which sound like they could have fit right in to that collection, such as Raven and King of the Castle, sound tantalizingly interesting.

Sky also didn’t make it to North America as far as I can tell, and I’m telling you: we missed out. We watched the first two episodes this evening and I enjoyed the heck out of it. I think my wife activated her “oh look, videotape interiors and 16mm film exteriors again” force field, and our son kept it at arm’s length because it’s remarkably creepy and strange. That’s okay. I like it enough for all of us.

Sky is a seven-part serial written by Bob Baker and Dave Martin for the HTV network, and shown in April and May of 1975, right alongside the last couple of Doctor Who stories that we watched. If David Bowie’s lyric about making way for Homo superior had inspired sixty-eleven television programs in that decade, then here’s its colleague. Sky is the Starman waiting in the sky who thinks he’ll blow our minds. He’s played by Marc Harrison and he’s from a different time or different dimension and very much out of place here. He needs to access something called a Juganet, a circular machine which helps travelers “cross over,” and he’s running out of time to find it.

From the instant Sky arrives on Earth, the planet retaliates against him. Sky is in constant danger from howling winds, swaying trees, roots that try to strangle him, and episode two ends with the planet forming a humanoid figure, a sinister-looking adult known as Goodchild played by Robert Eddison, in the forest to prepare a new attack. Sky is assisted by three teenagers, played by Stuart Lock, Cherrald Butterfield, and Robert Speight. Jack Watson, who showed up as the grown-up character in some similar SF/paranormal productions from the time like The Changes and The Georgian House, plays Speight’s father.

I think that so far, we’re off to a terrific start. To hear people talk about it – and it has a fantastic writeup in the essential Scarred for Life that had me ordering this DVD the same week as reading about it – Sky is just an unforgettable production full of freaky, eerie imagery and incidents that will stick with us for a while. I’m anxious to see what will happen in episode three… but we’ll watch something tomorrow morning a little more explosive to keep our son cheering before we creep him out with the next installment.