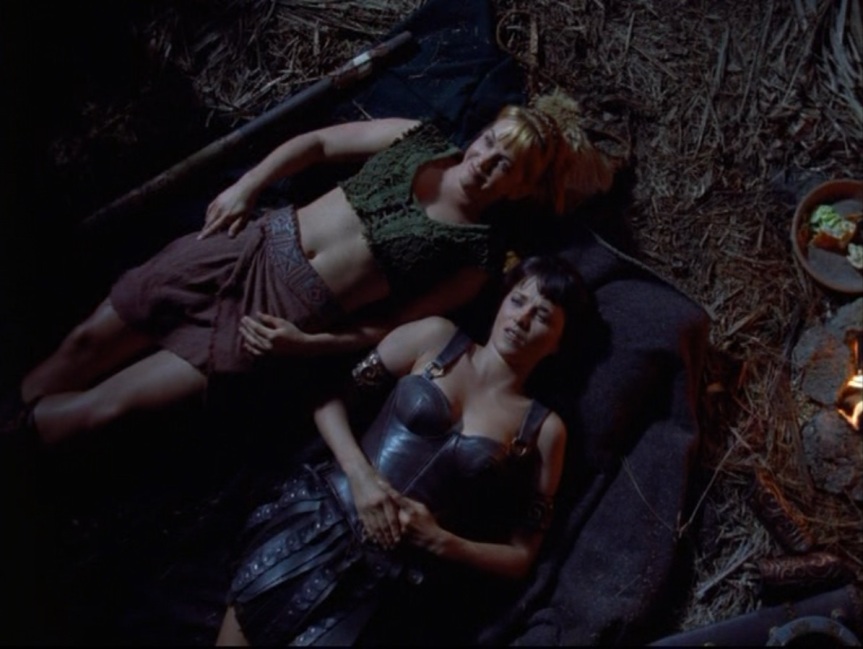 If we run into a better episode of Xena than this, I’ll be amazed. This one is completely delightful. They did it on the cheap, with just five additional speaking parts and a minimum of special effects, and they let Lucy Lawless and Renee O’Connor have a ball. Our heroines wake up on the wrong side of the ground and cannot stop snapping or finding new and novel ways to aggravate the living daylights out of each other. Clearly they love each other and would do anything for each other, but they are in really bad moods. Frying pans and round killing things are misused, to say nothing of poor Gabrielle’s scrolls, and don’t tell me anybody with Xena’s flawless aim is accidentally throwing the fish that she’s catching barehanded where she throws them.

And then they have two problems to solve: one village a couple of hours away is under threat from a warlord’s army, and another village a couple of hours the other way has caught the attention of a really mean giant. And then the fellow who came to get help for Village # 2 falls in love with Xena. He doesn’t stand a snowball’s chance in Tartarus, but it’s the blue eyes and the leather… Gabrielle has seen it all before.

This is absolutely priceless, note perfect in every scene. I really agonized over what picture to use, because the whole shebang is one hilarious slow burn after another. Until the end, the only time Xena and Gabrielle aren’t exasperated over either the situations or the latest rotten trick one’s pulled on the other is when they stop fighting to have a bath, which, much like the infamous revelation of Mrs. Peel’s Hellfire Club costume in “A Touch of Brimstone”, has been documented visually quite enough already. And even the bath ends with the two having a water fight. But the day turns out all right, villages get saved, as well as maybe even that dumb lovestruck clod’s relationship, and so the tension relaxes just enough for Gabrielle to surprise Xena twice. Possibly only once. Xena may have let Gabrielle “surprise” her once, because it’s kind to discreetly allow someone you love to win once in a while. It’s unresolved, but it’s wonderful.