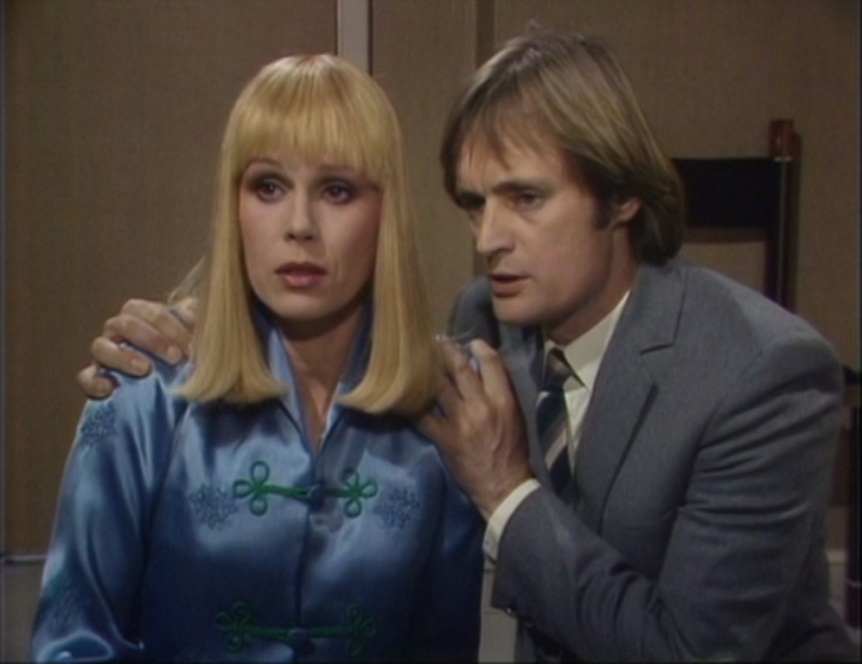 The third Sapphire & Steel story climaxes with an unfortunately poor visual effect, as you sort of get used to from watching this sort of program from the period, but our son is still at the age where these things can be completely terrifying. We lost track of him after he sped behind the sofa. I think he left the room entirely.

The scenes where it’s revealed what the time element is really fascinate me. It’s a great inversion of expectations. You get used to Steel being either brusque or unpleasant, and so even though these travellers from Earth’s future are weird, you end up sympathizing with them a little, because who’d want to be on the receiving end of Steel’s bad temper? But then the story reveals that they’re not just weird, they’re from a completely hideous time, and even our inhuman heroes are shocked into silence by these jerks’ inhumanity.

Without revealing that plot point, this brings me in a roundabout way to one of the things that I found so curious and weird about this show when I first heard of it. The stories don’t have titles. I couldn’t find an episode guide for a while in the eighties; I just knew the show existed, but I didn’t know how much of it there was, or what the stories were called. (Even worse, a friend told me at a con in 1988 that he saw a Sapphire & Steel book in the dealer’s room. I rushed to the table all excited, only to be deflated when it was one of those hardback Christmas annuals. I didn’t buy it. Years later, I fell in love with British annuals and I’ve got a whole shelf of them now – I’m quite proud of my little collection, including the very first Doctor Who one – but there’s a hole where the Sapphire & Steel annual should be, had I just paid the stupid five bucks for it.)

Anyway, a friend later found a fanzine called Time Screen, and there, in issue 4, was an episode guide, of sorts. (And yes, it was Time Screen and not Dreamwatch Bulletin. Don’t believe anything you read on Wikipedia.) The article’s writer proposed names for the six stories, and even though the writer was very clear that these were unofficial titles, they somehow stuck. For ages, they were given an absurd level of status and reprinted in countless other magazine articles, and books, and once the internet got started, every ASCII fan page used them. These DVDs I have are A&E’s 2003 release of the series, and right there on the back of each case, there’s the title that some fan concocted in 1989.

This wouldn’t be that huge of a problem if the fan had come up with good titles, but he didn’t. Four of his titles end up spoiling plot points and cliffhangers. (The one for story six is particularly infuriating.) This serial is three hours long, and if you ever watch it with the fan title in mind, that title will make sense about five minutes before the end. Right after you’ve finished snickering about the poor visual effect.

If you live in the southeast and you enjoy eating, then you definitely need to read our food and travel blog! Check us out at Marie, Let's Eat!
<span>%d</span> bloggers like this: