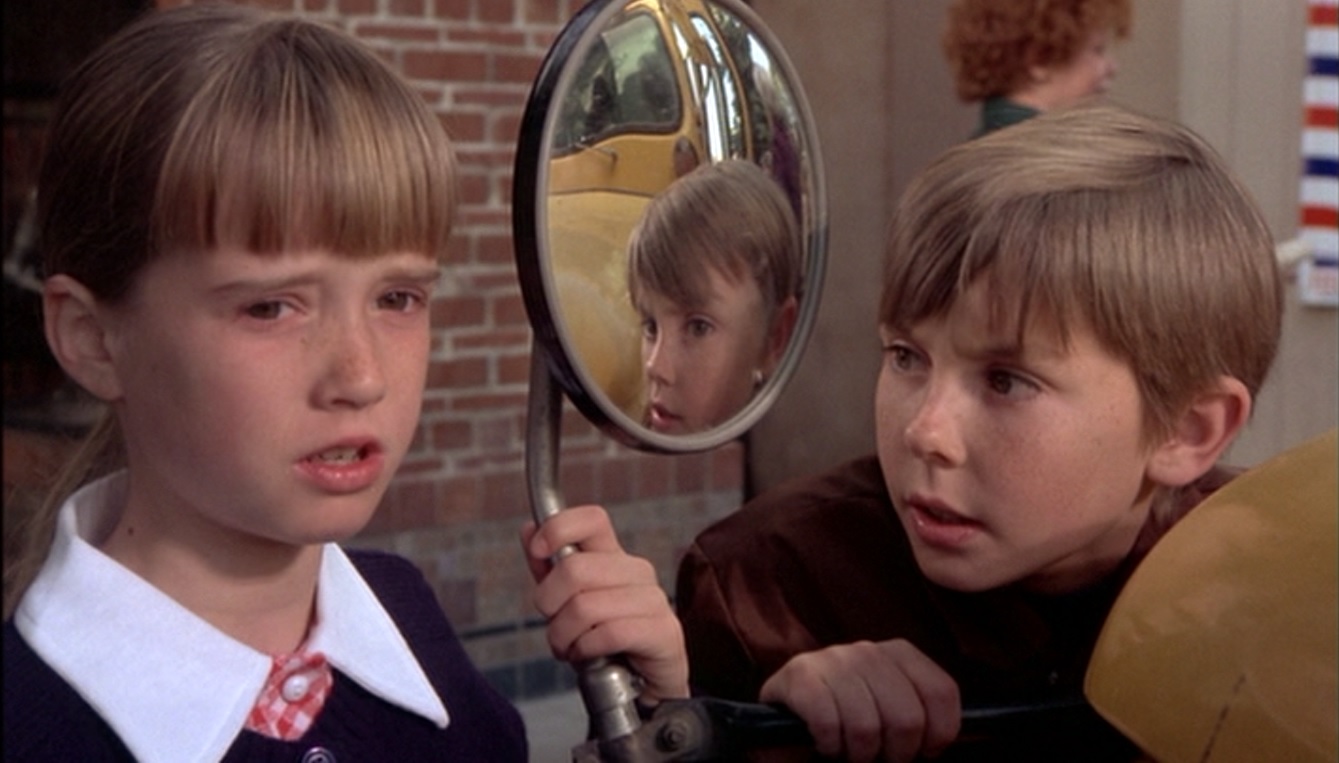 You know who has the best rogues’ gallery in all of TV and films? I’m not talking about the fictional villains, but the actors who played them. The answer is indisputably Tony and Tia from the two Witch Mountain movies. Their opponents were played by Donald Pleasance, Bette Davis, Christopher Lee, and Ray Milland. That’s Blofeld, Baby Jane Hudson, Count Dracula, and that mean guy from Love Story. Pure 100% evil.

And on top of that, the three main adult parts in the first of the two films, Escape to Witch Mountain, are played by Pleasance, Milland, and Eddie Albert as Jason O’Day, the gruff-but-kind old traveler who helps the young castaways. All three men played villains in Columbo in the seventies. If you’re like me and enjoy just sitting back and watching great actors at work, even when the material isn’t exactly challenging, this movie is a complete pleasure. 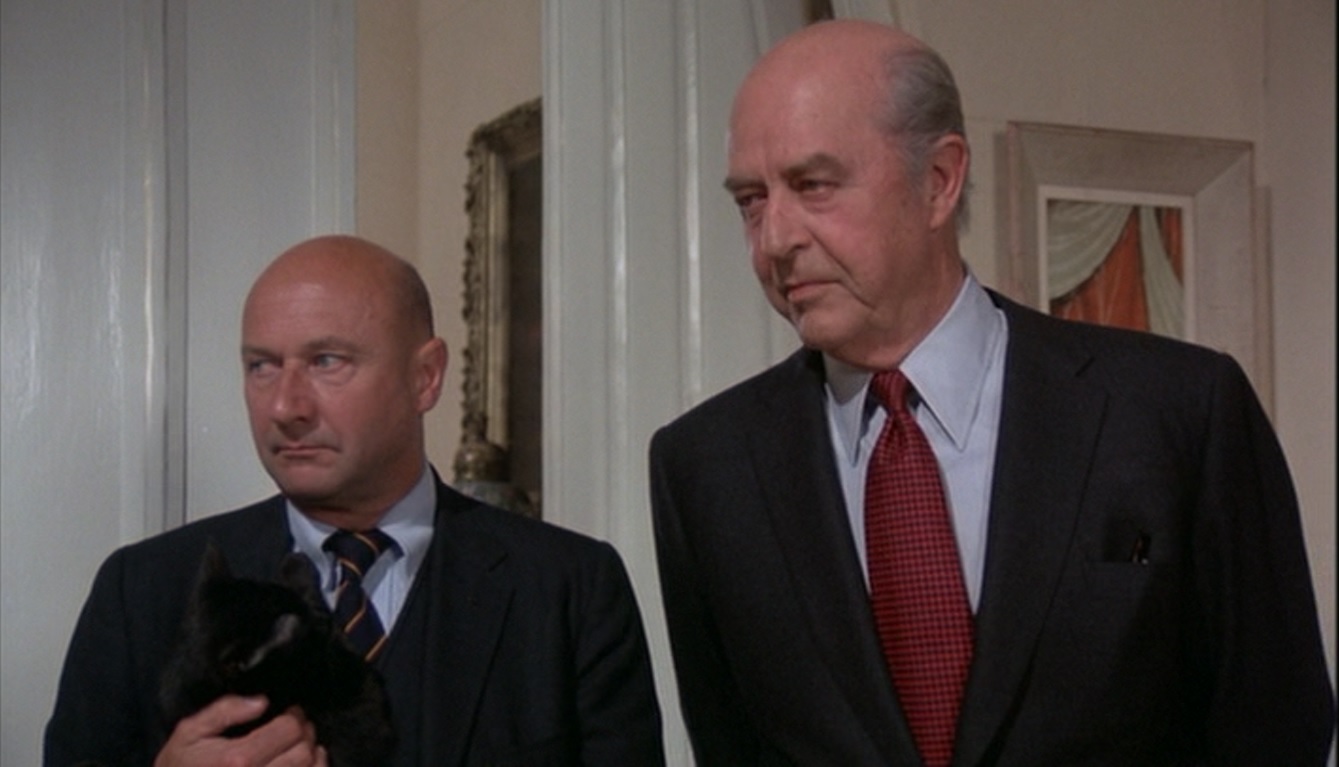 We were having a long and very lazy Saturday afternoon, so we went ahead and watched this classic today instead of tomorrow morning, and our son just adored it. Escape to Witch Mountain is based on a 1968 novel by Alexander Key, who wrote more than a dozen of these sort of light science fiction adventures for young readers and which we used to devour as kids in the seventies. Him, John Christopher, Madeline L’Engle, and C.S. Lewis were my poison in the tail end of that decade. Yours as well, I bet.

As a screenplay, it’s note-perfect, a flawless 97 minutes without a drop of fat or padding. The director, John Hough, was new to Disney but he already had a pretty fun career, working on favorite TV shows like The Avengers, The Champions, and The Zoo Gang, and directed Hammer’s glorious guilty pleasure, Twins of Evil. Teamed with Disney’s first-rate special effects team – who let the side down a little this time – three veteran actors and two extremely good young kids, he put together a terrific movie.

Sadly, the effects are just not up to Disney’s standard this time. Most of the work before the climax is practical effects done with wires, but sadly I swear I see a new wire visible every time I have watched this movie. I’ve noted with some sadness the way that the print quality of Ray Harryhausen’s films always gives away the “surprise” of something magical about to happen, but that’s nothing compared to the composite shots of the flying Winnebago and upside down helicopter in this movies’s climax. It’s a shame for adult viewers, but kids probably won’t notice. Ours didn’t. 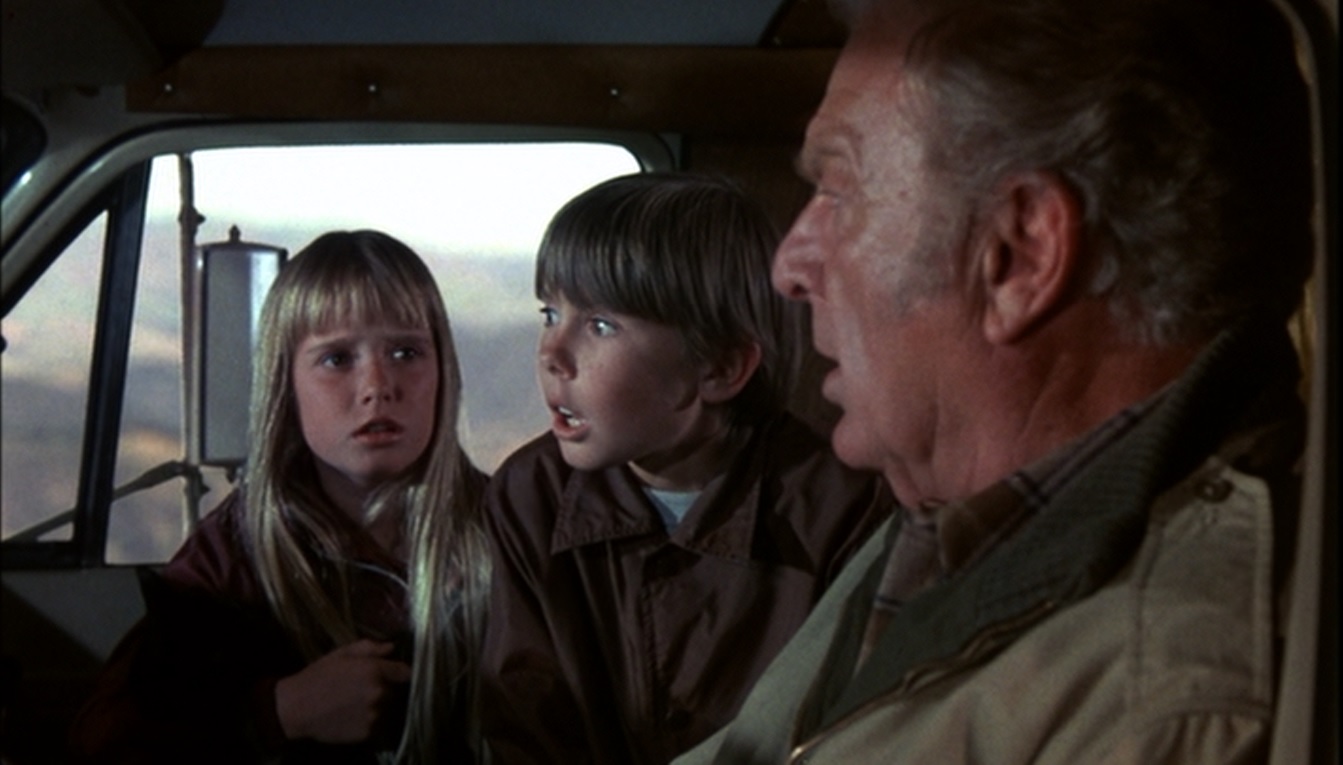 One reason I enjoy this film so much is that it gives kids some believable young heroes with whom they can relate. Kim Richards and Ike Eisenmann are extremely good in this movie, even managing to convincingly convey their returning memories as actual memories and not “brand new information” that it’s time for the script to provide. Eisenmann was still a novice at this time; Richards was an industry vet by the time she made this at age ten.

The memories slowly returning, done so well by a cute effect that sees the flashbacks becoming increasingly clearer as the film progresses, really helped keep our son’s attention. He was fascinated by the story and curious where it was going. There’s some typical Disney slapstick along the way – there’s a bear, and a truck that crashes into a lake – and it’s used as perfect punctuation at moments where the explanations are a little talky or the excitement gets a little much. It’s a really great film, and I believe it’s much better than its sequel, but we’ll watch that in a couple of months and see what he thinks.