Y’all know me; I’m all about scaring the daylights out of kids. But I wonder whether the Traveling Scarecrow Maker might have been a step too far. The tone is so dark, so downright off that it doesn’t feel like the same program any longer. I think it’s still pretty good television, but this doesn’t feel like Worzel Gummidge anymore. The only concession to the show we started watching is Jon Pertwee babbling in gibberish and getting his words wrong.

I’m incredibly glad we did not start watching this program at the beginning of the blog. At nine, our son’s at the right age to handle a villain who is not played for laughs. At five or six? He’d be in tears, asking why one of his favorite funny programs had betrayed him so badly. Interestingly, I noticed that the DVDs of the twelve episodes in the next and final series are labelled G by Ireland’s Film Censor’s Office and U by the BBFC, while series five are stamped PG for older kids. 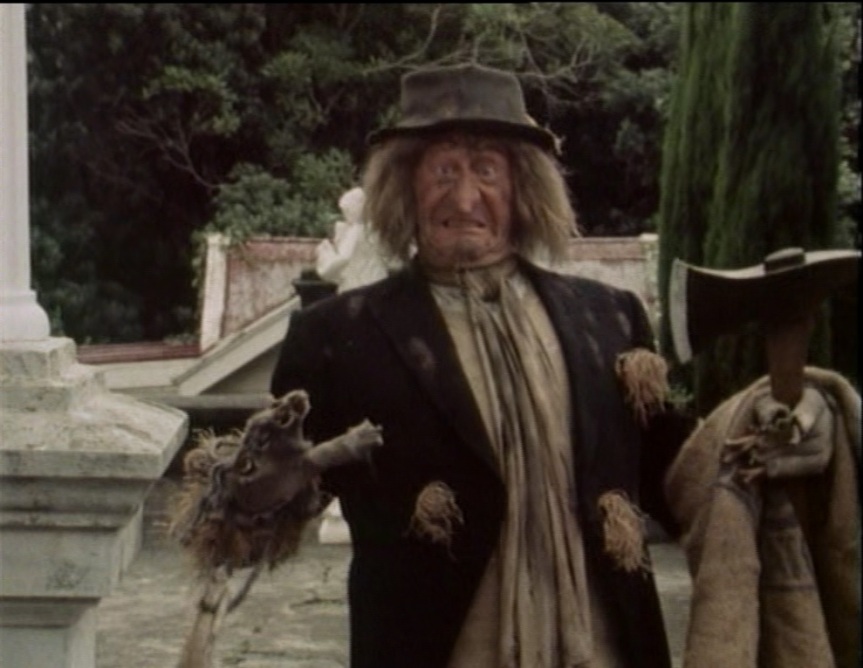 To drive the point home, the plot of this story – again the first half of a two-parter – is incredibly like the H.R. Pufnstuf tale “The Mechanical Boy”. There, Witchiepoo captures Jimmy, hypnotizes him into thinking he’s a robot, and sends him off to bring back Freddy. Here, the Traveling Scarecrow Maker captures Worzel, hypnotizes him into thinking he’s a zombie, and send him off with an ax to bring back Aunt Sally in pieces. And it’s not just the grim fate in store for the helpless quarry: Jack Wild walked silly and talked funny and punctuated the action with a goofy song and dance number. He isn’t a threat. Zombified Worzel even somehow has nasty razor-sharp teeth, and there’s certainly no dancing.

I enjoyed it, and so did our son, but I’m about ready for this show to get silly again.