So there was this girl in college. There always is.

Her name was Samantha, and she thought the Madison Avenue advertising frogs were about the funniest things ever created. We spent several months asking each other to lunch by saying “A little something from the grill, Jill?” and responding appropriately. Once she explained it to me, anyway. I had never seen the movie. 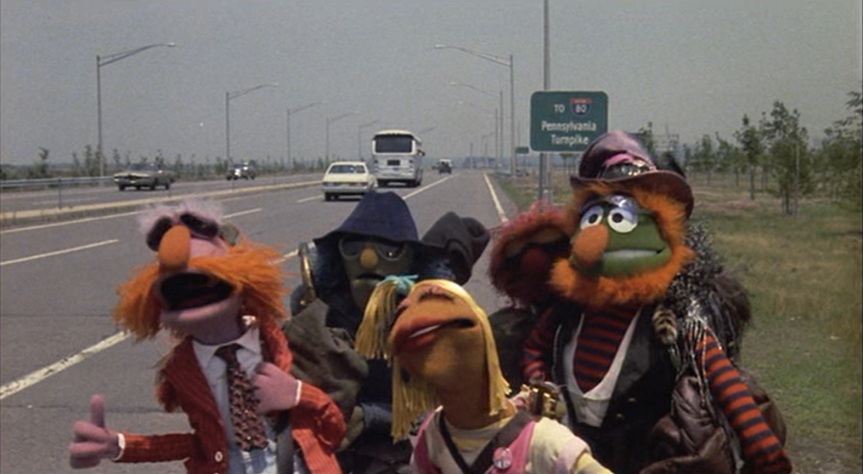 When I hit teenagerhood around 1984 and was at my most insufferable, the Muppets were among many, many things I lost interest in, as teenagers often will. So I passed on The Muppets Take Manhattan. I didn’t see this movie for many years and, to be honest, I found it really disappointing when I finally did. Watching it with our son this morning didn’t change my mind. It’s a very mediocre outing for the gang, easily the least of the first three installments. It is punctuated with some incredibly funny moments, as it should be, and our kid howled with laughter several times, but by the end – possibly in part because of that endless end – he was halfway to tuning out.

Focusing on the bright moments for now, there are the advertising frogs, who really are hilarious. There’s Joan Rivers, painting makeup all over Miss Piggy. There’s the narrowed-eyes variant of Miss Piggy, finally losing her temper after several raging incidents of jealousy, going after a mugger on roller skates. In point of fact, Miss Piggy is really the best thing about this movie, and the mugger scene comes to a brilliant climax with one of the funniest moments in any Muppet outing ever, when Gregory Hines attempts to mediate / escalate their argument. If we woke the neighbors roaring over this sequence this morning, we apologize.

When I put the calendar for our blog together, I couldn’t have known that this would come up in the rotation right after Disney+ added 118 episodes of The Muppet Show to their rotation. We’ve watched a few over the last several days – the triumphant and utterly amazing Marty Feldman appearance, the uncut Vincent Prince show with its closing number restored – and Manhattan badly sags after the explosive 27 minutes of lunacy in even the worst of the TV episodes. The movie starts introducing the generation of Muppets I never liked: Rizzo the Rat, the bears, the Muppet Babies. (I swear the voice actors in that cartoon were going out of their way to make every single character sound like nails on a chalkboard!) I wish I liked the human actors, but I don’t.

The Muppets Take Manhattan may be a lackluster movie, but there’s still some Muppet spirit in it. For example, during the closing wedding scene, some doves are released. Our son asked “Where did those birds come from?” and I replied “The Creature Shop.” Wokka-wokka-wokka!