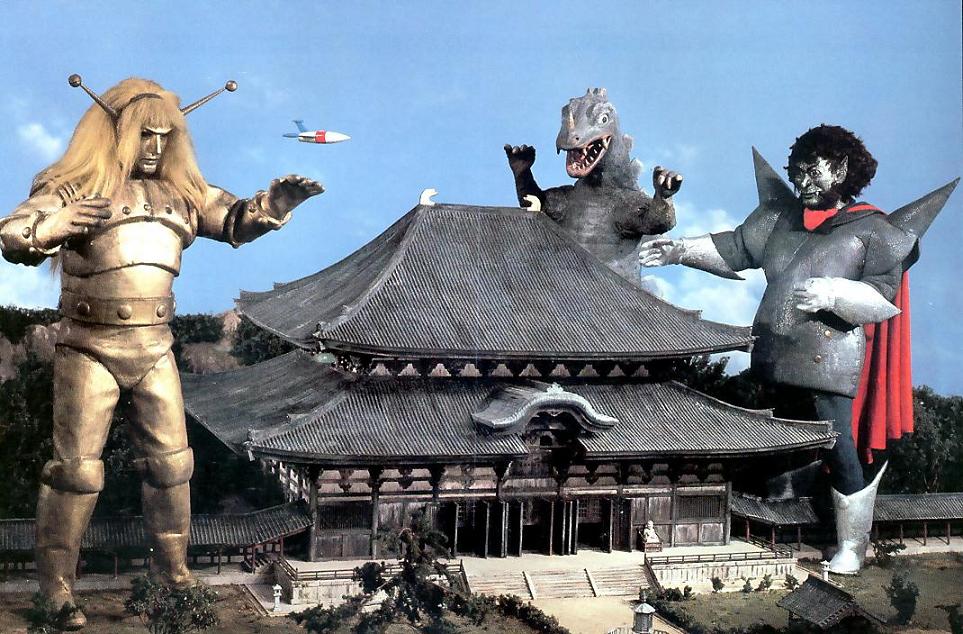 We’re not watching The Space Giants for our blog, and that’s a shame. I’m trying to set an example and watch only films and series that have been legitimately released for purchase, and, sadly, this program has never been available in English on home video. In fact – and I would welcome a correction – it really looks like the only two Japanese sci-fi shows from the sixties and seventies to ever have been released in English on DVD in North America are Ultraman and the painfully stupid Johnny Sokko and His Flying Robot. Quite a few others have been released legitimately with English subtitles, like Ultra Seven, Iron King, and Red Baron, but my son is still a beginning reader and cannot manage subtitles quite yet.

The Space Giants is the dubbed-in-English version of Ambassador Magma, a 52 episode series based on a fun comic by Osamu Tezuka. Unfortunately, this comic has also never been legitimately released in English! Can’t win for losing if you like these characters, but at least the reprints are not expensive and they’re amusing even if you cannot read the dialogue. In Japan, the TV version of Ambassador Magma beat Ultraman to the air by a couple of weeks, making it – I believe – the very first sci-fi monster series made in color in that country.

It was also made for a very small budget. A company called P Productions made it for the Fuji TV network, and they didn’t quite have Tsubaraya’s special effects know-how. This shows in unusual ways: many of the “laser” or “missile launching” effects were done with animation, and there aren’t as many monster costumes. Unable to afford a new monster suit and a new miniature landscape every week, the screenwriters came up with longer, detailed stories that focused on the human cast. The first 40 episodes of Magma are four-part serials, and the remainder told in two parts: ten four-parters and six two-parters. Typically the monster would first show up in the cliffhanger to part one and have a few small skirmishes with the hero over the course of each story before the final conflict at the climax, occasionally introducing a second monster in part three.

As I’ve said before, the fight between Ultraman and each week’s monster is the most dull part of the story, meaning each adventure stands or falls on how much fun the Science Patrol business is. In Magma, this is also true, but the human stuff is amazingly fun every week, the most addictive and watchable stuff I’ve ever seen from Japanese adventure TV. (Okay, so admittedly I have seen very little. Still.) In the series, an alien dictator named Goa (Rodak in the English dub) tries to conquer the planet using shape-shifting, identity-stealing, black-clad beings called Lugo Men. Our hero is an investigative journalist named Atsushi Murakami (Tom Mura in the English version), who has a son named Mamuro (Miko).

Things get really fun when an ancient wizard who has been warring with Goa gets involved. He has two robot assistants, a husband and wife called Magma and Mol (Goldar and Silvar). Mol/Silvar takes a shine to Mamuro and wishes for a son like him, and so the wizard creates a near-duplicate little boy robot, Gam. Oh, and all three robots can turn into rockets. It’s the most fun little wish-fulfillment show ever, and every kid pretended to be Mamuro/Miko after school, sneaking around imaginary abandoned factories and power plants with his robot best friend, battling the mysterious, hideous Lugo Men, who dissolve into blue applesauce when killed.

A very small company called Lakeside Television got the US rights to Ambassador Magma in the late 1960s, and retitled the show The Space Giants. The English language dub was offered to stations in 1970, but it didn’t show up in Atlanta (or many other markets for that matter) until the fall of 1978, when every UHF station in North America started looking closely in the syndication programming book for any program that had the words “star,” “space,” or “planet” in the title. Ted Turner’s WTCG-17, later TBS, picked it up around the time that WTCG programming started showing up on cable packages around the country.

As a kid, I came on board with episode three, and loved the show absolutely. It came on at maybe 3.30 in the afternoon. Around episode 14, with the planet suffering an amazing heat wave and drought, the robots transform into rockets, seed the clouds, and make rain, but the water that falls out of the sky is boiling hot. I pretended that rain was hot water for at least two years after that. It helped that WTCG kept the program in rotation for most of that time.

Unfortunately, the show has never been available for home purchase legitimately in America; Lakeside appears to believe that they got the North American rights in perpetuity (even the Japanese rights lapsed in the early 1990s and P-Productions returned them to Tezuka’s company to exploit and manage), and another party who drew half of a Space Giants funnybook that nobody ever saw appeared to believe that he had the exclusive rights to any North American merchandising from either the live-action show or Tezuka’s original comic book. My guess is that neither the small Lakeside nor the other party could realistically afford the mammoth legal bill that untangling the rights to such a limited interest program would involve, and nobody wanted to act first and get sued by the other. (For a very lengthy and eye-popping first-hand account of somebody who got in the crosshairs of this tomfoolery, give yourself half an hour and read this account of selling Magma toy kits on eBay.)

I’m going to put my boring old fuddy-duddy hat on now. I spent more than a decade swapping bootlegs of lots of shows on VHS myself, including this one, always telling myself I was acting ethically. Then I somehow raised two kids who did not see anything wrong with swapping the entire catalogs of favorite musicians on USB drives instead of buying the albums themselves. I tried to clamp down on that crap, but had to acknowledge my own failings on that front. Since legitimate copies are not available, I’m not going to skirt around the problem.

One of the parties in the Space Giants dispute is dead and the other hasn’t actually ever distributed very much television as far as I can tell. Sorry to be cold, but that’s how it looks. You can watch bootlegs of the show on YouTube if you like; DVD-Rs occasionally show up on eBay, but we will not watch this show for this blog because it is not commercially available. Tezuka Productions did release a 10-disc Blu-ray set last fall. It retailed for (good lord!) 50000 yen ($482.88!!), which is the sort of price I laugh about when people try listing out-of print Bugaloos DVDs that they evidently don’t actually want to sell. These Blu-rays do not contain an English language track. I very, very much hope that Tezuka Productions might work with Lakeside and release a domestic edition in English before we get too old to fall in love with it again. It’s a super little show that I’m sure my son would adore.

For a whole lot more about the production of Ambassador Magma and distribution of The Space Giants, please see this fabulous article by August Ragone and Bob Johnson here: http://www.scifijapan.com/articles/2007/08/27/the-space-giants-series-guide/

3 thoughts on “What We’re Not Watching: The Space Giants”