So midway through its second season, Farscape had a big, complex epic storyline about court intrigue on an advanced planet with very fragile relations with powerful neighbors in its part of the cosmos. It is the sort of precarious situation that this gang of misfits is certain to make worse, and do they ever. “Look at the Princess” is tremendously fun, piling one completely bizarre complication on top of each other, while depicting one of the most truly alien civilizations we’ve ever run into. This gang may look like us, but they’ve used their tech to come up with downright wild and outre solutions to the problems of ensuring peaceful dynastic succession.

Along the way, we get involved with double agents and triple agents and brutal solutions to internal politics, acid baths and old enemies. Our son was pleased by the acid bath and far less pleased with the return of Wayne Pygram as Scorpius. Unfortunately, a big brawl in the acid bath room, where Scorpius, D’Argo, and John join forces to take down a big mean alien agent with disintegration breath, was literally the only thing in these three hours that our son enjoyed, but I thought the whole thing was great.

It certainly wasn’t flawless – I think I’d have preferred it if they just gave Virginia Hey a couple of weeks vacation rather than distract from the court intrigue with her storyline, which doesn’t really go anywhere – and the alien city suffers from what I call “the Peladon problem” after a planet used a couple of times in Doctor Who. It never gels as a genuine environment, with no sense of spatial continuity between the rooms and gardens that we see. But it’s still a very, very good story, and a fine point to end on. 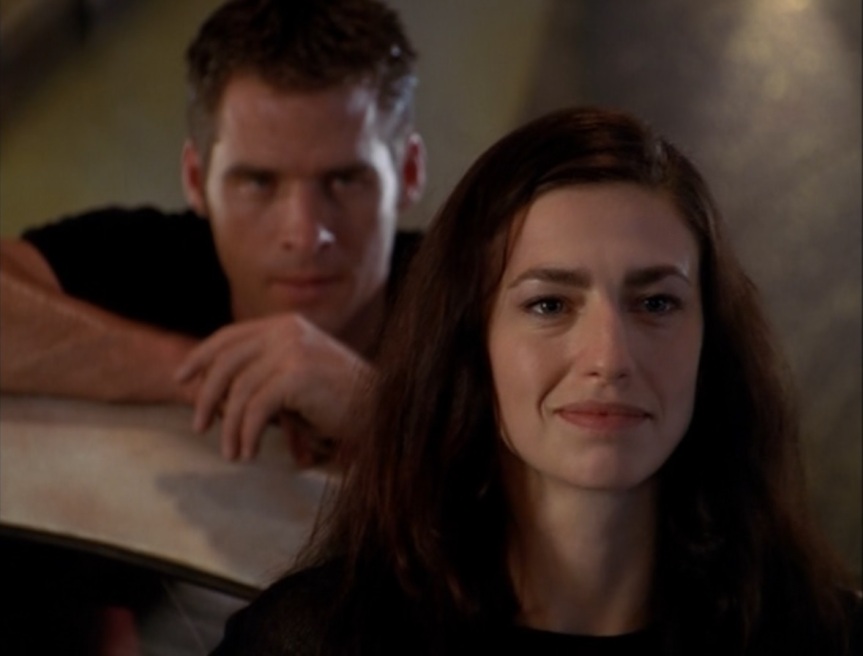 This is our blog’s last trip to the world of Farscape, although I certainly plan to continue with the show myself. The kid just simply does not enjoy this show anywhere as much as I hoped, although he has had a ball with some of the sillier installments. Reading ahead, it seems like the show takes a much more adult edge from about this point forward, so this is a good place to retire things. For the old romantics in the audience, I think I ended on a beautifully high note. John and Aeryn use an odd little “compatibility” drink that the civilization uses to quietly acknowledge to the audience – although not to each other – that they really can make things work as a couple if they can just stop being stupid to each other. Claudia Black smiled and my heart melted, and the kid missed it, because their testing smooch had him hiding under a blanket.

Well, that was just tremendously entertaining and fun. I really like how this story ends with very little resolved in our heroes’ favor, and more problems than they started with. Scorpius has taken over the role of the ruthless lieutenant obsessed with Crichton’s capture, and Crais is now a wild card, flying around in the newborn Leviathan ship. There are so many great moments and character beats throughout. I enjoyed it hugely, and our son went on some endless rant about how this five-parter totally blew his mind and made him feel like… I dunno, he started yammering about infinite armor and explosions, and I quit listening, but I’m pretty sure he liked it.

Overall, this has been a pretty solid success with me so far. There were admittedly some really weak episodes in season one, but I like the characters a lot and the more intricate storytelling of this longer story that introduced Scorpius shows what they could do when they got away from the Trek-lite approach of telling one-and-done stories about this strange planet or that with basic adventure TV plotting. I frequently didn’t know where this was going, and while it didn’t honestly surprise me a huge amount, I can bet that it well in the future.

That’s all from Farscape for now. We’ll put it back on the shelf to keep things fresh and resume season two in late November. Stay tuned!

As I’ve mentioned in a few recent posts, we’ve been talking about multi-part stories up front instead of surprising our son with cliffhangers. What seems to be part four of five – and the finale of the first season – ends with a completely splendid one. Our heroes are backed into a corner, and Scorpius is closing in, and they’ve risked everything on their one way out, and it all falls apart on them. It’s wonderful! I’d have loved/hated having to wait three months for the next episode. The kid’ll just have to wait six hours; he can stand it.

Probably because this was made before they knew for sure they were coming back for a second year, just about everybody who might be dying on this possibly-suicide mission gets a farewell scene with another character. I loved the way it acts like it’s building up to John and Aeryn sharing a big final moment, only to have them briefly say “I wasn’t going to say goodbye.” “Neither was I.” Aw, my heart melted. Hope it ends brilliantly.

Early on in this episode, D’Argo, suffering from massive allergies to some alien plant life, says “Let me explain to you what is going on inside my nose right now,” and it’s all downhill from there, but that is an amazingly good line and the dropoff isn’t too steep. It’s one of those beauty and the beast stories where it’s the beauty that’s the problem, but then there’s a big twist, and then another one, and it all gets nice and delicious. Marie suggested it’s like one of those ETA stories on Reddit: everyone’s the asshole.

This seems to be effectively part three of five, a one-off between two-parters that has more machinations between Scorpius and Crais going on while they’re meant to be working together to find the fugitives. As part of our resolution to keep the cliffhangers from driving our son to distraction – see what happened with us on Doctor Who two nights ago – I suggested that I could let the kid know up front if we’re in a multi-part story, assuming I know. Then I spent the last half of the episode worried that it would end on a cliffhanger after all – it didn’t – which took me out of the experience, instead of him!

The kid started this evening with more grumbling. He indeed got the brisket for lunch, and enjoyed it, but after a rousing afternoon of play and comics and Garfield and Cretaceous Camp, wires got crossed and he got rice and beans for supper instead of fries, because we never give this poor underprivileged child anything he wants to eat, and then put Farscape on again. “We watched that this morning,” he protested, expecting the next Doctor Who, and then he remembered. “Oh, wait, it was a two-parter, and I hate two-parters.”

“Could be a three-parter,” I suggested, “then you’d like it even more.” And he gave a heavy sigh and settled in for one of his favorite episodes of the series. He loved this one to pieces, as well he should, because it’s a very exciting hour with a lot of double-dealing and a fine shootout at the end.

Things really turned around for him when Scorpius straps Crichton in for another torture session in his mind-probe flashback chair, and Gilina has programmed it to instead display a false memory implicating the Lt. Gerard dude, Crais, as withholding the secrets of wormhole travel that Scorpius wants. So Crais instead gets strapped in it, and it’s there that the baddies learned that Crais murdered another Peacekeeper officer in episode eight. I can’t guess what’s going to happen to Crais from here.

The story ends, inevitably, with Gilina getting killed and Scorpius getting away. The poor heartbroken girl. It’s a really sad and tragic ending, played very well, and as soon as the credits started rolling, our son had to tell us about this great idea he had. He’d punched the air and laughed all through the hour, both laughing from excitement and laughing from some of the bizarre comedy back on the ship, where we are reminded that Rygel farts helium. But never mind the sad ending, because he figured that what Crichton really should have done in the mind-probe flashback chair was remember old Simpsons episodes.

Funny how our kid never objects at all to two-parters if he’s enjoying the adventure, as he did with the Silurian story on Doctor Who that we watched at the beginning of this week, but if he doesn’t like it, I think it’s the promise that there’s more unhappiness to come that rankles the most. Poor Crichton spends about half of this episode strapped to a mind-probe flashback chair, the prisoner of the sadistic villain Scorpius, played by Wayne Pygram. I didn’t think he showed up until the next year. Glad to see him; regular readers know that I do love a good villain, and Scorpius impressed me hugely when I first looked at this series many years ago.

The story this week is that Crichton and Chiana sneak into a Peacekeeper base to get some medical supplies for the ship. They’re helped by Gilina, Crichton’s one-shot space girlfriend from “PK Tech Girl”, but Scorpius immediately spots Crichton as an imposter somehow. The installment ends with Chiana back safely and the medical supplies delivered – Aeryn had been badly injured in the previous episode – but Crichton’s still a prisoner and Scorpius has even called in the Lt. Gerard character, Crais, just to make everything worse. Our son was so aggravated that he kicked the sofa with a scowl. Then we learned our favorite hot dog place has cut its Saturday hours. How rotten! Hopefully he’ll enjoy some brisket for lunch instead and part two will be an improvement…