It’s largely forgotten today, but if you want to sit down with a kid and enjoy a downright insanely entertaining movie, Message From Space will certainly do. After those last two turkeys we watched for this blog, this was both a relief and a pleasure. This is a fun, fun movie, almost tailor-made for slow Sunday mornings for kids to watch on a UHF channel while Mom and Dad are still asleep.

You know how Star Wars is really inspired by Kurosawa’s The Hidden Fortress? This is a movie that doesn’t pretend. It’s The Hidden Fortress in space, gleefully pilfering its look and set pieces from Wars and running at breakneck speed with explosions and sword fights every five minutes. Anybody who’d get bored watching this film didn’t have an attention span in the first place.

The plot goes like this: evil space villains have conquered a peace-loving planet, and the defeated people’s ageing leader sends eight seed pods into space to recruit help. The baddies follow the trail from their region of space into ours, and while the seeds collect a rag-tag group of misfits to fulfill their destiny, the villains learn about the beautiful planet Earth and decide to conquer it next. Among its international cast, it’s got Sonny Chiba and Vic Morrow, and a young American actress named Peggy Lee Brennan in a role that looks like it was written for Suzy Quatro.

Our son adored this film, of course. I mean, if you like Star Wars, here it is again, only with old-fashioned miniature effects instead of computer-controlled one, and with a climactic sword fight that is roughly a billion times better than the one Dave Prowse and Alec Guinness had. It’s got both a Vader Villain and his creepy old silver-skinned mother in a wheelchair, beat-up and dirty little one-man spaceships, cocky hotshot pilots, a musical score that sounds a whole lot like John Williams, and a Death Star trench climax that’s pilfered straight from the original, only using about a quarter of the screen time and including giant doors in the tunnels that threaten to close right in front of the quasi-X-wings. 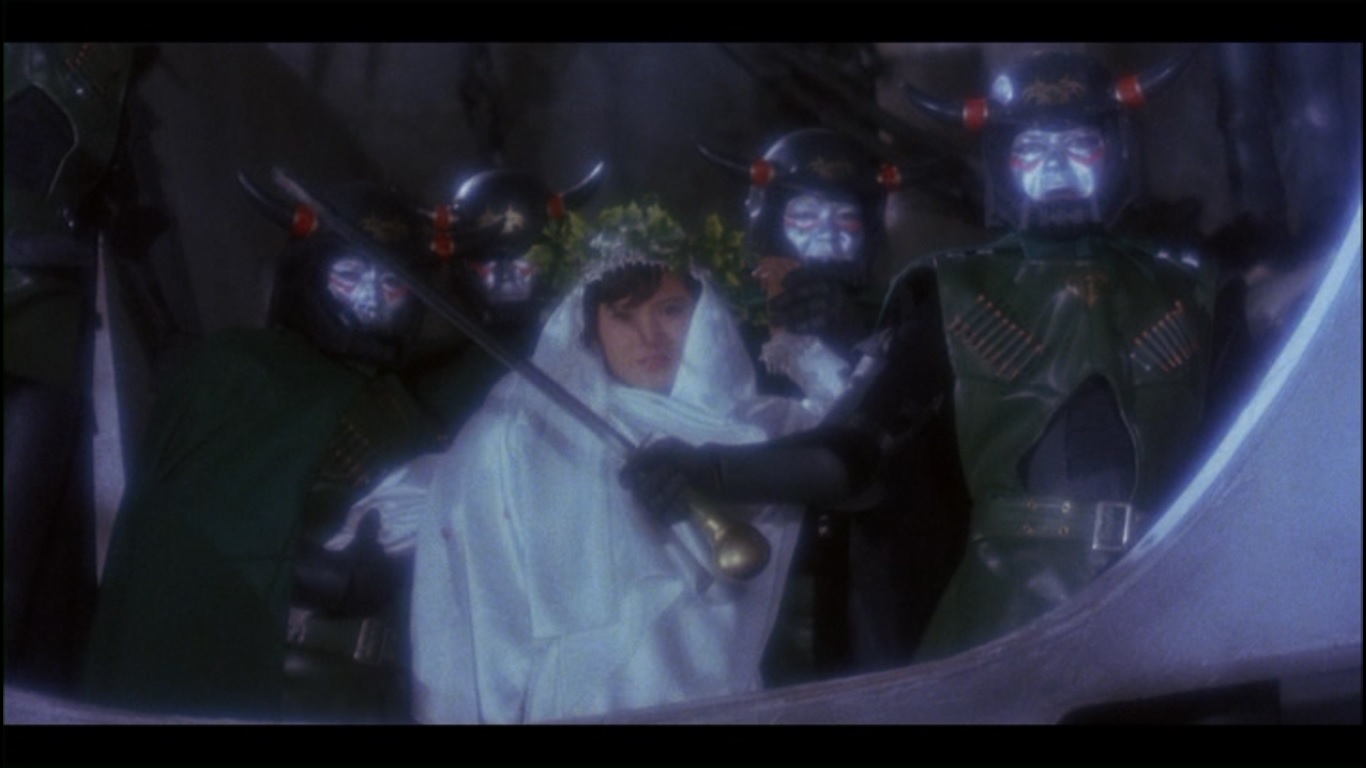 Bizarrely, my son took exception to one little bit of design. The whole affair is ridiculously sumptuous for what could have been a cheap knock-off. According to a book by Stuart Galbraith IV, Japanese Science Fiction, Fantasy and Horror Films, it was actually the most expensive film ever made in Japan up to that time, and you can see it all onscreen. The costumes, sets, spaceships, and effects are all completely over the top and outlandish and I think they all look splendid, but for some reason he grumbled that the villains’ gigantic flying fortress – their Star Destroyer, basically – was “a hunk of junk,” and kept calling it that whenever he wasn’t whooping, laughing, or shouting “Oh my goodness, they’re killing everybody!”

So when the flying fortress meets its destructive end, he jumped off the couch in ecstasy, and bellowed “I TOLD you it was a hunk of junk!” He was happier about that than the downright amazing end for the chief Vader Villain, weirdly.

Message From Space sports a co-writing credit for Shotaro Ishinomori, a comic book artist who spent the seventies being consulted by lots of TV and movie producers in Japan, and collaborating on all sorts of shows that look incredibly fun and/or silly. This is absolutely a fun movie, one I was happy to revisit. It’s not high art, but neither’s Star Wars, and every six year-old in the galaxy should see it.

Over the last several months of writing this blog, I’ve been cross-checking actor and director credits in IMDB while also searching around for new ideas for films to watch together. If I’d ever heard of Disney’s Treasure of Matecumbe before last year, it’s news to me. Definitely one of the company’s lesser-known features, it’s a quite good family adventure film, a search for gold in 1870s America.

As befits a movie that’s flown under the radar, it’s also the victim of some considerable misinformation. It was released on DVD in 2008 under the Wonderful World of Disney label, and a few sites have stated that this was made for that long-running TV anthology. It turns out that it was not. I did one last little double-check and bit of research before writing this, thank heaven, and ran into this article at TCM, written by a friend-of-a-friend, Nathaniel Thompson, which explains that it did get a theatrical release in the US. A little more checking and it seems it debuted on July 9th of 1976, and showed up on the TV series a good eighteen months later, where it must have been edited by about fifteen minutes, because this is a packed movie, very nearly two full hours.

The young stars of the film are Johnny Doran, who had impressed me very much in that “explaining death to kids” episode of Isis, and Billy “Pop” Atmore, who was a regular on The Mickey Mouse Club. Among the grown-ups, a really impressive cast including Robert Foxworth, Joan Hackett, Peter Ustinov, and Vic Morrow. I was very amused by one little cameo. I’ve been noting how certain directors keep coming back to use actors again, and Rex Holman shows up for thirty seconds as an informer in New Orleans. Eight years before, this film’s director, Vincent McEveety, had used him as Morgan Earp in the one Star Trek episode I actually enjoy, “Spectre of the Gun.”

Like many of Disney’s travel movies, this one has an episodic feel to it, and about halfway through, there’s a musical interlude when the party docks at a river landing where the menfolk haven’t seen any women in heaven knows how long. I love watching movies with my son for many reasons, but a big one is that he will often appreciate something that I never could without him. If I were reviewing movies that I watch on my own, I’d grumble that this bluegrass hoedown is completely superfluous to the story and unnecessary. But it turns out that it’s perfectly timed and very welcome. He was up on his feet and dancing along and when, inevitably, people get dunked in the river, he was roaring with laughter.

This isn’t a movie with very much levity and precious little of Disney’s seventies slapstick. In fact, Morrow’s character is far more realistically evil and cruel than your typical Disney antagonist, and guns down a man early in the story. There’s even a quite surprising scene where a character is rescued from being lynched by the Klan, which I certainly didn’t expect to see in a Disney movie. And the ending has a very surprising undercurrent. I don’t think children will really understand just how grim it actually is, but this certainly isn’t Keenan Wynn getting hoist on his own petard by a Volkswagen. So when the opportunities for laughs did come, we appreciated them.

I was really impressed by the production, which took the actors on location in Kentucky, Florida, and California, and subjected them to swamps and lashing rain. There are some obvious stunt doubles and stock footage and animated swarms of insects and painfully poor rear-screen projection, but they really did throw millions of gallons of water on big name actors and stick them on boats in the Everglades. You’ll watch this and think it’s a huge shame that they only captured half the dialogue shots on location and filled in the rest in the studio.

Anyway, Ustinov plays a traveling medicine show “doctor,” and his small river boat gets blown up, which our son strangely insists was the scariest part of the movie despite looking to the grown-ups like nothing at all consequential. Then the climax, in which Morrow and his henchmen square off against an angry Everglades tribe, had him cheering and loving it, while I gulped, knowing the grisly fate that awaited the villains. You can never tell with kids, which is part of what makes this so fun. Five-nearly-six might have been a little young for this movie, but he has seen a lot of films and action-adventure TV and might be a little more mature than many viewers his age, so if you’re thinking about showing it to your own kids, bear that in mind. I’m glad that we watched it and he certainly enjoyed it.