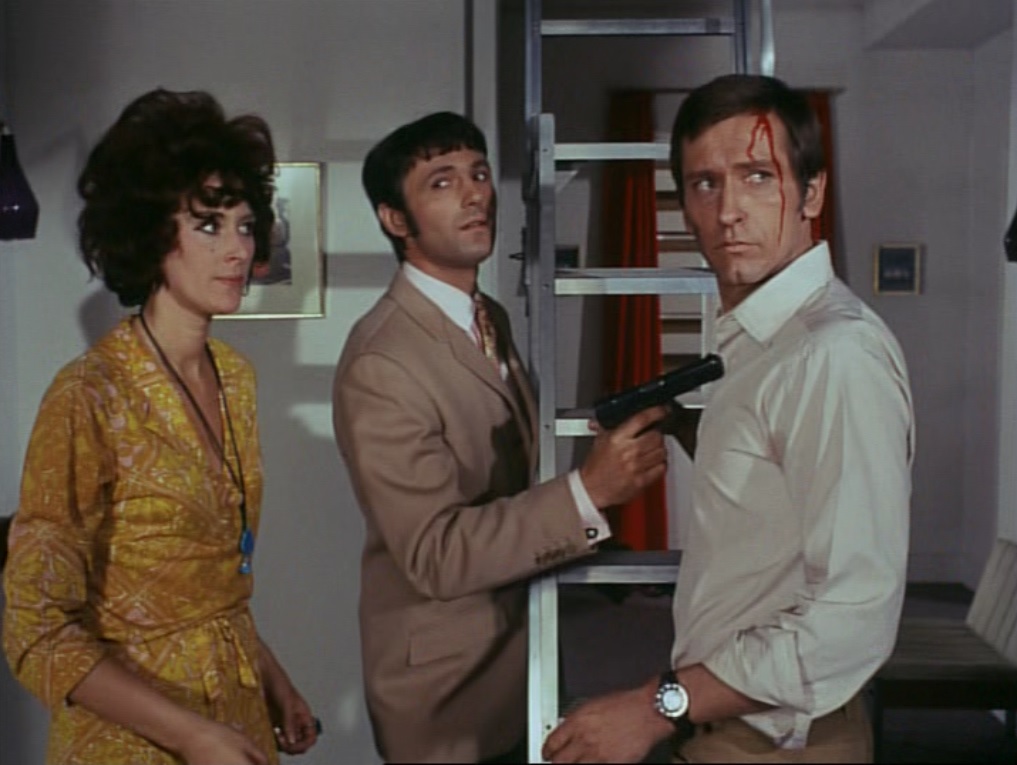 Easily the best of the four episodes written by Philip Broadley that we have seen so far, “Black Out” had our kid completely thrilled. At one point, there’s a fast cut between Stewart getting his gun ready and the baddies’ henchman doing the same and he said “wow!” During the countdown at the end, he was about ready to pop like a cork.

It has a great opening hook, too. A man is found in a Mexican desert with no memory of how he got there. He tells the local policeman, played by Paul Stassino, that he’s a chef and food critic and that the last thing he remembers was going to see an opera in Covent Garden three days ago. Some villains are using a memory-wiping drug, but why the heck do they target this guy and drop him on the other side of the planet? Stassino’s only in this one for a small scene, but Neil Hallett and Sue Lloyd play the villains, with Stuart Damon doing some uncredited voiceover work as an American broadcaster reporting from Cape Kennedy.

Interestingly, Stewart is walking with a limp in this episode and is using a cane in most of his scenes. Evidently Joel Fabiani injured himself, but there aren’t any deep-dive Department S blogs out there packed full of production minutiae, like the indispensable Randall and Hopkirk (Declassified), to satisfy my curiosity as to what happened! 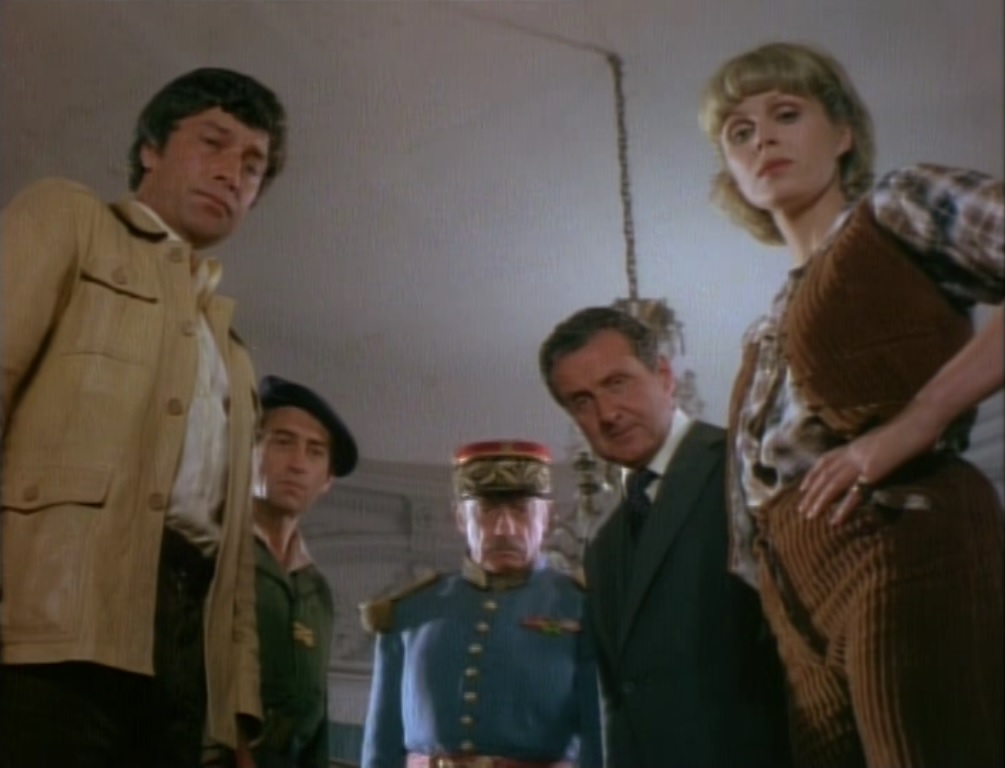 Brian Clemens’ “K is for Kill” is the only surviving two-part Avengers story. The very first two episodes of the series, from 1961, “Hot Snow” and “Brought to Book,” each deal with the same set of criminals, but those aren’t available for us to see. I think that “K is for Kill” is a more obvious-to-the-viewer feature-length adventure, dealing with another company of Russian sleeper agents, but this bunch have a curious distinction. They’re all in their sixties and seventies, but thanks to a secret that had been closely guarded by an unknown monk in Tibet, they appear to be in their twenties. Something has activated some of these soldiers and, with very out-of-date information and maps, they begin a guerilla assault on abandoned chateaus and war museums in the rural country west of Paris.

Here’s the weirdest thing about “K is for Kill”: Mrs. Peel is sort of in it. Thanks to some repurposed footage from two decade-old color episodes and the uncredited voice of Sue Lloyd, imitating Diana Rigg, on the telephone, talking with Steed, she makes a strange and utterly unnecessary appearance in the story. We open with the Russian army in Tibet in 1945 learning about the eternal youth experiments, and then it picks up twenty years later, with a strange mass murder in a small English village. Steed reports in to Mrs. Peel, suggesting it’s a case that they may never solve.

Now this, you’d think, is the setup to have Diana Rigg come back for the show’s big two-part adventure. Except Diana Rigg didn’t seem to be all that interested in action-adventure TV at that stage in her career. So when there’s another weird killing in France in 1977, Steed phones our heroine, who’d seen the papers and was expecting his call, and he lets her know that he’s off to the continent. And shockingly, she tells him that she’s changed her name and isn’t Mrs. Peel any more! Well, call me judgemental, but if Air Ace Peter Peel isn’t in the picture anymore, then what the heck’s Emma doing not beating up Cybernauts and kicking diabolical masterminds across rooms?

Well, maybe it’s for the best. This is an adventure where armies are shooting at each other. There isn’t really a huge amount for Purdey and Gambit to do anyway. If they’d have dropped Mrs. Peel into the story, they might as well have left these two back in England…

Our son enjoyed tonight’s episode of Randall and Hopkirk (Deceased) much more than the previous one, but it still left him cold for a good while. The problem is that Ivor Dean’s character of Inspector Large jails Jeff on suspicion of heisting half a million pounds of very used notes that were en route to be destroyed in a furnace. Donald James’s script leaves it open as to whether Jeff knows a lot more than he’s saying… and he’s saying nothing, not to Marty, and not even to his attorney, played by Sue Lloyd.

Once everything comes out in the open, our favorite eight year-old critic came around and started liking this one a lot more. He even noted an similarity between this story and the Hardy Boys episode “The Flickering Torch Mystery,” which we watched in the spring. He likes it when the police foil the bad guys’ plans to escape via airplane, apparently! 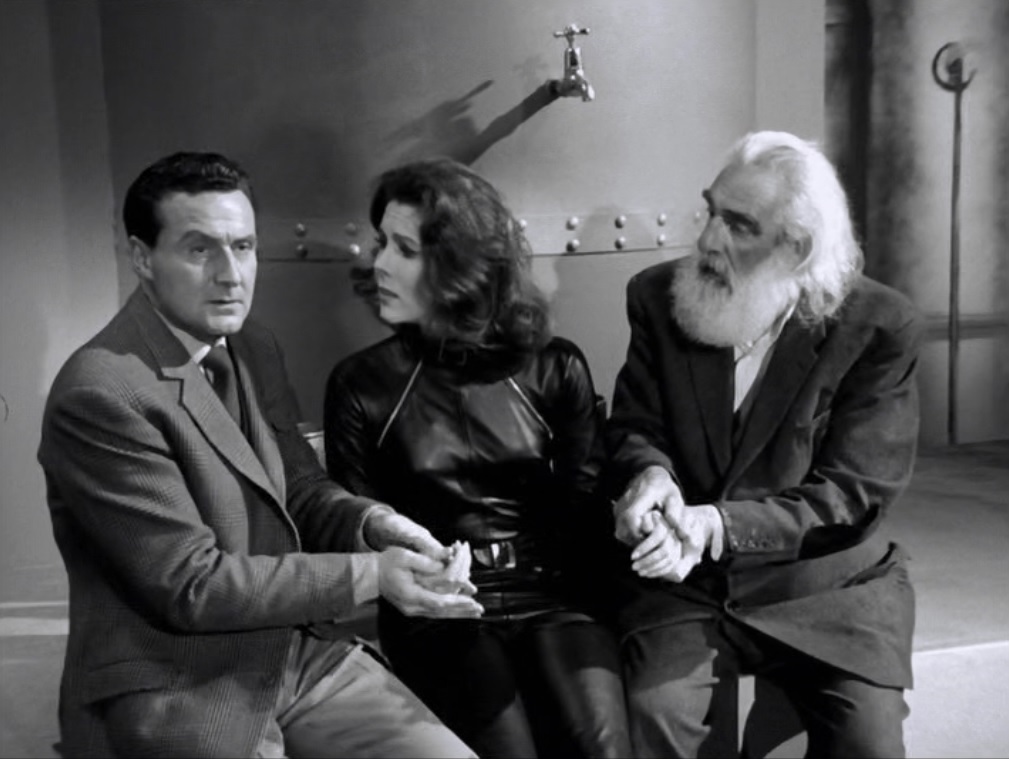 “A Surfeit of H2O” isn’t just writer Colin Finbow’s only Avengers credit; it’s his only credit, period, for any ongoing TV series, according to IMDB. He’d previously written an ITV play of the week, and would later write and direct some other obscure films, including the all-but-forgotten British adaptation of Something Wicked This Way Comes in 1972.

To prep our son for this episode, I first let him know what surfeit means, and then what H2O is. Starting from scratch this time. I also reminded him that The Avengers is full of eccentrics. Noel Purcell plays one this time out who’s getting ready for the next Great Flood, building an ark, shouting “Hallelujah” in every scene, and writing letters to the Times. We also get another great only-in-Avengerland business, a winery called Grannie Gregson’s Glorious Grogs, which is a front for villainy.

Unfortunately, all the prep in the world didn’t keep him from getting downright angry with this story. The villain, blessed with the comic book name of Dr. Sturm, has built a weather machine and can create torrential rains over a desired location instantly. We don’t learn this plan until nearly the end, when he’s got Mrs. Peel captive in a massive hydraulic vegetable press, which was too cruel a trap for his liking. He never did learn to love the over-the-top cliffhanger traps of Batman, you may recall. The climactic fight scene, in the rain-lashed courtyard, went some way toward saving a little bit of happiness, but honestly, the fight’s a little spoiled by Purcell bellowing “Hallelujah!” every three seconds.

Apart from Purcell, there are a few notable guest stars in this one, including Talfryn Thomas and Geoffrey Palmer, each of whom we’ve seen briefly in small roles in season seven of Doctor Who. We’ll see them both again in Who before the end of the year. Sue Lloyd, who seems to have made it into most of ITC’s action-adventure shows of the day (and was a regular in one, The Baron), plays the villains’ receptionist. Even diabolical masterminds like Dr. Sturm must maintain the illusion of being a respectable businessman.

Incidentally, this was one of five episodes that were not shown on ABC in the original US purchase of the series. I think that only 21 were shown because ABC dropped all their black and white programming at the end of August 1966, but I wonder who made the decision which five wouldn’t make the cut. “A Touch of Brimstone,” famously, never aired on the network for content reasons, but somebody must have made similar decisions about the other four. For whatever reason, this story apparently wasn’t shown in America until it was offered in a package for syndication in the seventies.