I told our son that this episode of Jason King would feature a plot that they’d used a couple of times before, although not smuggling Jason somewhere in a box. “Committing crimes based on the plots of his books?” he asked. He hasn’t got the finest memory in the world, but sometimes he pays attention.

No, this is another example of somebody posing as Jason, but this time out, it’s our hero Patrick Troughton! He and Simon Oates play some organized crime types who are trying to get to a deposed Mafioso bigwig who’s hiding out in a fortress, and who, conveniently, is a huge Jason King fan. Even more conveniently, Jason happens to arrive in this allegedly quiet area of Italy to get away from reporters for a while. So yes, this is remarkably silly, but it’s done with such panache. At one point, a police inspector notes the kingpin’s fandom as though Jason’s novels are the real problem. Jason replies that he isn’t responsible for “the dichotomy of my readership.”

Overall, I think I enjoyed the Jason King series more than I enjoyed Department S, even though some of the S episodes, particularly “The Pied Piper of Hambeldown” and “One of Our Aircraft is Missing”, are better than anything in the solo run, and there was never an S episode as lousy as “Zenia”. The kid agrees, but only because he didn’t immediately remember the name Department S, and thought it was a superhero show for a minute. What was I saying about his memory?

Honestly, neither show is as good as I would hope, thanks in large part to so many downright ordinary hours penned by Philip Broadley across both series. But the more Wyngarde the better, I’d say. At their best, both shows gave us excellent examples of these fun romps, and for the most part, when they weren’t thrilling, they were usually at least competently-made and intelligent, with very good guest actors, and I enjoyed them overall. Good stuff.

I had such fun introducing our son to the entertaining world of ITC that we’re going to have some sampling mini-seasons of five other shows from the company for the blog a little later this year. We’ll start with a few episodes of Danger Man in August. Stay tuned! 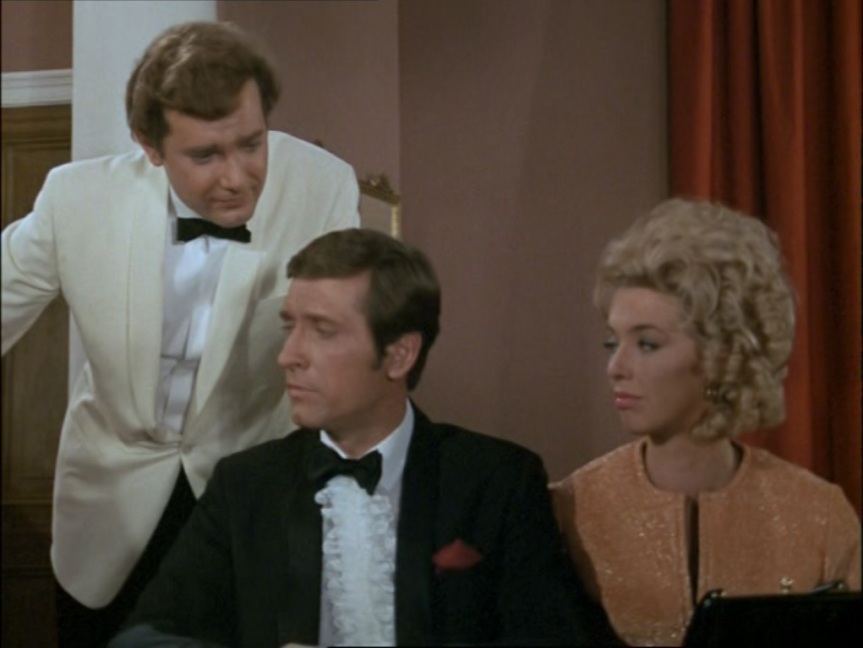 “The Trojan Tanker,” the first of ten episodes written by Philip Broadley, is the only episode of the series that I’d seen previously. I’d read a little about this one, thought it was a great hook, and was a little disappointed when I saw it. It promises a great, weird mystery but delivers a pretty ordinary crime story with Patricia Haines and Simon Oates planning a huge heist. Ordinary’s not necessarily bad when it was made by ITC in the period, because they did it better than anybody, but I was hoping for more. Our son enjoyed it, particularly when Oates and Joel Fabiani have a brawl, but he suggested that the biggest mystery is what the S in Department S stands for. Special? Strange?

Critics would sneer at ITC churning out action-adventure kid stuff, but this episode is kind of overt in being intended for older audiences. Apart from all the drinking and smoking, Joel Fabiani is shirtless in a couple of scenes, Rosemary Nicols tries nude tanning under a lamp, and one of Peter Wyngarde’s ladyfriends might not be wearing anything either. And yet it doesn’t make me wince like Jack of All Trades often did because it all seems so tame and innocent. Even with Nicols showing more skin here, and in “Six Days”, than any other ITC lead heroine, it never feels prurient.

I think there are one or two things about Brian Clemens’ “Hostage” that work, and our son enjoyed it more than the previous two episodes, but by and large I didn’t enjoy this one much at all. By far the best thing about it is the way it reintroduces and reemphasizes the rule that Steed always cheats. But tonight he doesn’t cheat nearly enough. This could have been a much more interesting story if, no matter how well-planned this week’s villains are, they had found themselves getting in way, way over their heads trying their scheme on their hero. It also would have been nice if Purdey, their hostage, would have used that great big length of chain they gave her to strangle one of her captors. Both Marie and I were waiting for that to happen.

So this is yet another instance where bad guys have a scheme to make Steed look like a traitor. That alone would be a bore – what are we, 180 episodes into this show, and we’re doing that again? – but it’s made more dreary by introducing a super-agent that we’ve never met before, played by Simon Oates, and expecting us to not see him as the only possible suspect. There’s also a new boss character called McKay, played by William Franklyn, who gets to introduce the big only-on-TV complication that Gambit needs to bring Steed in.

Could it have been done another way? Well, not easily, because this was actually the first episode that they filmed in the final thirteen. But just suppose that they had introduced Simon Oates’ character several episodes previously as a recurring good guy and a familiar face that we accepted as one of the heroes. And suppose that instead of a yet another brand new boss, they’d brought back somebody, anybody, that we’d seen before. Why not Patrick Newell, or even Linda Thorson, in this part? It might not have made this story great, but it would have made it less obvious.

Halfway through Tony Williamson’s “Super Secret Cypher Snatch,” the stuntmen put on one of my all-time favorite car chase scenes, albeit a criminally short one. The villains are in a window cleaning van with a long ladder and go after Steed, who’s driving an open-top 1920s Rolls Royce. The stunt team excelled themselves at several points in this story, including some terrific fights and a barely-connected-to-the-plot teaser pre-credits scene in which one fellow jumps off a motorbike to tackle another dude while a helicopter hovers over them, but that bit with the Rolls is my favorite. That’s terrific driving, speeding right on the lead car’s rear bumper while bringing a ladder down on its driver.

I’ve always liked this episode, in part because the guest cast is, as always, just so terrific. Recognizable faces this time: Allan Cuthbertson, Ivor Dean, Donald Gee, Simon Oates, and Nicholas Smith. Although Ivor Dean kind of lets everybody down by forgetting to hold his breath when he’s supposed to be playing a corpse. But it’s also just a fine story, structured well enough to give the audience plenty of clues how the villains are breaking into a top-security establishment while we wait for the heroes to figure it out.

Also this time: it’s the return of Patrick Newell as Mother, who we met in “The Forget-Me-Knot.” I think here’s one point where The Avengers starts to fumble. Steed and his associate do not need a boss. Back in the videotape days, Steed occasionally reported to a character called One-Ten, played by Douglas Muir. Another boss figure, Charles, appeared twice in season three. Steed reports to a colonel by telephone once in season four, and there was Major B, head of “the floral network,” in “Who’s Who???” For the most part, these characters only appeared when there was one of those very rare plots that dealt specifically with Steed’s organization. That’s the case when we first met Mother.

Unfortunately, we can blame the American network for Mother becoming a semi-regular. He appears in 19 of the last 26 episodes. Some muckity-mucks at ABC apparently decided that they really liked the character in “The Forget-Me-Knot” and asked the producers to keep him around as a semi-regular. Since ABC had, against expectations, renewed the series for a full run, I guess that humoring them and hiring Newell was the least the producers could do!

About those expectations… I’m a little overdue in talking about this here, but the renewal of this show really was unexpected. Next time, I’ll talk about the nearly unique set of circumstances that led to these 26 episodes being made at all… and why everybody kind of knew up front that they’d be the last episodes they’d make for quite some time.

Not a great deal to blog about this afternoon. Like I hinted at last time, Philip Levene’s “You Have Just Been Murdered” is a fairly down-to-earth story about a gang of blackmailers. It’s done with style and wit and very good performances, and would probably have been equally entertaining had any other sixties adventure show tackled it. Perhaps the most extraordinary thing in the story is Simon Oates’ remarkably peroxide hair.

Overnight, I had a lengthy bout of insomnia, got impatient and rewatched a favorite, forthcoming adventure again. I hadn’t realized before that the team came back to this location about nine months later to shoot the Tara King “fields of armor” title sequence, and Linda Thorson runs across the same bridge where Diana Rigg, hiding in the water underneath it, emerged to beat up a couple of thugs in this story. I double-checked at Avengerland, where so many British TV filming locations are documented, and the area around the bridge was used in at least nineteen other Avengers stories, plus more than a dozen other films and TV series. Well, when you build a film studio just down the road from such a nice and attractive bridge, you expect that everybody will take advantage of it, don’t you?