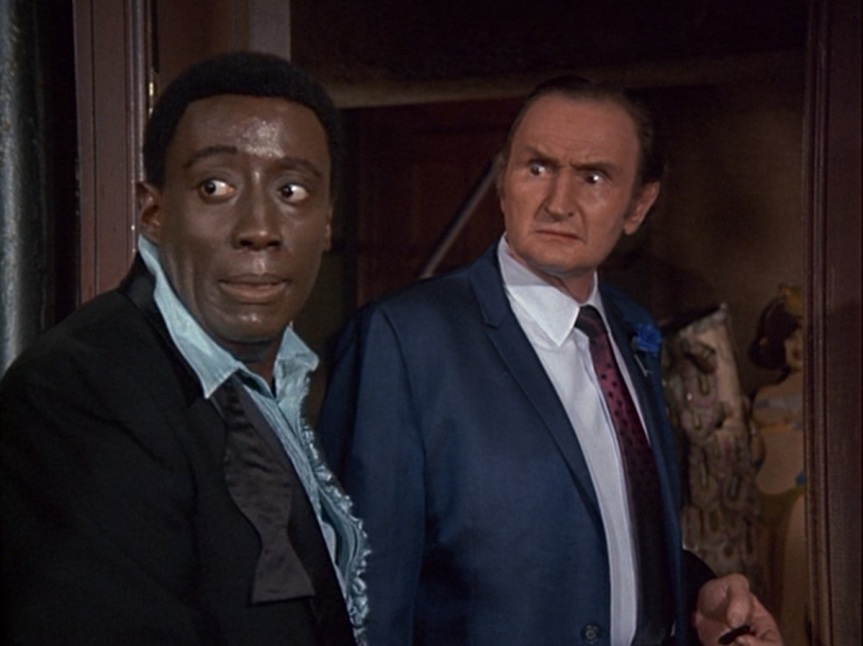 The last time that we looked at a Night Gallery story, I noted that “Certain Shadows on the Wall” had a final-shot revelation worthy of a DC horror book. “Clean Kills and Other Trophies” has a similar, inevitable, grisly, and morbidly comic final revelation. It’s also the only thing about this installment that brought a smile. It stars Raymond Massey as a brutal and fanatic big game hunter who insists that his liberal good-for-nothing son shoot and kill a deer in order to inherit his estate.

The problem, in that Rod Serling way, is that Serling really enjoyed giving the evil man all the good lines. In fact, he gave him practically all the lines. It’s an endless harangue, enlivened by insults like “jellied consommé,” which nobody outside of a Rod Serling script ever employs. Enough becomes enough after three minutes of this. The characters are drawn, now give us more of a plot instead of underlining and re-underlining just how obnoxious the dad is, already.

Definitely had to have a talk with the kid after this one. It’s once again Serling who gives us a horrible breakdown in family, and the father in this was so overbearing that I felt compelled to assure him that while we’re certain to have rows and arguments when he becomes a teenager and gets sick of school, we were never going to talk to him that way, or demand he kill a deer to get whatever meager inheritance might come his way. Yeesh.

Well, I might end up calling him a “jellied consommé.” It’s so stupid it might could defuse a bad moment.

“Make Me Laugh,” which was the second and last Gallery that Steven Spielberg directed, wasn’t very much better, but it did have a really interesting scene that I enjoyed a lot. Godfrey Cambridge plays a standup whose career is on the rocks, and he’s just bombed in a lousy club with his remarkably lousy material. He’s commiserating with his agent, played by Tom Bosley – who was in Spielberg’s other Gallery – when the club manager, played by Al Lewis, cuts him loose from his engagement since the act was so bad.

I thought this was really riveting because it’s not played lightly and it’s not dismissed. By the nature of their profession, Cambridge, Bosley, and Lewis had all really been in crappy situations like that. They’d all been rejected, they’d all been passed over, they’d all been told they weren’t good enough. They were actors, that’s part of what they had to go through constantly for every role they did land. The story wasn’t anything we haven’t seen from Serling before – careful what you wish for! – but that scene hurt because those three actors had lived it and took it straight to the audience’s chest. Heck, I saw that comedian’s lousy act and I still wanted to give the poor guy a hug.