There is an obvious topic to discuss with this pair of episodes, but I don’t want to be obvious. I’ll talk about it next week.

Instead, I’ll note that, since we haven’t watched Flash Gordon yet – but we will – this was our son’s first opportunity to enjoy the splendor that is BRIAN BLESSED hollering at top volume. Between the tentpoles of Sil sniveling and King Yrcanos bellowing, I don’t like anything about this story, but our son enjoyed BLESSED tremendously. He’s a loud kid. Mostly polite and loving, but he sure does forget to use his indoor voice a lot. Now here’s the loudest person he’s ever seen, and nobody’s telling him to stop shouting. He laughed all the way through this, so the weird and unpleasant ending didn’t have the effect that I think the producers wanted with him. Of course, I have been hinting that what we’re seeing isn’t necessarily the truth.

Naturally, I showed him BRIAN BLESSED doing snooker commentary a few minutes later. I’d watch all sorts of dumb sports on television if BLESSED was doing the play-by-play. Bowling, Texas Hold-em, darts, soccer, you name it. 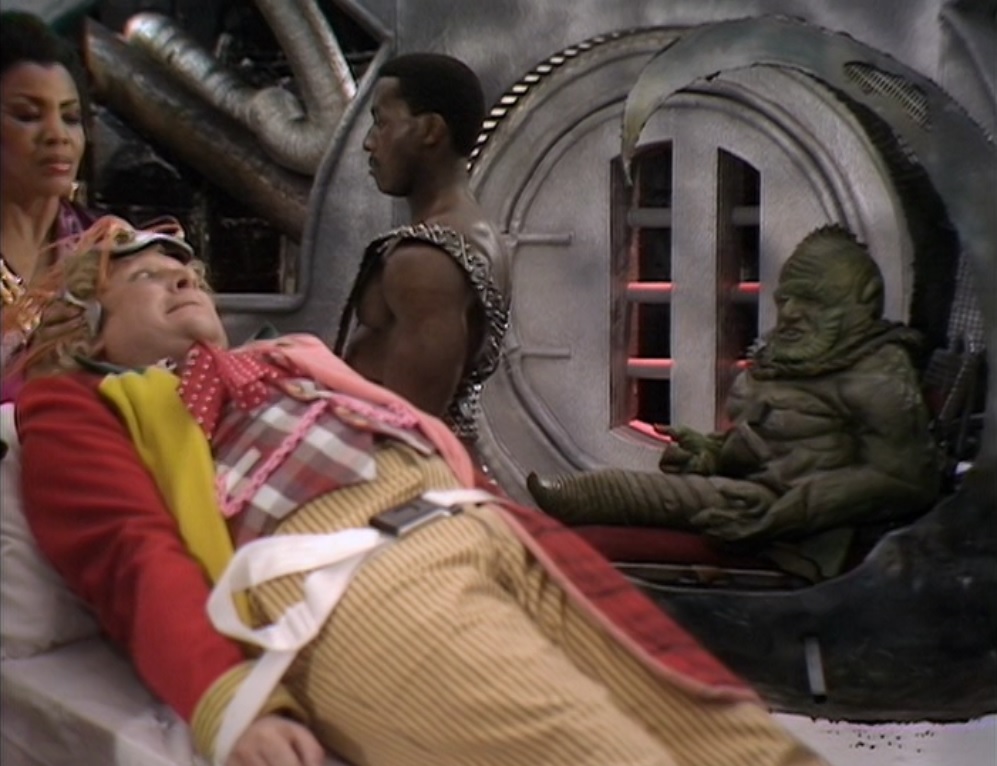 Well, I said before that Nabil Shaban’s wonderfully disgusting character Sil was the best thing about this story, just like he was in his first story, and I stand by that. But it is worth noting that BRIAN BLESSED is here to yell and bellow and bring the house down as a warrior king, and Christopher Ryan, the second Young Ones star to appear in this show in a two-year period, plays another slimy member of Sil’s species. The story’s a mess, but I like these two. And our son was, momentarily, really impressed by the very ’80s planet that the visual effects team dreamed up, with a dayglo-blue shore and crashing neon pink waves.

Episodes six through eight are the first example of Doctor Who using the format of an unreliable narrator. The Doctor has amnesia after getting his brain blasted in the cliffhanger to part five, allowing the evil Valeyard to screw with the “evidence” of the story and make him look like a coward who’s switched sides to save his own skin. So we never actually get to see what really happened on the planet Thoros Beta… probably. Unfortunately, Eric Saward, the script editor, didn’t make any of this at all clear and was in the process of finding himself a new career. He gave a breathtaking bridge-burner of an “exit interview” to the magazine Starburst, telling his side of a show in turmoil and airing all the dirty laundry he could find, making enemies of everybody at every level of the show’s production. The sad result is that this segment didn’t get the attention it needed before they taped it, so everything is confusing and honestly annoying to follow.

I paused between episodes to explain how we’ve already seen how the Valeyard can edit the material, and that we can’t trust anything that happens onscreen. I did this because I knew our son would absolutely hate seeing the Doctor turn evil and treat Peri so horribly. He did, scowling all the way through part six. Unfortunately, this is going to get worse before it gets better.

I really wish Sil had come back for a rematch against Sylvester McCoy’s Doctor. I’d have liked to see him in a story that I enjoyed just once.

Anyway, I say that Sil is by miles the best thing about “Varos,” but there is one very good scene where Martin Jarvis’s character tries to reason with a guard into doing the right thing. Other than Nabil Shaban being so very entertaining with his gargling and hollering as Sil, Jarvis’s performance in that scene is honestly the only thing about this episode I liked at all.

In 1976 and 1978, the BBC presented two runs of what sounds like an incredibly strange drama called Gangsters, which began as a hard-hitting look at crime and racism in a northern city but mutated into a surreal story about writing a television series about crime and racism in a northern city. It might have been the Velvet Underground of TV: not very many people watched it, but everybody who did went on to write for television. It starred Maurice Colbourne, who we saw as Lytton in the previous adventure, and was scripted by Philip Martin, who was invited by script editor Eric Saward to craft this odd, multi-layered, and deliberately unpleasant story. It’s about a former prison planet whose impoverished population get their kicks watching televised executions and torture.

I don’t like this story at all. I think it’s fake, unbelievable, and full of really bad performances, with two exceptions. First, they got the reliable Martin Jarvis in to play the planet’s governor, and second, they introduced Nabil Shaban as a slimy, disgusting, and absolutely wonderful slug-creature called Sil. Sil is obsessed with violence and profit, a big dreamer with a short temper. He’s hilarious and by miles the best thing about the two stories where he appears.

Our son enjoyed this quite a lot more than I was expecting. He really liked the scenes where “the folks at home” comment on the action and cast their votes for whether the governor should hold firm on the price of a mineral that Sil’s corporation desires. “I would have voted no, too,” he said, joining the 900-plus thousand who agreed. The population of Varos is only about a million and a half, it seems. Props to Martin and Saward for introducing an “interactive” element, of sorts, to the story, because that’s exactly the sort of thing to catch the attention of seven year-olds!

(A note on picture quality: This story was one of the first to be released on DVD in North America, through BBC Video’s old deal with Warner Brothers, and it looks incredibly dull and bland. I’m reliably assured that if you click the picture and order the subsequent “special edition,” what you’ll get is far more vivid and colorful than the original version, but I don’t care enough about the story to make the investment, honestly.)