So these are the Tereleptils, and I’ve always thought they were good-looking monsters. They made the interesting, and probably correct, choice, to give the one with the full animatronic mask the additional detail of being horrifically scarred and missing an eye. This unfortunately limited the aliens from ever returning to the show, because they’d have had to start from scratch and rebuild an entirely new head. Otherwise, you’d have dialogue like “You know, I met one of your species on seventeenth century Earth with wounds exactly like yours…”

Actually, they did reuse one of the non-animatronic heads for another alien that made a fleeting appearance in a story four seasons down the line. Perhaps they thought nobody would notice.

Fans and writers have thrown a lot of criticism at the producer of the show throughout the eighties, John Nathan-Turner, and as the program starts getting complacent and annoying – very soon now – I’ll have a lot to say about what I see as some very poor decisions. But let’s give him a round of applause for having that Tereleptil blow up the Doctor’s sonic screwdriver in part three of the story. Nathan-Turner believed that writers were using the device as a crutch instead of coming up with clever and inventive ways around problems. So when the screwdriver explodes, Marie told our son – who’s only seen the latest four episodes of what we call “the modern show” (and enjoyed them very much) – not to worry, that the Doctor can build another. But the beautiful thing is, he doesn’t, not for years. 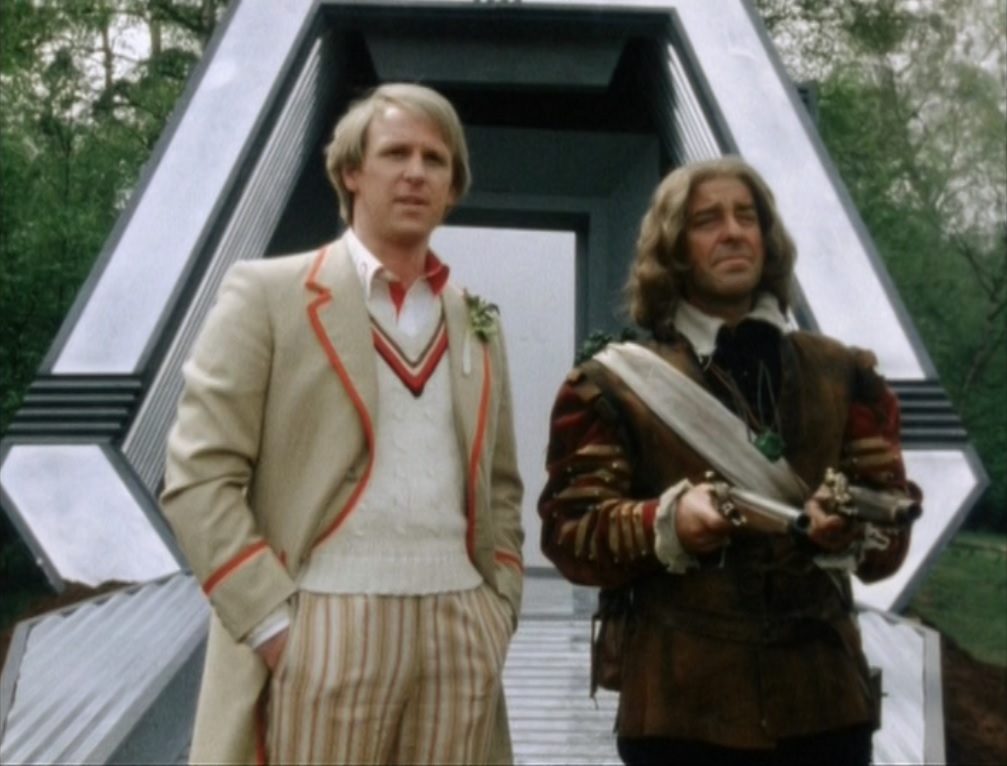 As I’ve been writing this blog, I’ve mentioned the always-evolving production crew of Doctor Who as I go, but I’ve left a small hole with season nineteen because the script editor’s job was strangely in flux that year. About half of the stories were edited by Antony Root, and the other half by Eric Saward, who would keep the job for the next four years, but since they were made way out of transmission order, I wasn’t sure where to mention it.

“The Visitation” is the first of Saward’s scripts for the program, and I think he gets the balance of the character interplay just perfect in this one. He seems to lose interest in the lead characters after this story, preferring instead to use them as foils for the guests. This story, for example, is almost every bit as much about a gravel-voiced highwayman, played by Michael Robbins, the longtime star of On the Buses, as it is about the Doctor and his friends. Later Saward stories would be much more about the guests.

I had meant to give our son a teeny history lesson before we got started tonight, but I forgot. The story will memorably end with a cute revelation about the Great Fire of London in 1666. This, I figured, would be completely lost on our son, because the second grade curriculum in the United States doesn’t actually mention it. So we talked about the rats that the mysterious and scarred alien creature has been keeping in these Plague-fearing times, and then I mentioned that the really big world event that year was the fire, which destroyed thousands of homes. He told me that he knew all about it. Apparently, it’s revealed in one of his Beano Books that not only did Beryl the Peril start the fire, but she also ate five pies while starting it. Well, did she, now!

Another couple of oddball coincidences tonight: part of the action in the second episode of Adam Adamant Lives! is set in a chamber of horrors wax museum, just like the one we saw in the episode of The Avengers we watched last night. And in the cast, there’s Michael Robbins, who we saw in an episode of The Avengers just three days ago. We’ll see Robbins again in Doctor Who in about three weeks. He’s best known for his role as Arthur in the sitcom On the Buses, a part he played for many years, but he was in practically everything.

So “Death Has a Thousand Faces” is again written by Tony Williamson, and it’s just terrific. It’s set in Blackpool, where Adam and Georgina have followed an unlikely clue that’s led them to a plot to blow up the coastal city’s entertainment district, the “Golden Mile,” in order to increase the value of some land just north of the strip.

But the plot takes a back seat to two things: first, the story has an incredibly generous amount of location filming, and it’s just fascinating to look back in time 52 years and see all this footage of the city as it was. I’ve never been to Blackpool myself, but I was just riveted by what was there. Adam and Miss Jones even pop into an amusement arcade and the camera lingers on some of the old-fashioned games, almost as though the director wanted to ensure that the couch potatoes in other countries five decades later could see what was there for tourists to enjoy.

And speaking of Blackpool, there’s a great little revelation that Adam actually formally opened the Blackpool Tower in 1894, after doing the city the service of foiling the plot of some scoundrels to blow it up. He did this by throwing the ringleader off the top of the tower. That’s called foreshadowing. Michael Robbins’ character almost immediately reveals himself – a mysterious man in an overcoat eavesdropping – as if to tell the viewer “I’m next.”

The other great thing is that this introduces Jack May as a superb character called Simms, the third member of the team for most of their forthcoming adventures. Simms had previously been “in service,” as they say, as a valet, and had also worked the boards as a stage actor, but he’s down on his luck in Blackpool and working as a Punch and Judy man. It’s impossible to dislike Simms; he’s an incredibly upbeat, optimistic, and downright fun character. When the trio first compare notes together in a restaurant, he offers Georgina a cigar, and, much to Adam’s horror, she accepts.

Our son really liked this one as well, until we reached the scene where the villains have the upper hand and have our heroes captive in the wax museum’s torture chamber. He was so enraged by the bad guys that he broke out his trusty finger pistols and started shooting at the screen again.

(Note: I can play them, but I’m not presently able to get screencaps from Region 4 DVDs, so many of these entries will just have a photo of the set to illustrate it. Click the link to purchase it from Amazon UK.) 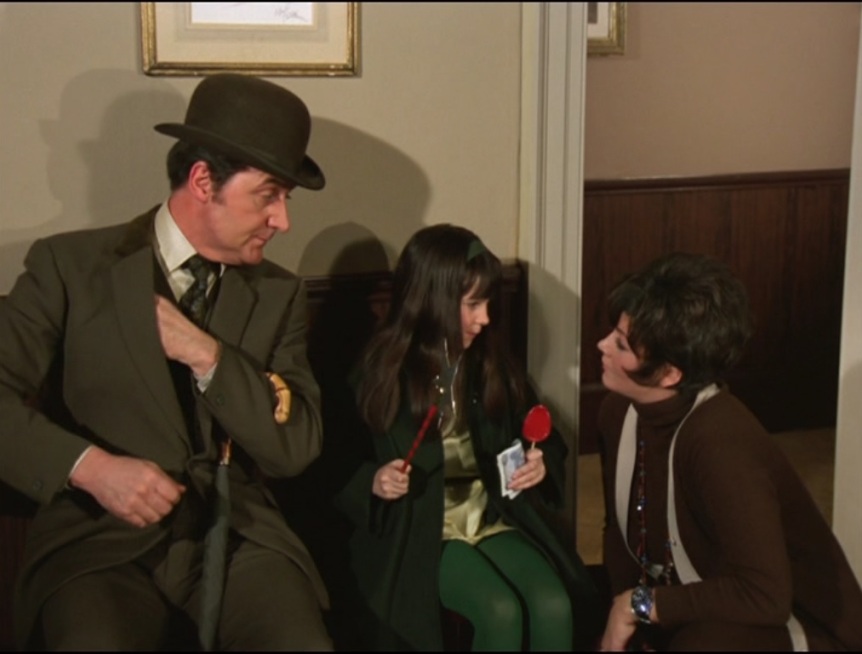 I’ve never much enjoyed Terry Nation’s “Take Me to Your Leader,” possibly because all the wit is crammed into two minutes in the middle of the story. Well, while it isn’t a favorite, it’s not too bad, and Robert Fuest got to work his magic all over London with a larger-than-usual amount of filming on city streets, but it does feel like it needs a break from the narrative, which is our heroes swiping an attache case in a chain from one endless courier after another in one long night. Well, there is a break of sorts, with Mother discussing the situation with a character who wouldn’t have been more obvious as the Secret Master Villain if he had been wearing a T-shirt.

But while our son really enjoyed the constant stream of new characters, several fights, and a specially-trained courier dog, by far the best part of the story is in the middle. It turns out that a dance teacher played by Penelope Keith is actually the minder for a conniving little courier who’s more than susceptible to taking bribes, because a little girl has her future to consider, and a £25 investment would buy an awful lot of lollipops.

She’s a great kid. She probably works out her nefarious schemes on the playground with Wednesday Addams.