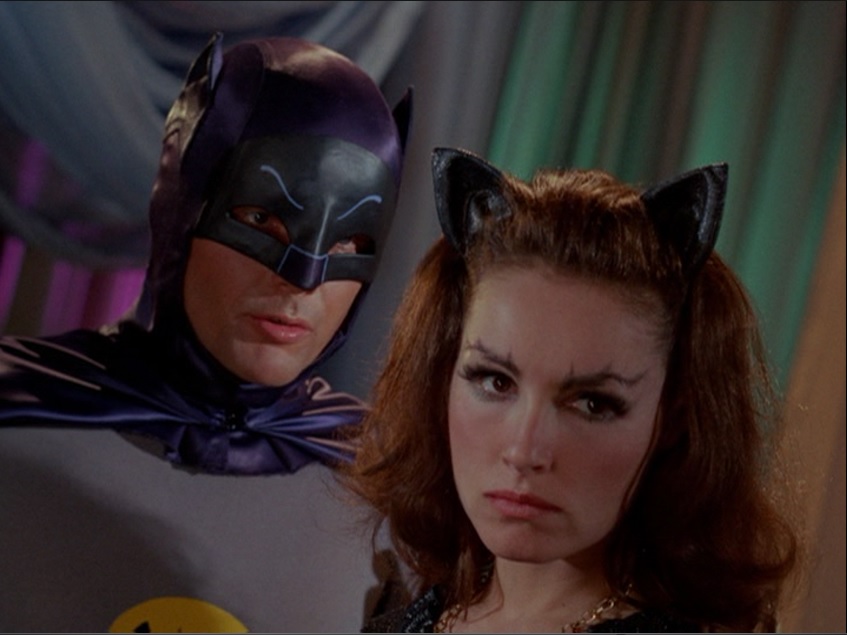 To be sure, this story is disjointed and a little odd, but we all ended up really enjoying it. I think some elements of the compromised production are still fumbles, most notably the bizarre maze in which Robin and a policewoman are trapped, and which was achieved on a budget of… well, practically nothing, and it shows. But turning J. Pauline Spaghetti from the male character that writer Ellis St. Joseph devised into an elderly widow brings things to a deliciously fun climax that couldn’t have been present in the original draft.

But before we get there, we have a second appearance from James Brolin, this time playing a rookie cop who doesn’t know who Batman is, and doesn’t really care. He’s found the Batmobile, stolen by Sandman and parked illegally, and wants to write our hero several citations. Frankly, for letting his car get pilfered for something like the eighth time in this show, he deserves a ticket or two.

It’s established early on that Catwoman and Sandman clearly intend to betray each other, but surprisingly it’s Sandman who gets the drop on Catwoman. It’s a great betrayal, too. He and his bride-to-be stop by one of her banks to cash a whopper of a cashier’s check, and he leaves Catwoman’s address with the bank’s president, asking him to phone Commissioner Gordon.

The funniest moment of the episode comes when Batman confronts Catwoman, and asks where Robin is. “…who?” she replies.

But there’s just a lovely, lovely twist yet to come, when Sandman and J. Pauline arrive at her island getaway. It’s very, very subtle, but there’s this lovely bit where J. Pauline shows her future husband these four plaques set into the wall of her noodle factory. Each of her previous four husbands has taken her last name… and each of them has met a grisly end in this factory. And look, there’s a fifth, blank plaque.

They never draw attention to it, but Michael Rennie’s eyes tell the story. In a few months, Tallulah Bankhead would appear on the show as the criminal Black Widow. She came late to the party. It’s only the silly convention that demands there be a Batfight, and that, down two henchmen, Sandman has to shed his coat and join this fray. If the man had a lick of sense, he’d have surrendered and gone away without fuss, before J. Pauline entombed him with the other four fellows!

To begin with this week, I’ve done you all a disservice by not mentioning another blogger who is writing about the ’60s Batman series. He goes by the handle “The Squonk” and he’s writing a new installment every Friday at Channel: Superhero. He’s just finished the fourteenth episode, which is Mad Hatter’s first story, so go check that out and enjoy!

Anyway, tonight’s episode is… odd. The original draft was written by Ellis St. Joseph, who is best known for writing several live productions from the late 1940s and early 1950s, back when quite a lot of TV drama came via anthology programs. Joel Eisner’s Official Batman Batbook gives this story a little more space than most, as the writer had a very high opinion of what he had submitted, and considerable disappointment at how it was rewritten by Charles Hoffman, and talked at length about it.

Briefly, St. Joseph contended that his submission was very unique and original, and owed a lot to German expressionist cinema and Dr. Caligari. Robert Morley was cast as the villainous Sandman, a rare example of a villain whom Batman has not met before, but then the reality of the grind of TV production reared up. The problem was that Julie Newmar had been contracted for several episodes, since the ratings were slumping and she was just about the only thing that could reliably prop them up a little. They had Hoffman bolt a Catwoman plot onto St. Joseph’s script, and Morley was less interested in playing the role if he was going to be Newmar’s second banana. Michael Rennie was cast in his place.

The finished product is still pretty entertaining, much better than the last couple of stories. Catwoman really doesn’t have a lot to do in part one, but Newmar still controls the screen when the two villains are together. Still, Rennie has a calm demeanor that most Batvillains don’t have, and it’s refreshing watching how he plays the part. I like the way that during the Batfight, Sandman mostly stays out of the way while his henchmen brawl, looking on with his hands in the pockets of his fur coat, waiting for a chance to gas a hero with his sleeping powder.

Daniel enjoyed it all, but the episode did come to a crashing, noisy halt with one of the stupidest moments of the whole series. They’ve asked the Batcomputer to identify any wealthy insomniacs in Gotham City, who Sandman, alias “Dr. Somnambula,” may have targeted. The computer suggests the rich J. Pauline Spaghetti, not by a name on a card, but by belching pink spaghetti out at Robin. This sort of dopey Hanna-Barbera comedy moment is probably precisely the sort of thing that St. Joseph was trying to avoid with his German expressionism storyline.