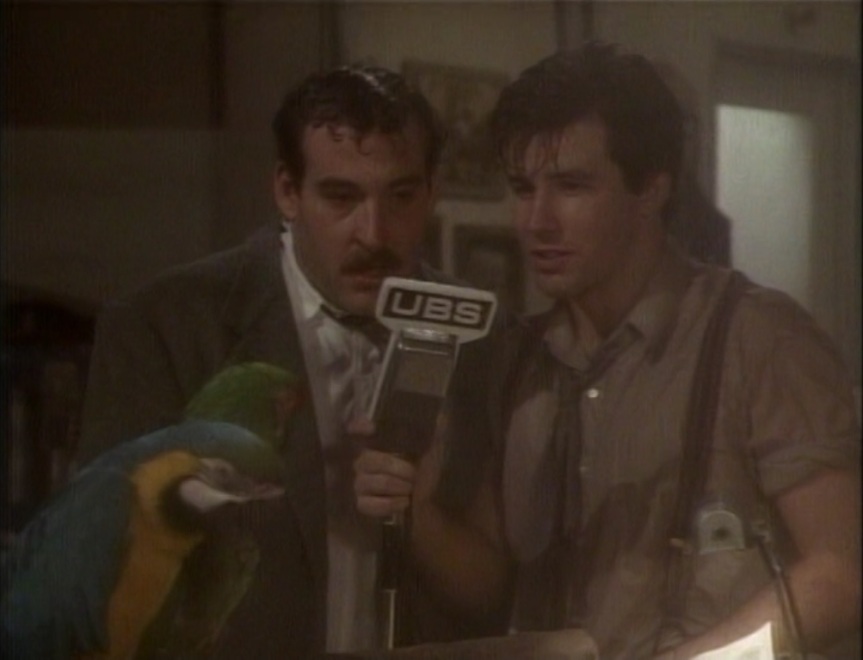 Last night, our son was fairly ambivalent about our selection from The Twilight Zone. Tonight, we finished our week-long trip to the eighties Zone with a segment that scared the devil out of him and a segment that ranks as his all-time favorite story from this series.

“Gramma” is a Harlan Ellison adaptation of a then-recent short story by Stephen King. It’s tight, cramped, claustrophobic and practically the whole half-hour is carried by a young actor called Barret Oliver who is freaking out about being trapped in his remote house alone with his huge, wheezing, asthmatic bed-ridden grandmother, who may be a beast or a witch or an Old One. Our son was petrified. He told us, bluntly, that he never, ever wants to see this again.

But then there was “Cold Reading,” which was so fun that he was disappointed that there isn’t a sequel. In this one, a live radio show called Dick Noble, African Explorer gets interrupted by a voodoo totem that makes every sound effect in the production come true, with rain, macaws, jungle drummers, and monkeys causing havoc in the studio. The impresario in charge of the show is pleased at last with the authenticity he’s long craved, but his ability to rewrite on the fly gets called up for duty before the actors can get to the pages with the earthquakes and plane crashes. This was silly enough for our son to love to pieces.

Between the two, there was a bit of self-indulgence on the part of writer Rockne S. O’Bannon, who contributed a story about a writer, also called Rockne S. O’Bannon, who is desperately looking for an original idea and tormented by a gang of creatures in monks’ robes that only he can see. Martin Balsam plays the fictional O’Bannon, and Clive Revill his agent.

That’s all from the eighties Zone for a good while, although we may step back in and look at some later episodes down the line. I thought these were a little uneven, much like the original series, but there were some good performances and good ideas, and “A Message from Charity” and “Paladin of the Lost Hour” were as great as I remembered them.

Today’s feature was a gift from Marie’s brother Karl and we really appreciate it! If you would like to support this blog, you can buy us a DVD of a movie that we’d like to watch one day. We’ll be happy to give you a shout-out and link to the site of your choice when we write about it. Here’s our wishlist!

One thing I hadn’t figured on when watching The Twilight Zone with a six year-old: sometimes Rod Serling’s purple narration is going to go straight over his head. As a case in point, here’s a tale of a fifty-something retired actress, Barbara Jean Trenton, played by the great Ida Lupino. As the episode begins, we see Trenton watching an old romantic film in which she had starred twenty-five years earlier. And Serling says:

“Picture of a woman looking at a picture. Movie great of another time, once-brilliant star in a firmament no longer a part of the sky, eclipsed by the movement of earth and time. Barbara Jean Trenton, whose world is a projection room, whose dreams are made out of celluloid. Barbara Jean Trenton, struck down by hit-and-run years and lying on the unhappy pavement, trying desperately to get the license number of fleeting fame.”

In other words, we’re in Sunset Boulevard territory, and needed to pause the episode to explain what in the world that meant to our kid.

Lupino is just terrific as the unhappy and unpleasant Trenton, with Martin Balsam suffering stoically as her agent and friend. Unlike the twist in the previous episode that we watched, this one’s sharp turn into the supernatural won’t be such a surprise to grownups, but for kids, it really is a fun one. It’s helped along by Alice Frost, as Trenton’s maid, letting out a completely fabulous scream of horror when she sees what has happened.

When the twist is revealed, our son, wide-eyed, said “That is really scary and mysterious!” Good; he’ll be all ready for Sapphire & Steel in a few years, where such a turn wouldn’t be out of place. Frankly, I wouldn’t have been at all surprised to see David McCallum show up to confiscate Trenton’s copy of the old movie. It’s that good.

In 1980, Marv Wolfman and George Perez created the superhero character of Cyborg for DC Comics. He hung around on the B-list for a couple of decades before the TV cartoon Teen Titans made him a star for the under-tens. An actor named Khary Payton has been voicing the character for fourteen years now. The current cartoon, Teen Titans Go!, is shown about twenty-three hours a day, and, given the opportunity, my son would watch it for at least twenty-two of them. Ray Fisher will be playing the character in the Justice League movie later this year. Perhaps one-quarter of one percent of this movie’s potential audience will need a quick primer about who Cyborg is, or about what a cyborg is.

But in 1973, a “cy’borg,” as it was spelled in the opening moments of the first Six Million Dollar Man adventure, was largely unknown to the TV audience, and the concept was introduced very, very gingerly by way of a breathtakingly dull opening adventure. I found a little bit here of interest. Our favorite five year-old critic found rather less. This is a slow, slow movie that plays out as a character drama more than an action-adventure thriller. It’s mainly about Steve Austin coming to terms with his new life and robot parts. Some of it’s briefly fascinating. I enjoyed a scene where he is so repelled by the sight of the arm they plan to attach to his body that he covers his face, unable to accept it.

Lee Majors is surprisingly good in some of this movie, considering that the actor has honestly never had a reputation for a lot of range. He was best known in 1973 as the meathead muscle son in the cheesy western soap The Big Valley. Wooden would be a fair adjective. But there’s a bit here where he tries to kill himself (!) and pleads with guest star Barbara Anderson to let him die which is pretty shocking and very effective in its simplicity.

Watching classic television is more than just appreciating some really good actors, like Darren McGavin and Martin Balsam, and enjoying the bad old fashions and the amusing old technology and design, like those fabulous old vendomats in the hospital canteen. You have to make allowances for what Hollywood expected would play in Peoria, as they say. But this movie plays it way too safe. By 1973, sci-fi movies had been churning out all sorts of loopy ideas in hospital operating rooms, from saving Hitler’s brain to putting a white bigot’s head on a soul brother’s body, so this isn’t all that crazy. Even the audiences of 1973 Peoria really didn’t need fifty-odd minutes of a seventy-five minute picture to get used to the idea of two robot legs, a robot arm, and a bionic eye. Actually, the word “bionic” wasn’t actually used in this movie. That must come later.

Speaking of the actors, Darren McGavin plays Spencer, the ruthless head of the OSO. He’d be replaced in the next movie by a different character played by Richard Anderson. I thought for a minute that was a shame, because McGavin is just so darn good in everything, but I guess McGavin couldn’t hunt the creatures of the night in Chicago if he was being Steve Austin’s boss. (This film was made after the two Kolchak TV movies, but before the series.) Dr. Rudy Wells is here played by Martin Balsam as an old friend of Steve Austin’s. The character would later be played by Alan Oppenheimer and then Martin E. Brooks. Balsam is, again, terrific, and I like the way that the character drama is really between Spencer and Wells about Steve Austin. His decision to accept his new life and job is a foregone conclusion; there wouldn’t be a show otherwise. Lee Majors gets to sit like a block of granite while Balsam and McGavin do the debating. 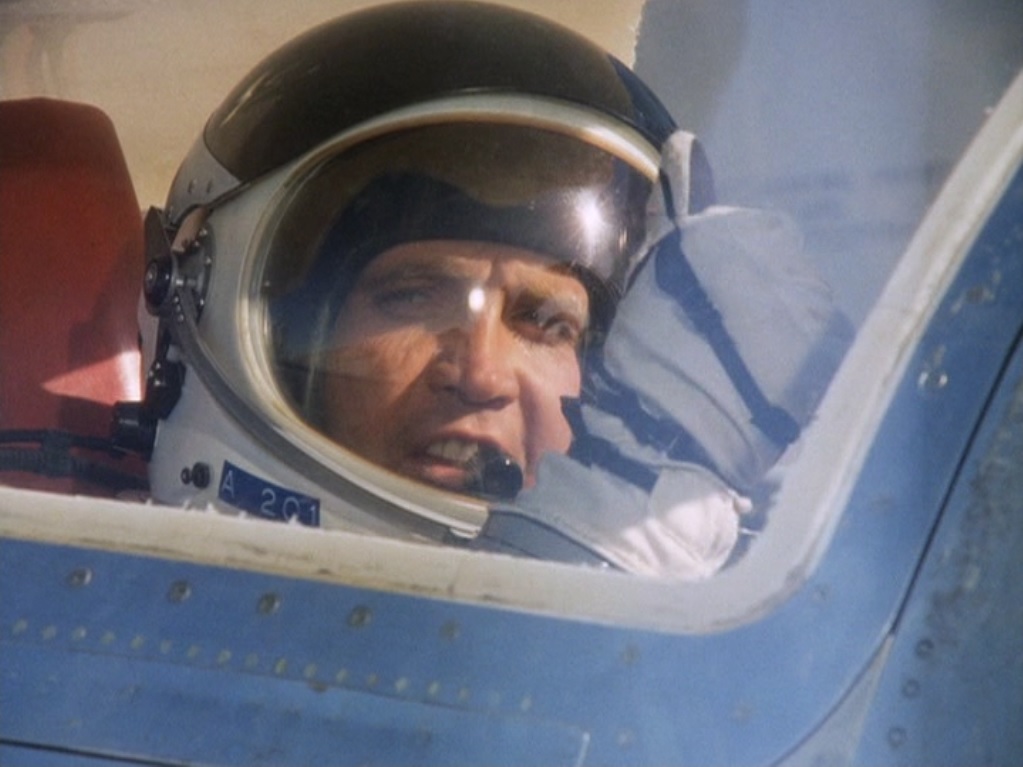 Our son was less than thrilled. The show gets better, and is occasionally pretty entertaining. We’ll be picking it up after one more of the movies, and watching a selection of the episodes – not all of them, no – throughout the rest of this year. But this was talky and slow and while the series was made with one eye on the kids, this was made for grownups, an attempt at humanizing sci-fi concepts that doesn’t really work. Our boy was restless and squirmy and I’m still not sure he understands why Steve didn’t want a bionic arm. Kids want bionic arms. Who wouldn’t want a bionic arm? At least there’s a pretty neat rescue with some small explosions and a curious free jazz soundtrack. Steve even takes two bullets in the fight, which I’m pretty sure doesn’t happen very often after this. But the desert rescue is small potatoes stuff that’s dealt with in about ten minutes; all of this is introduction to a concept that kids can easily understand.

In fact, it occurred to me that when I was in elementary school, I didn’t need an introduction movie. All of us kids got the idea pretty easily even then. Man barely alive, rebuilt, fights Bigfoot, we got this. Mainly it was counterfeiters in turtlenecks and Steve going undercover because there’s labor unrest on Pier 14 or such, which is why we’re certainly not going to watch all of this show, but I never saw the pilot movie as a kid and I understood the series. Perhaps we should have skipped this in favor of something a little bit more outlandish.