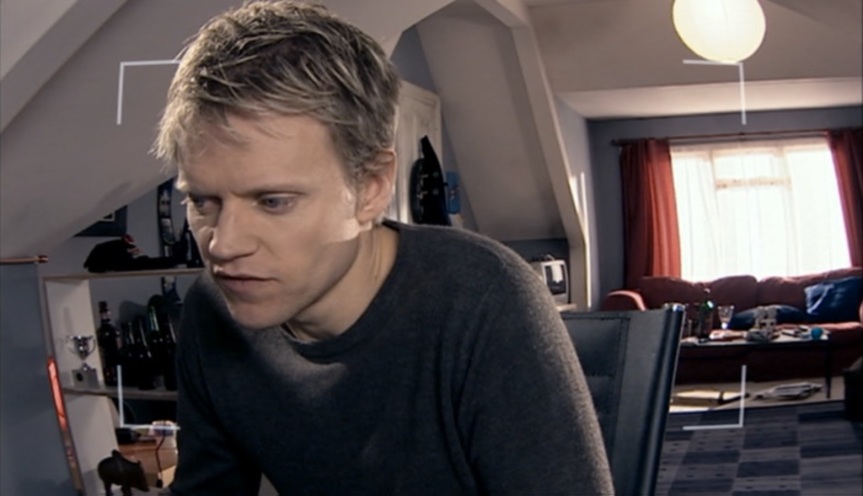 “Love & Monsters” is an episode that I saw a lot of people spitting bricks about when it was first shown. There were people who absolutely hated this one. Surprisingly, to me, anyway, our son didn’t care for it, either. He did enjoy the Scooby Doo tribute with the corridor scene at the beginning of the show, and he liked the flashbacks to the three previous alien incidents in contemporary England (seen in “Rose,” “Aliens of London,” and “The Christmas Invasion“), but the scene where Jackie Tyler comes on to Elton had him cringing in embarrassment. At the end, he said that he didn’t like it because the Doctor was hardly in it, which I can understand, and because all of Elton’s video diaries have these little white “frames” around the picture, which I said was a bit silly.

We talked beforehand about how today’s episode might be an example of an unreliable narrator. I gave him a few examples of how most television and film is made without a narrator, with the events presented as true. He offered up Kolchak: The Night Stalker as having a narrator, and I said that we can probably trust Carl, because he’s determined to get the truth out at whatever the cost. I’m not certain we can completely trust Elton’s account of these events. The Scooby Doo hallway bit at the beginning is evidence that Elton might be making some of these things up. I read an interesting theory that Victor Kennedy and the Absorbaloff never existed at all, but Elton’s relationship with Ursula didn’t work out and he told this story to make the breakup hurt less, because she got the friends and LINDA continued without him. (Why else, in “Time Crash,” would the Fifth Doctor even know about “that LINDA lot” if they were only around for about three months in 2006?)

There’s one part of me that pretends to think that the fade to black right after the shot pictured above, after Elton’s last memory of his mother, is where the truth actually ends. The continuation, with the Doctor calling to him to fetch a spade and the revelation that Ursula is still alive as a pavement slab, is not true. That revelation had a lot of fans completely furious in 2006, that Doctor Who had a cheap joke that implied oral sex with a chunk of granite.

As for me, I’ve always liked the story despite the dopey and tasteless ending. I wish that it had gone differently: it would have been a million times better if the Absorbaloff melted and freed all four of its victims. I’m not saying that Doctor Who needed to keep revisiting these five funny little humans, but I liked them, and I like to believe that they spent the second half of the 2000s watching the skies. Now that I think about it, I like that fan theory more and more, whether or not Elton was part of the gang. I also like a tremendously neat thing that I read at Wikipedia when going over the production of this story. One of the earlier script drafts had explained that Elton’s mother, who died in the 1970s, was not a victim of some kind of elemental shade that this Doctor had recently tracked, but was instead a victim of the plastic flowers that the Master distributed way back in “Terror of the Autons.” I really wish they’d have done that.

“Love & Monsters” lends itself to so much more analysis and discussion than I typically indulge here at our blog. There’s the whole business about LINDA being a parable for fandom that has to deal with superfans storming in and making everything not fun for everybody, and you can certainly read a lot about that elsewhere, if you’re inclined. I think it’s a fine piece of television with a terrific lead performance by Marc Warren as Elton, with some fine support by Shirley Henderson as Ursula. Maybe it’s not for everybody, and LINDA’s love and happiness and exuberant performances of ELO songs shouldn’t have been interrupted by either Kennedy or death, but I think it’s still charming and huggable. Plus, the way that the villain explains that Raxacoricofallapatorius has a twin planet called Clom is the funniest thing ever.

The first half of the Attack of the Hawkmen story was pretty entertaining, but the second half is great fun! It starts a little slow, and I was a little worried about our son’s attention span, but he was extremely pleased.

Indy’s second mission as “Captain Defense” for French intelligence is to get an offer in the hands of the Dutch aircraft designer Anthony Fokker, who is working for the Germans, and await a reply. But he misses Fokker in Hanover and must follow him to an aircraft manufacturing plant outside Ahlhorn. Fokker is accompanied by General Von Kramer – Jon Pertwee! – and so Indy has to sneak around and pose as Fokker’s valet to get the letter to him. But Indy can’t leave just yet. The Swiss designer Villehad Forssman is also at Ahlhorn with his prototype of a gigantic airplane, which Indy feels he needs to photograph. Then a familiar face turns up, somebody who could recognize him: Manfred von Richtofen!

How could you not love this? It’s terrific fun, watching Indy think on his feet, improvise, and take on new identities. He’s forthright and bumbling at the same time, and as events spiral out of control – you don’t introduce a huge room where hydrogen is being extracted from water and where cigars are banned without planning to blow it up real good – our son was in heaven. This ends with a terrific fight, lots of fire, and, of course, some wonderful explosions. Fortunately, when Indy secreted away his means of escape, we saw him check to make sure he picked one with a full tank of gas.

This was Jon Pertwee’s last television performance, incidentally. I think it was made in the summer of 1995, and first shown on American TV in October. He passed away in May of 1996. Pertwee was actually the second Doctor to appear in Young Indy. Colin Baker appears in one of the earlier-produced episodes (1992-93, I think) that was never shown in the US. It’s set seven months after the events of this hour, and we’ll get to it in about three weeks.

We rejoin Young Indiana Jones in the first half of the Attack of the Hawkmen TV movie. This was one of the four films made for the old Family Channel in 1995 and it’s really fun. Our son enjoyed all the World War One flying ace stuff. I was very impressed with the production. If you squint hard, you can tell where they cut in some CGI material, but they also wrecked a couple of prop planes in fields. I’d like to think that the stunt pilots enjoyed the challenge!

In the episode, Indy and Remy have returned to Belgium after their months in Africa and have been reassigned to intelligence work. But Belgian intelligence is hopelessly, laughably, behind the French and the British, so Indy forges a transfer for the two of them to Paris. Remy gets a sweet job working with the resistance in Brussels, but Indy gets sent to work as an aerial reconnaissance photographer, and, on his first day out, his pilot gets shot down by “Baron” Manfred von Richthofen, who invites the young American back to his aerodrome for lunch.

We enjoyed the heck out of this one. The script for both hours within Hawkmen is credited to Matthew Jacobs, Rosemary Anne Sisson, and director Ben Burtt, but I’m not sure whether Jacobs wrote the first hour and Sisson the second, or if it was a true collaboration. Marc Warren, who would later play the amazingly creepy Man with Thistledown Hair – one of television’s greatest villains – in Jonathan Strange & Mr. Norrell, is the Red Baron, and while he doesn’t get a lot of screen time or opportunity to dominate things, he does get some pretty choice moments, especially when he makes eye contact with Indy in the air to let him know what he thinks of a photograph that had been taken a few days previously.

I mean, really, how could you not love an hour of TV where it’s revealed that Indiana Jones came up with the idea for Manfred von Richthofen painting his airplanes red?