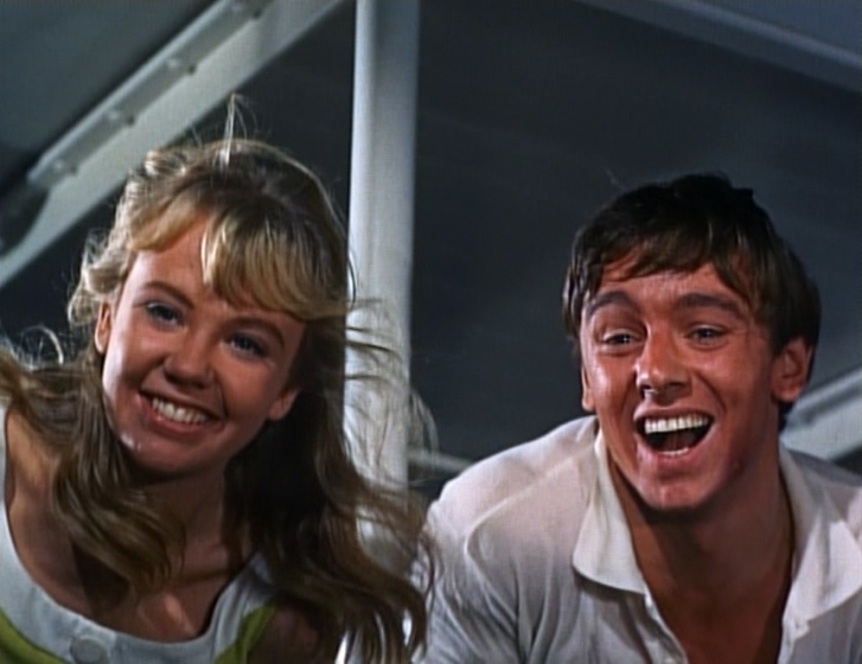 I have to admit that every once in a while, I pick a complete flop with our son. He didn’t like Disney’s The Moon-Spinners at all. I thought it was a perfectly fine adventure film for kids, especially American kids in that early sixties sweet spot right before the Beatles exploded into pop culture.

I’ve often felt that Hayley Mills was absolutely in the right place at the right time. She had a legion of young girl fans and she was perfectly cast, often by Disney, as the engaging lead in fun movies like The Parent Trap and In Search of the Castaways, and of course she usually had dreamy boys with English accents around. You know how many of those girls who showed up to scream at the Beatles when they arrived in New York were Hayley Mills devotees? All of them. 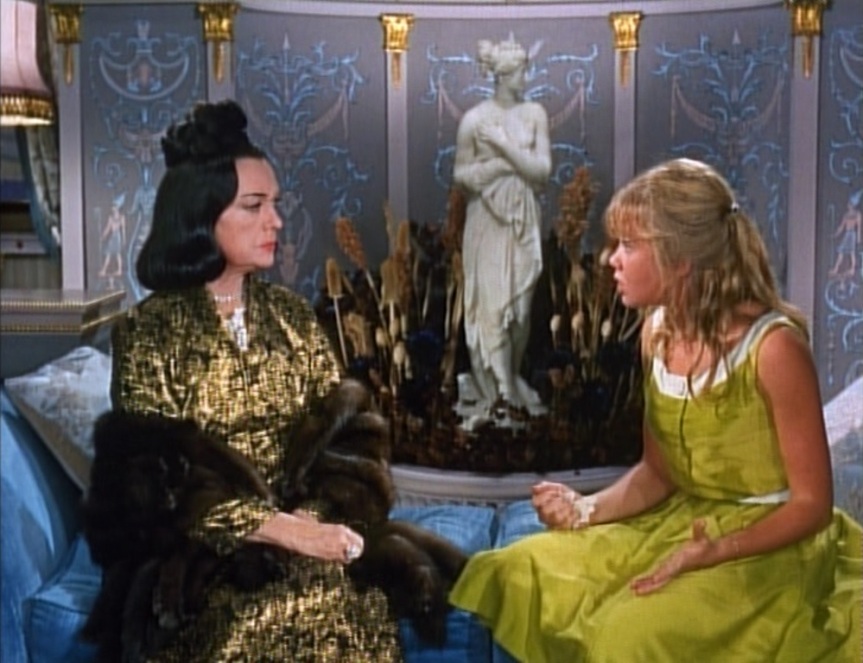 But I guess that fifty-four years later, there’s not quite as much in a movie like this to thrill a six year-old boy. It sounded promising enough. There’s danger, intrigue, stolen jewels, and Eli Wallach and Paul Stassino as dangerous criminals. Plus there’s a terrific set of stunts when Hayley gets locked in a windmill by the baddies and everybody climbs out down the sails and blades. Honestly though, the part he liked the best was when Wallach got chased out of some ruins by feral cats.

For slightly older viewers, the story concerns Mills’ character, Nicky, and her aunt, played by Joan Greenwood, visiting a small village in Crete at the same time that a young man arrives in the hopes of finding some emeralds, stolen while under his care in London some months previously. So the young people get to have an adventure while an impressive cast of character actors, including Sheila Hancock, John Le Mesurier, Andre Morell, and George Pastell, provide support.

The lack of any of Disney’s trademark comic slapstick was perhaps one small failure in our son’s eyes, but this is a much more straightforward adventure movie than their seventies output, without a lot of levity. There is one deliciously funny moment where Mills breathlessly recounts her escapades to a millionaire played by Pola Negri, who definitely needs a drink before the recap is finished, but that’s more for the grown-ups in the crowd. I think somebody our son’s age would probably read that scene as played straight, because yes, that’s an accurate recap of the story so far. And viewers his age probably wouldn’t see the small hints to the audience in the way adult characters play certain scenes. We instantly knew that John Le Mesurier’s character wasn’t being completely honest in his explanations, but the reality of what he’s actually up to still eluded our son. And Sheila Hancock brings surprising tension to a scene in which her character gets drunk and talks too much, but all of these adult conversations just seemed like noise to him because it’s more subtle than the Hulk knocking over buildings.

So perhaps six was a little young or perhaps the movie is just a dated piece that’s going to appeal more to older viewers anyway, especially the older viewers who enjoy seeing all these great actors. Maybe we should have waited a couple of years, but I’m certainly glad of the experience and enjoyed the movie very much.

One of my friends suggested on Facebook that we be sure to show our son some Ray Harryhausen films. Already planned and shelved and waiting to thrill him! We’ve got a couple more coming before the end of this year, but the first Harryhausen picture for our family was one that didn’t have too many wild beasts from mythology or prehistory. Mysterious Island was made by Columbia in 1961. Unofficially, it’s a sequel to Disney’s 20,000 Leagues Under the Sea, but we didn’t tell our son that when we got started.

The story is set across several months in 1865, beginning when three captured Union soldiers and a war correspondent escape from a prison in Richmond with a Confederate sergeant as their prisoner. They steal an observation balloon during a mammoth storm and are blown way, way off course. More than a week later, they crash on the other side of the planet. Moving that far, that fast may be the most fanciful thing in this film.

Our stranded heroes rescue two women from a shipwreck and begin the long and arduous process of building a boat to sail more than a thousand miles from this small volcanic island to New Zealand. Along the way, they battle some giant creatures, including a gargantuan crab, a bizarre bird-thing, and a small nest of very big honeybees. So what’s behind all these freaks of nature? It’s none other than Captain Nemo, who did not go down with the Nautilus in 1857 as the world believed. Instead, he steered his damaged submarine to this remote place to continue his scientific experiments in peace.

Earlier this month, I briefly mentioned an episode of Ultraman where scientists were growing mammoth vegetables, and how this trope still hasn’t happened in the real world yet. But it turns out that this idea – growing great big plants and animals to feed the world’s hungry – was one of Jules Verne’s, and a lot older than I suspected. That’s what Nemo’s up to here, and why he secretly assists the survivors from afar. With the Nautilus too damaged to travel, he seizes an opportunity to take some of his experiments back to civilization. Pirates attack the island – my, that happens a lot in the movies we watch – and Nemo sinks their ship and kills them. If they all work together, they can patch the ship and raise it under his instruction, but time is running out. That volcano will erupt soon. 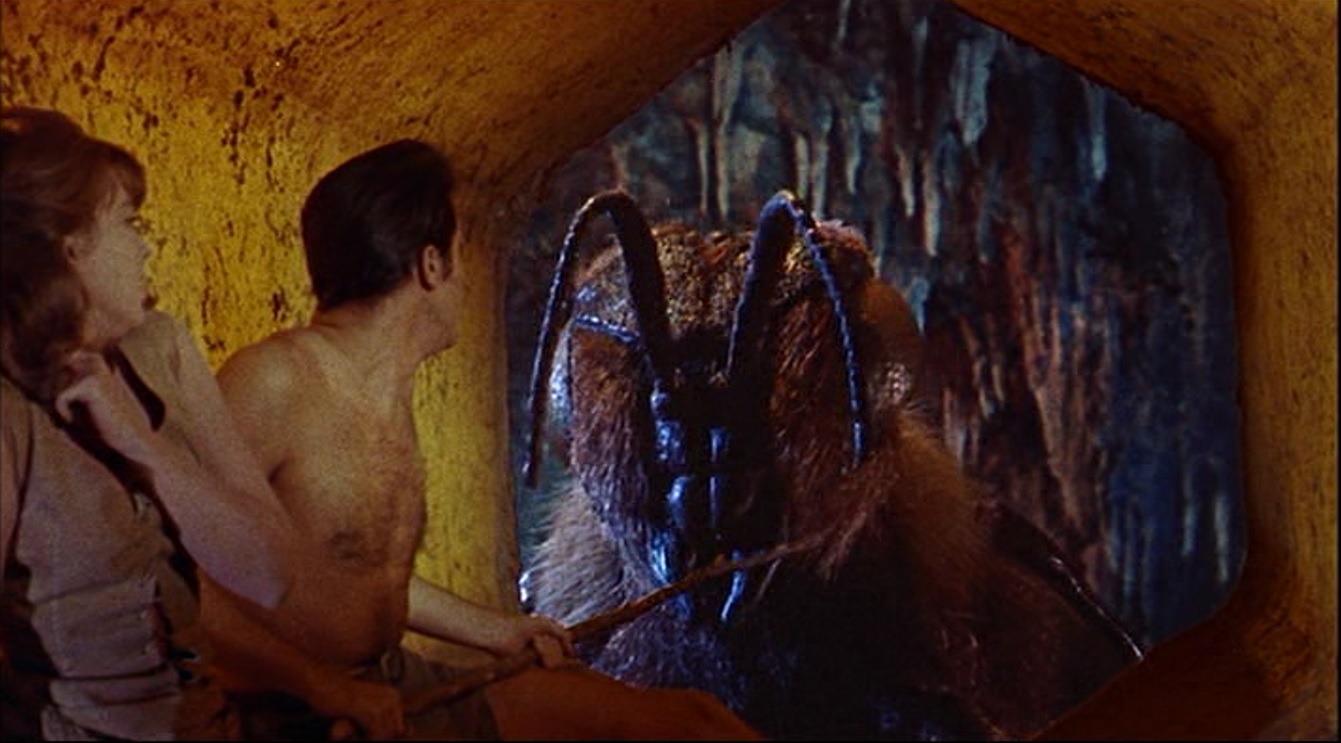 The film’s a good one, if not great. I think it’s one monster shy of where it needs to be, with a little feeling of drag about fifty minutes into the action. Michael Craig is fairly awesome as the Union captain, with great support from Michael Callan, Gary Merrill, Joan Greenwood, and Beth Rogen. The stop-motion special effects are completely amazing, even if some of the processing to blend the live actors in with the creatures is fairly obvious thanks to some poor color-matching. The last, not-very-surprising, monster to appear is the most effective of all, with a great jump-out-of-your-seat moment when it opens an eye.

Columbia had an interesting problem in casting Nemo and designing the Nautilus. Disney and James Mason had completely defined the appearance of the character. He and the story were in the public domain, but Disney’s design was not. So the submarine looks ever-so-slightly different, and Herbert Lom isn’t quite James Mason, but he’s very close. He’s cold and distant, but not cruel like we could see Mason’s Nemo.

We’ve had some really odd opinions about movies and shows from the mouth of our favorite five year-old critic, but he really took the cake this time. He told us that he really liked the film and that it was awesome, but his favorite part – very frequently either the climax or the gag right before the end credits – was the “war part” at the beginning when they escape from the prison. “So your favorite scene in a movie called Mysterious Island is a scene before they actually get to the island?” Besides, he hid under a blanket when the giant crab showed up, so I know he liked that.

Nemo is killed – for real, this time, we think – when the volcano erupts, spectacularly, and the others set sail to carry on his mission of using the power of science to destroy the motives for war. But you know that you can’t keep a good antihero down, right? I’m pretty sure that we’ll see him again one of these days…