Typically, I’m probably going to like a Doctor Who that’s both angry and intelligent. “Oxygen” is another truly excellent script by Jamie Mathieson. It’s his fourth for the show, and sadly the last, but every one’s a winner. If they gave the program to him tomorrow*, I’d punch the air, knowing it’s in safe hands. And it’s furious, angrier at the establishment than Who often is. This is like “Happiness Patrol”-level furious with capitalism.

If “Sleep No More” hinted at an ugly future where management needs to exploit labor to inhuman levels, this takes it a step further and gives us a corporation run by an algorithm which has decided labor, at least in its human form, is entirely expendable. It’s not worth the expense of replacing them with robots when the AI-controlled smartsuits which are already on-base can just kill the humans inside them and resume their work. It even gives us a nasty version of company scrip: the miners have to purchase the air that they need to breathe.

Interestingly, we had a nice, long chat with our son last night about lots of things, but circled back to how science fiction can speculate about the ills of the present. It’s part of reminding him that there’s more to the genre than laser guns and space stations and corpse-filled suits and trying to get Nardole out of the way by sending him from Bristol to Birmingham for a packet of potato chips. He really enjoyed the episode, and I hope he comes back to it and considers it in the future. It’s why something has to go terribly wrong for me to consider using a self-checkout at the grocery store. Those should go to paying jobs for people who need them, but I suppose some algorithm says otherwise.

*I say that, but I also kind of hope they give it to somebody who has never worked on the series and is not a fan, to see what a really fresh pair of eyes can see and do.

I amuse myself by noting when the Doctor expresses familiarity with our culture. He mentions ZZ Top in this one. I can accept that. This Doctor plays guitar, and Billy Gibbons is one hell of an excellent blues guitarist. It makes sense the Doctor would know his work. But Clara also mentions adding the Benny Hill theme, “Yakety Sax,” to some recorded footage of some alien invaders getting routed by a big puppet, and the Doctor seems to know what she’s talking about. Oh, if we must. It’s a good gag. Our son has no idea who Benny Hill was, and he laughed like a hyena.

Anyway, “The Girl Who Died” was co-written by Jamie Mathieson and Steven Moffat and it’s really, really entertaining. It introduces Maisie Williams as Ashildr, who of course we’re going to run across several more times. The Doctor saves a Viking village after their warriors have been murdered by some alien thugs called the Mire, and gets the remaining farmers and fishermen to defend the small town after Ashildr sparks further fighting. It’s a great introduction to the character, and there are a couple of surprising flashback clips to the episodes “Deep Breath” and “The Fires of Pompeii”. The kid was really pleased as well. He always seems to like it a lot when the Doctor’s last-minute plan is revealed. This one involves ring toss and electric eels.

So last time I was saying how much I enjoyed Jamie Mathieson’s “Mummy on the Orient Express”, and knock me over with a feather, but “Flatline” is even better. It’s completely full of wild and weird ideas, and it pitches these idea so perfectly at the younger members of the audience. The kid was absolutely howling at the Doctor’s strange predicament – beings from a two-dimensional universe, exploring ours, have sucked away the exterior dimensions of the TARDIS – and the scene is done so well that it’s almost like the director and editor knew the precise second for the Doctor to yell about this not being funny to shush the viewers. 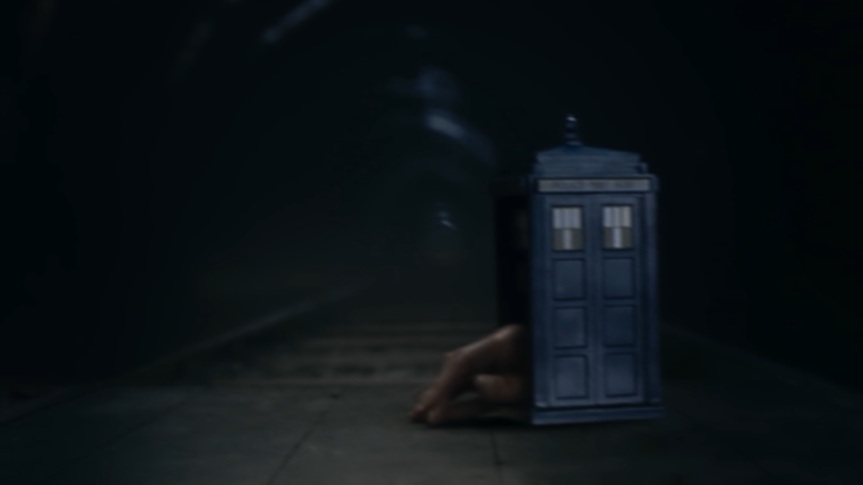 Later, of course, the Doctor does his impression of Thing from The Addams Family and the kid was in stitches again.

It’s such a splendid story, and executed incredibly well, with the 2-D monsters being completely horrific and alien. Much of it is set in the tunnels of a railway beneath Bristol, making a nice callback to another Doctor’s similar trip to London’s Underground. This episode introduces Joivan Wade as Rigsy. He returns in season nine, and he’s only in two episodes, but they’re both huge favorites. I could watch this episode night after night. The show hasn’t been this consistently terrific since series five.

And hey! The next episode is written by Frank Cottrell Boyce! He wrote 24 Hour Party People! I love that movie! I bet his Doctor Who story is going to be fabulous! 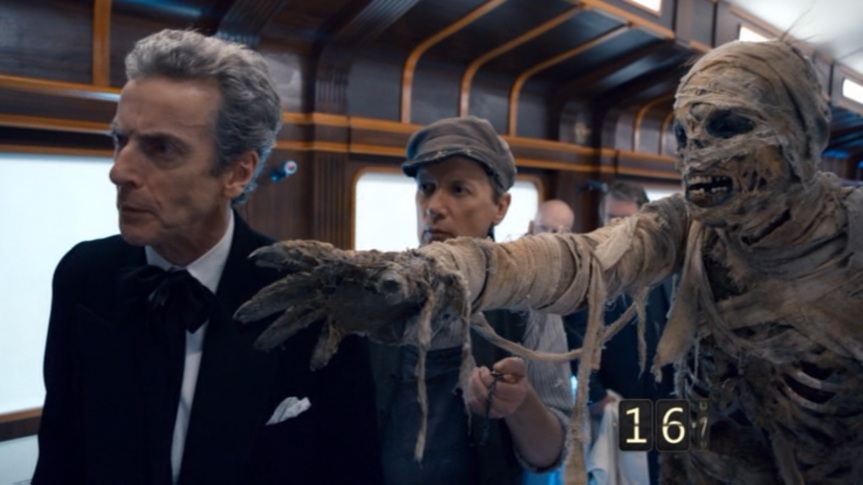 So here’s the first of four Peter Capaldi episodes written or co-written by Jamie Mathieson, and every one is darn near flawless in my book. Why he’s not writing most of the program right now I couldn’t tell you. “Mummy on the Orient Express” is completely wonderful, sinister and creepy and weird and frightening and with a fantastic mystery about a monster that only its victims can see, for the final sixty-six seconds of their lives. I love this one to pieces and have enjoyed revisiting it several times.

But I’m also disappointed that the real villain of the piece has never resurfaced. One of modern Who‘s flaws is that if there is a recurring villain, it’s probably the Master again in a new disguise or body. But the Doctor’s involvement in this story was orchestrated by a computer – possibly? – called Gus, who has been trying to get the Doctor on board its space train – a visual we’ve seen before in other media – for quite some time. The Doctor reminds the audience that he’d been invited to this train once before, back in season five’s “The Big Bang”, and that Gus has the TARDIS’s phone number. So you’re telling me that Gus only wanted the Doctor here to solve this one mystery for him and now he’s done? I don’t believe it for a minute. Gus has got to be out there somewhere ready to use our hero again for something. I sure hope so.