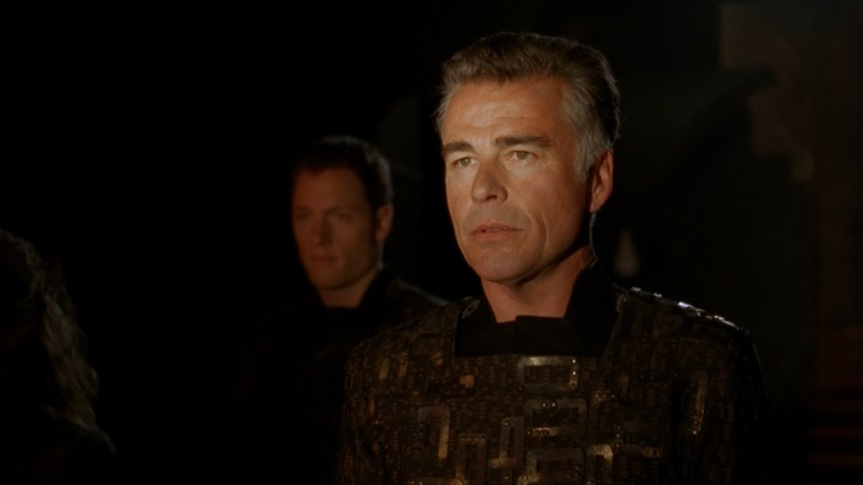 So last time, our heroes get a great big flying battleship – amusingly, O’Neill wants to call it the Enterprise, but is told no – and this time, we meet the next stage of the Replicators’ evolution: human-form versions, led by the actor Ian Buchanan, who some of us might recognize from Twin Peaks, but millions more probably recognize from the many years he spent on the daytime soap The Bold and the Beautiful. As I was saying last time about the flying battleship, I can’t swear this is a development I really wanted to see, but grudgingly, I have to admit it has interesting payoffs in Atlantis down the road.

Why don’t I like it? I like the erector-set bug Replicators because they don’t follow the sci-fi baddie template. There can’t be any appeals to the humanity in things that cannot talk, they just destroy, consume, and grow. To this episode’s credit, they don’t go down that road, probably because our heroes already know it would be pointless. Instead, they find a chink in the armor, and O’Neill immediately exploits it, which is a very good and very correct use of his character.

The kid was thrilled and excited by this one, and even deduced that the episode’s title has to do with the Replicators’ wrong-headed evolution. He really seems to love last-minute escapes. The flying battleship – which can launch from a planet’s surface remarkably quickly – takes off with seconds to spare and he just about snapped in half from clenching his fists in excitement.