We’ve been navigating around and occasionally dipping into an arc story this year. A demon-god called Dahak gave Gabrielle a magical pregnancy, and she gave birth to a powerful, evil, demigod daughter called Hope, and some ugly stuff happened that we missed, and then Hope is reborn, played by Renee O’Connor in a dual role. She even says “Hello, Mother,” just like Morena Baccarin would keep saying a few years later in the last season of Stargate SG-1. And hey, stay tuned to this blog for more on the subject of babies who grow up into adults in just a few days, because this trope never gets old. Really.

Since this arc has caused nothing but grief and despair and our heroines snapping at each other, I decided we’d power through both parts tonight. Our son hated it completely, mainly because Hudson Leick shows up as Callisto, and he can’t stand her. I thought there were a couple of good moments, but no real surprises. I had trouble swallowing the insane number of Dahak followers who have sprouted from out of nowhere in this region in what seems to have been maybe six or so months, and wonder how the assizes of the ancient world are going to deal with this many freaks needing prison time and/or execution for all the attacks on villages in part two of this story. The real problem is that Ares’s motives are so insanely unclear that he seems to switch sides every time he’s on screen. At one point, he sends a warlord running to build the largest army the world has ever seen to attack Hope and Dahak, and this plot is completely abandoned without comment.

It ends with Hope dead – I think I believe that’ll stick – and Gabrielle dead – pretty sure that won’t – and Callisto dead. I’d have to think about risking any money on that one sticking. The poor kid squirmed through both hours just ready for it to end. I try to judge with an open mind and a kind heart, but really, while the individual hours were mostly made quite well and the comedies featured a few good gags, this season was just too full of angst. I hope that when they get Gabrielle back from the afterlife, season four’s a lot less heavy.

We’ll look at some selections from season four of Xena: Warrior Princess in February. Stay tuned!

After the previous episode, I thought it was odd that they made two Lucy-lite episodes so close together, with Xena wearing Callisto’s body in one and possessing Autolycus’s body in the other. Since I don’t know anything about the production of Xena beyond “it was made in New Zealand,” I did a little reading. During a break in production after finishing ten episodes, Lucy Lawless was in Los Angeles to do some promotion for the series, and was injured in a stunt for NBC’s The Tonight Show. That rings a distant bell. I’m sure I must have heard of that at the time.

So that’s why they did some episodes with the lead actress either barely present or sidelined and not doing all the high jumps, and full credit to the producers for doing it so well. It must have required an inhuman amount of shuffling and rewriting to make the next seven or eight episodes with the lead actress barely able to move. Their way around it this time is bringing Hudson Leick back as Callisto. Since we saw her in episode eight, she showed up in episode 3.12 of Hercules, somehow became immortal, and ended up locked in an underground prison. And since Velasca, who we met last time, has munched on enough of the cheat-death macguffin to become a “god,” with all the attendant powers of lightning bolts and weather manipulation, Xena reasons the only way to stop her is to sic Callisto on her.

I thought this was a much more entertaining hour than the last one, and piggybacking on what I said last time about Bruce Campbell bringing the only entertainment value to an episode that really shouldn’t have anything to do with men, this installment has exactly two speaking parts for men: two guards at Artemis’s temple get one line apiece before Velasca kills them. It’s certainly not just the fights and the special effects, although they had our son more wowed than any previous episode of the show, it’s watching Callisto just needle Gabrielle and be effortlessly mean. I winced when Callisto pointed out that Gabrielle just isn’t very good at Truth or Dare. Melinda Clarke doesn’t fare nearly as well as Velasca, who could have had a much more interesting objective. Damaging Artemis’s temple was a nice start. It’s a shame they didn’t do more along that line, but what they did was still really entertaining. 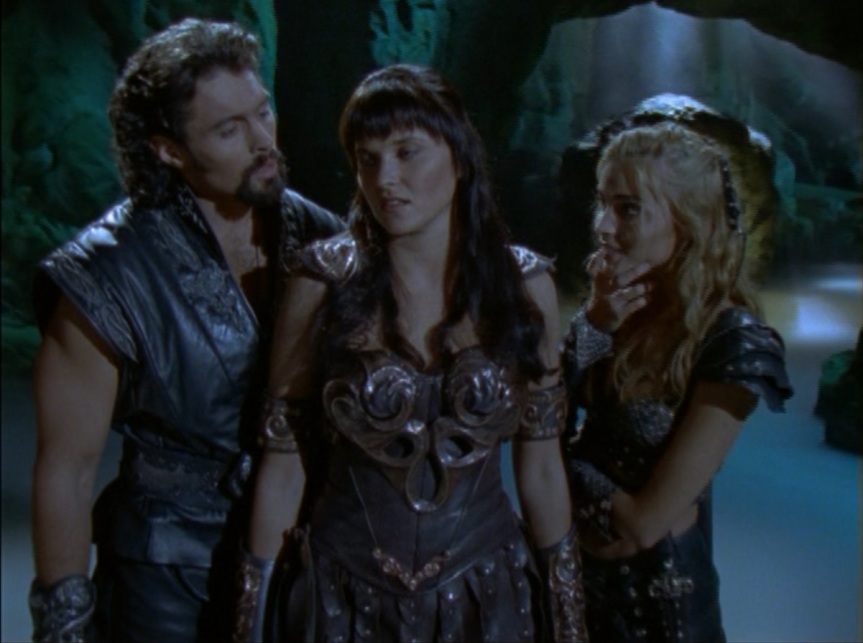 Well, I thought that was cute. Xena followed up the “identical doubles” story with another classic, the bodyswap episode. But they kept it going for an additional week, I guess to give Lucy Lawless a vacation. And just to keep things fun, they also gave Kevin Smith a new role, kind of. Ares manages to lose his seat in Mount Olympus in between installments, so the villain gets to see what it’s like to have a hangover and feel pain.

“Intimate Stranger” is the better of the two, because it’s such fun to see Lawless and Hudson Leick play each other’s parts. They each do a simply fabulous job, though clearly Lawless gets to have more fun because she gets to be really rotten for a change. That’s part of why Ares and Callisto’s teamup feels like it came straight from Batman, since the actors playing the bad guys look like they’re having way more fun than our square and conflicted do-gooders.

It ends with Callisto stuck in the Underworld again, but somehow Xena returns to the land of the living in Callisto’s body. This left our son looking for logic, because it didn’t make sense to him. Ehhh, Greek gods, magic, just go with it, we said.

And so with a name like “Ten Little Warlords,” it won’t surprise you to learn, we get the Agatha Christie plot. It’s unclear how much time has passed on Earth, but there’s been chaos among the gods and with all his wheeling and dealing in the Underworld of Tartarus, Ares lost his sword to Sisyphus, rendering him human. Sisyphus has put together a competition on a remote island allegedly to find the warlord most worthy of becoming the new god of war. Xena and Ares strike up a truce, but he’s not as handy in a fight as he thinks, and eight ruffians, who think that she is Callisto, want them dead.

I thought this was a very fun pair of episodes, but my son was relieved when Ares restores Xena’s body in the end. The kid said he was about ready to suggest that Xena dye her Callisto-colored hair and start over in a new Xena costume. And why not? “Warrior… Princess… Tramp” showed that somebody out there is making custom Xena suits, even if they build the round killing thing from wood instead of indestructible magic steel!

A little free advice for all sidekicks: if you get word that one of your boss’s archenemies is out of prison… 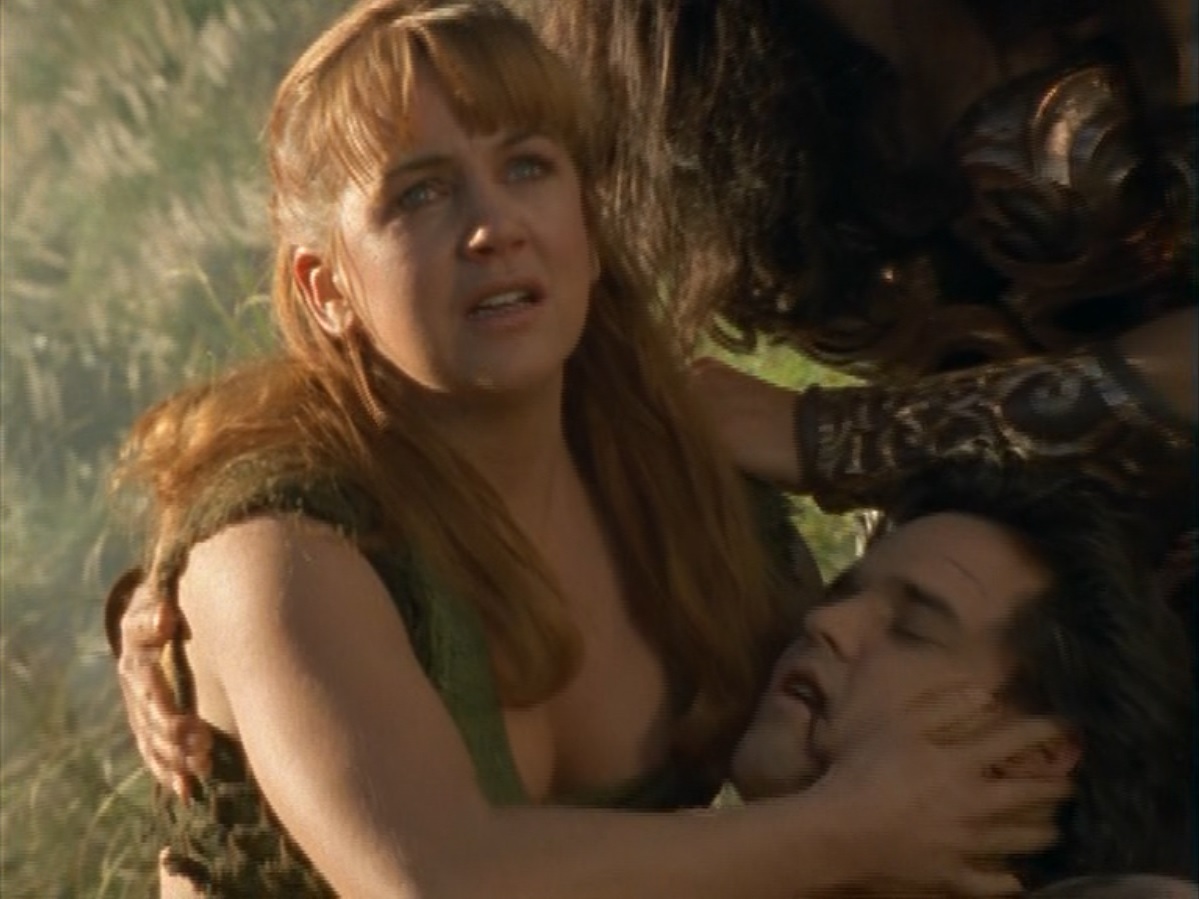 I had a good feeling I was going to enjoy this one, and I wasn’t wrong. “Callisto” is a tremendously entertaining introduction to two more recurring players. Callisto, played by Hudson Leick, is a revenge-fueled fighter who’s been training for years and building an army. Long ago, Xena’s army torched the young Callisto’s village, and despite Xena’s command to spare women and children, there were more fatalities than planned. Callisto is demented, angry, can get under Xena’s skin like few other adversaries, and is a great, great villain.

And then there’s Joxer, played by Ted Raimi, who is everything Callisto isn’t. He would love to be a great villain, but he’s just a comedy goofball. Trying to find favor with Callisto, he accepts her order to capture Gabrielle, and gets pummeled by her. Twice. Give the poor clod points for effort; he does keep getting back up to try again, but even if he did have the moves, he just doesn’t have the heart. Our son was in stitches as they brawled. At one point, he unpacks his shoddy little homemade crossbow and Gabrielle snaps the fragile thing in half with her staff. Joxer looked like she’d broken his summer camp project and the kid lost his mind laughing. 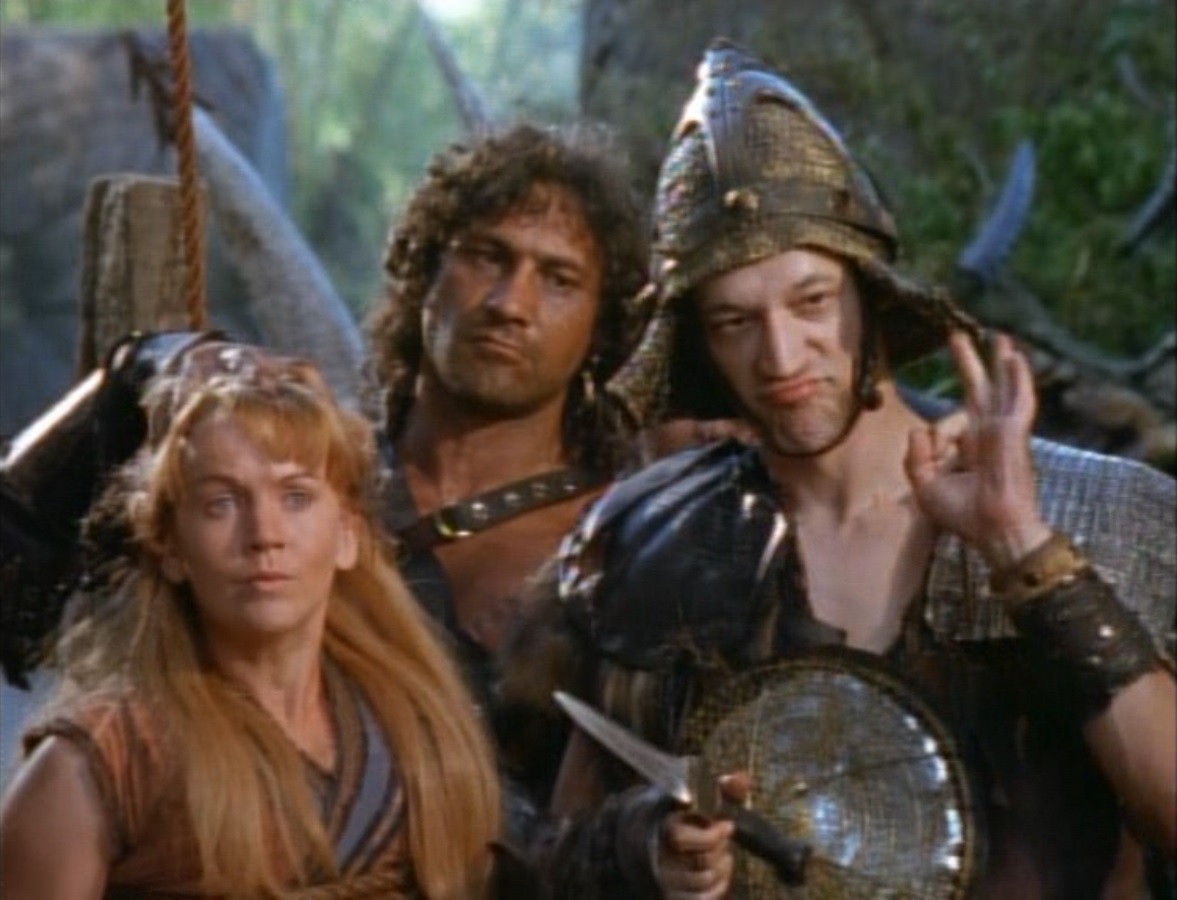 This show always employed a small army of stunt performers, and they got a real workout with this one. It builds to a downright grand climax at Callisto’s camp, which, improbably, is designed with a pair of thirty-foot walls and a bunch of ladders between them. It must have taken ages to get all the choreography right, while poor Renee O’Connor had to dangle way up in the air with a harness under her costume because Gabrielle is being held hostage while Xena and Callisto are jumping from ladder to ladder. Sure, the outcome’s never in doubt, but it’s a marvel watching them pull it off.