Tonight’s episode was “The Knightly Murders,” and David Chase was one of three co-writers, and it proved that while I may have said that I had seen sixteen of the twenty episodes, I really hadn’t. Not in full, anyway.

If you, dear reader, are in your fifties or older, then it’s possible that you first ran into this program on the The CBS Late Movie, which ran edited repeats of this series in the late seventies and early eighties. I first found the show on the Sci-Fi Channel’s Series Collection from around 1994. These were also edited, cut down to about 42 minutes to accommodate both commercials and the anthology show’s bumpers, which included soundbites from an interview with Darren McGavin. I wonder whether that full interview has ever been released.

Anyway, the Sci-Fi Channel’s editors had to chop out about six minutes from each installment, and I guarantee that they excised almost all of this wonderful scene between McGavin and guest star John Dehner, because I’m certain I would have remembered anything this delightful. Dehner is playing the police official of the week, but magically, this one hasn’t had it up to here with Kolchak. His captain is a slow and thoughtful fellow, prone to long speeches and long pauses, somewhere between Maigret and indolence, and he drives Kolchak bananas simply by talking too much about nothing at all. When a reporter presses him on what killed a fellow in his car, the answer isn’t “a jousting lance,” it’s “society.” As hilarious as Keenan Wynn’s yelling guy is, Dehner should have had this job almost every week, because Kolchak has almost no idea how to combat him.

The other amazing guest star this week is Hans Conreid, who plays a museum curator and who has the more typical task of bellowing at Carl. Conreid, as always, is completely wonderful to watch, but Kolchak knows how to handle loudmouths like him. It’s when somebody isn’t mad at Kolchak that our hero is out at sea.

Even expecting a high degree of silliness from a live-action Disney film, this one’s really silly. I’m not even talking about the premise, in which a highly-evolved cat from a hyper-intelligent civilization who goes by the name of Zunar-J-5-Slash-9-Doric-4-7 – or just “Jake” – gets stuck on Earth for a few days. He asks an unorthodox scientist played by Ken Berry, in possibly predictable casting for a role like this in a ’70s Disney film, to help him repair his ship. Circumstances require Berry’s character to get a little help from some fellow scientists and neighbors, played by Sandy Duncan and McLean Stevenson.

No, what’s really silly and not just a little painful to suffer through is the very broad and very stupid depiction of the bumbling and ridiculous military, as led by Harry Morgan’s General Stilton (“The Big Cheese”). Making the most of his four month break between seasons on M*A*S*H, Morgan takes the sympathetic officer character that he had there and just turns off his brains, playing Stilton without any nuance at all. He’s just a dumb, shouting loudmouth who is worried about “Rooskies” and is surrounded by dingbat subordinates. When the military threat to Jake is resolved by a fairly convenient phone call with the president, it doesn’t just end the plot problem of the military, it made us breathe a sigh of relief because thank heaven that was over with.

It was a bit cute, however, to cast Stevenson and Morgan in the same film. Morgan, of course, replaced Stevenson as the base colonel on M*A*S*H three years previously. 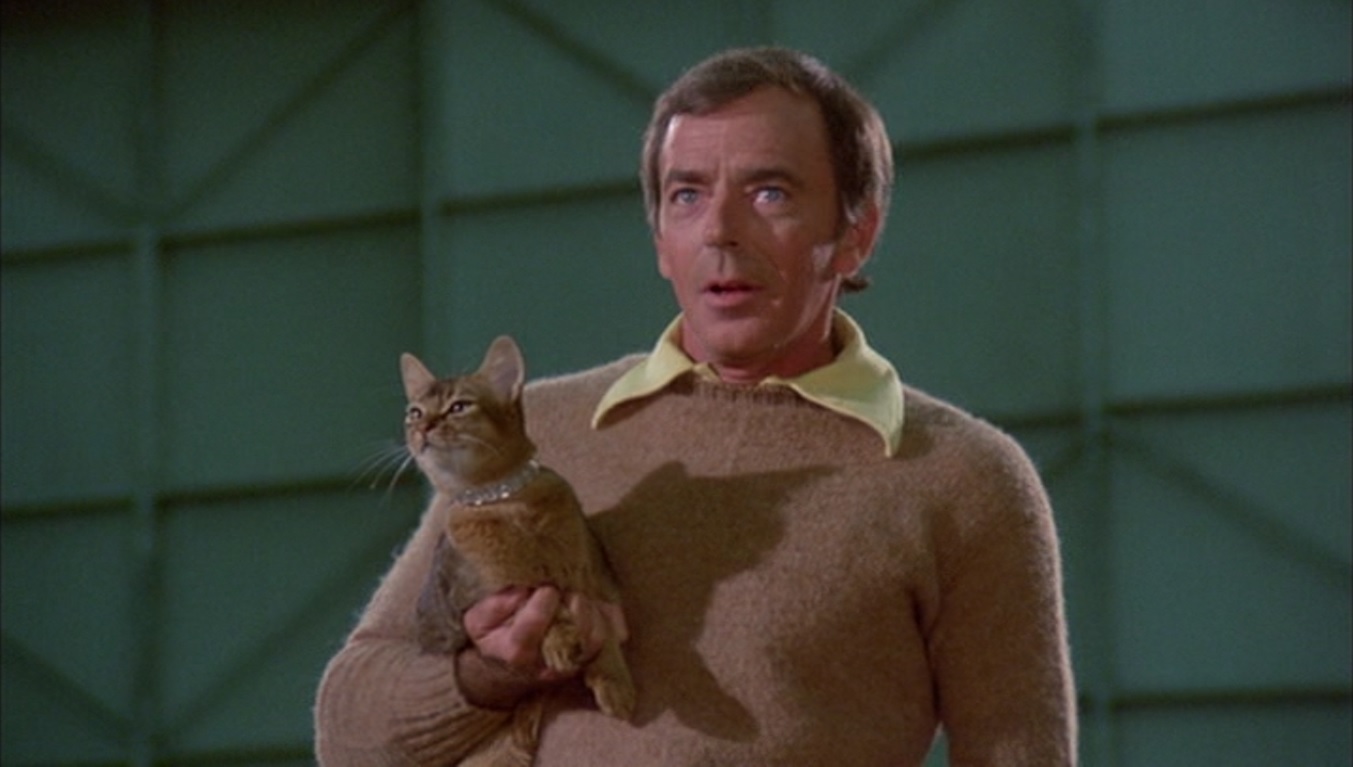 Daniel was actively bothered by the military’s role in the film, and the more the army learned of the cat, his human help, and the cat’s super-technology, the more aggravated he became. It was kind of a weird experience, since typically with films – well, we haven’t watched all that many together so far – he gets a little restless waiting for unusual things to get started. Here, we see Jake using his psychic powers to open doors and manipulate objects very early on, which had him captivated and very amused. Jake is mischievous and not above demonstrating his powers with some slapstick bufoonery. He’s also very much a ladies’ cat and very interested in getting to know the cute white cat that lives with Sandy Duncan.

Duncan gets to shine a little during a scene in a pool hall where the heroes make some wagers to finance the purchase of some gold that Jake needs for his spaceship repairs. It’s a funny scene, but I was disappointed in the huge missed opportunity. The whole movie’s full of great name actors making a few dollars for a couple of days’ filming, including Hans Conreid, Sorrell Booke, and Alan Young, and the pool hall scene is brilliantly cast, with some recognizable faces like Ralph Manza leading a crowd of extras that look so completely perfect, a bunch of sweaty men in horrible clothes looking absolutely like who you’d expect to find in a 1978 pool hall, a bunch of hustlers eager to chomp down on marks like our heroes. But for some weird reason, the director, Norman Tokar, didn’t hire anybody who could actually do any wild trick shots, which would have made the scene much more hilarious. Even when Sarasota Slim sinks everything, it happens offscreen, and all that we do see on the tables is done with special effects.

Interestingly, there’s a secondary threat in this film. Roddy McDowall plays some sort of spy, and while it is implied that his bosses are those “Rooskies” that General Morgan fears, it turns out that he’s in the employ of a guy who’s essentially a James Bond villain called Olympus! But Olympus is only there to move the story into the air for a really good special effects sequence between Olympus’s helicopter and a crumbling, cobwebby biplane that Jake is flying. It’s a very entertaining scene with some great stunt work and flying.

In the end, we were a little disappointed with Daniel’s reaction to the movie. It’s a ’70s Disney film, so the threats are pretty tame and our heroes are never in any real danger, but he responded to every possible problem as though the world would end, when of course each problem is really the launching pad for some slapstick or special effects to get our heroes out of the jam. He’s hit another extra-talkative, extra-questioning phase, and we had to pause the movie twice to explain the small details. We might watch another live-action Disney in a few weeks’ time, and I’m pretty sure that one doesn’t have any mean army men in it to get him so worried. Stay tuned!

(Meanwhile, all this has reminded me that there’s a pool hall in Cordele GA that’s said to sell some really good chili dogs. Maybe one day…)