But for a second opinion, our favorite seven year-old critic completely loved this adventure, which is built around a crime boss wanting to steal Twiki because he’s heard the gossip that the little robot “ambuquad” has developed imagination. It’s really one action scene after another, with space rescues, fistfights, and lots of running up and down lots of corridors. He was very emphatic that he liked this one much, much more than “Ardala Returns”, singling out a moment where Twiki topples a convenient stack of crates on top of a gunman. 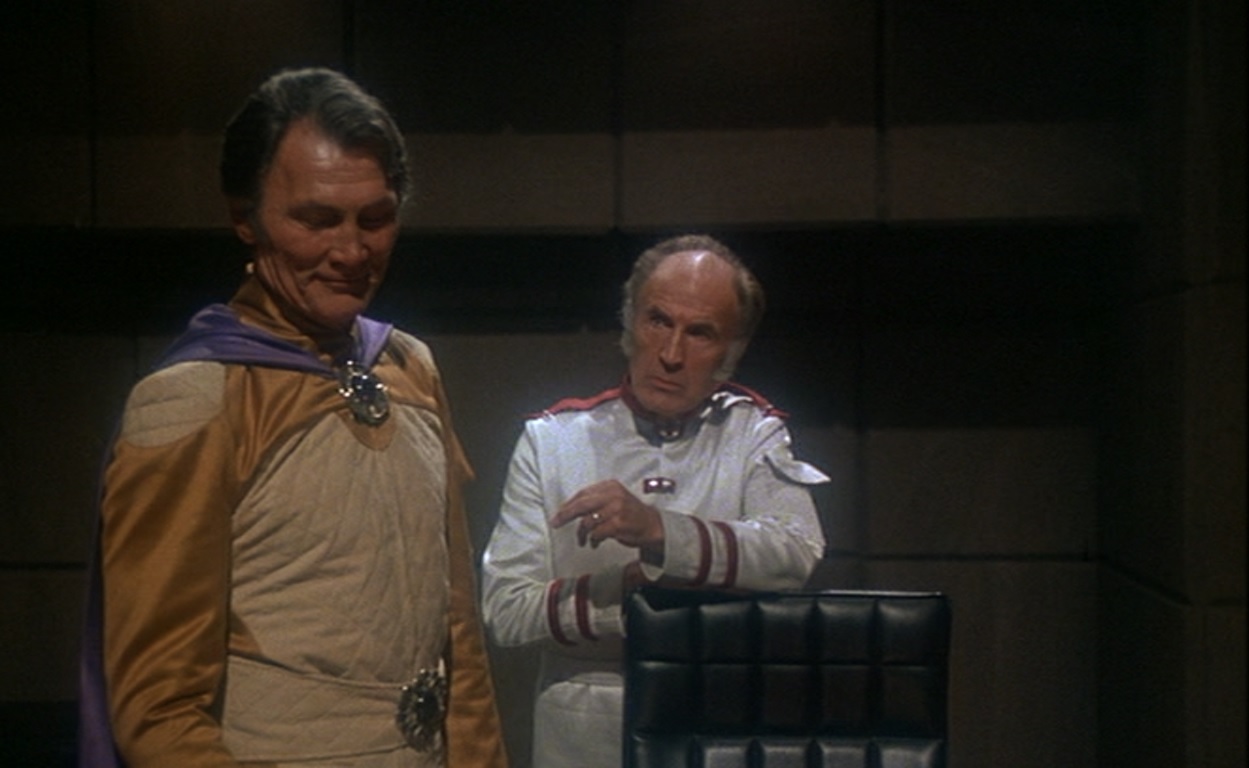 The rush to capitalize on those sweet, sweet Star Wars profits led to this terminally dull Canadian entry, which is more formally called H. G. Wells’ The Shape of Things to Come despite not having much of anything to do with any book that Wells ever wrote. It was filmed in the fall of 1978 for as little money as possible, leading to some charming moments like a bit where Carol Lynley, who plays the deposed governor of the planet Delta Three, tells all her subordinates on the studio set to wait there while she goes through a door on location to a power plant, where they couldn’t afford to take all those extras.

It ticks the requisite boxes. Barry Morse is in the Obi-Wan Kenobi role, with Jack Palance as the Vader Villain. There is a cute robot called Sparks and several similar dangerous ones that are painted black and kill people. In one surprisingly grisly moment, a robot batters a man to death with a great big rock. Big spaceships are filmed from underneath, so there was plenty here to cut into a thirty-second spot for afternoon teevee. Surprisingly, however, I don’t remember this movie at all. Sure, it’s been nearly four decades, but this was, of course, exactly the sort of film I’d see advertised on TV commercials and run screaming to my parents to take me to see.

Our son mostly enjoyed it, but the brief upper hand that the baddies enjoy really bothered him a lot more than in similar stories. I think that’s in part because the circumstances are really grim – Barry Morse’s death scene is, while still PG-rated, a lot more graphic than Obi-Wan vanishing into the folds of his cloaks – but also because the good guys seem hopeless. Nobody has laser guns or light sabers, and the heroic leads, played by Nicholas Campbell and the downright gorgeous Eddie Benton, don’t seem to have any special powers or abilities at all, just luck.

Another factor that might have bothered our son: the grim tone is really set by an honestly effective sequence set on Earth, which is by far the very best part of the movie. So the plot is that the Vader Villain has taken over Delta Three and now controls the radiation drugs needed on the moon colony. Our heroes leave the moon to confront him, but immediately have a fault and have to land on the polluted planet Earth, which had been ravaged by a robot war several years previously. 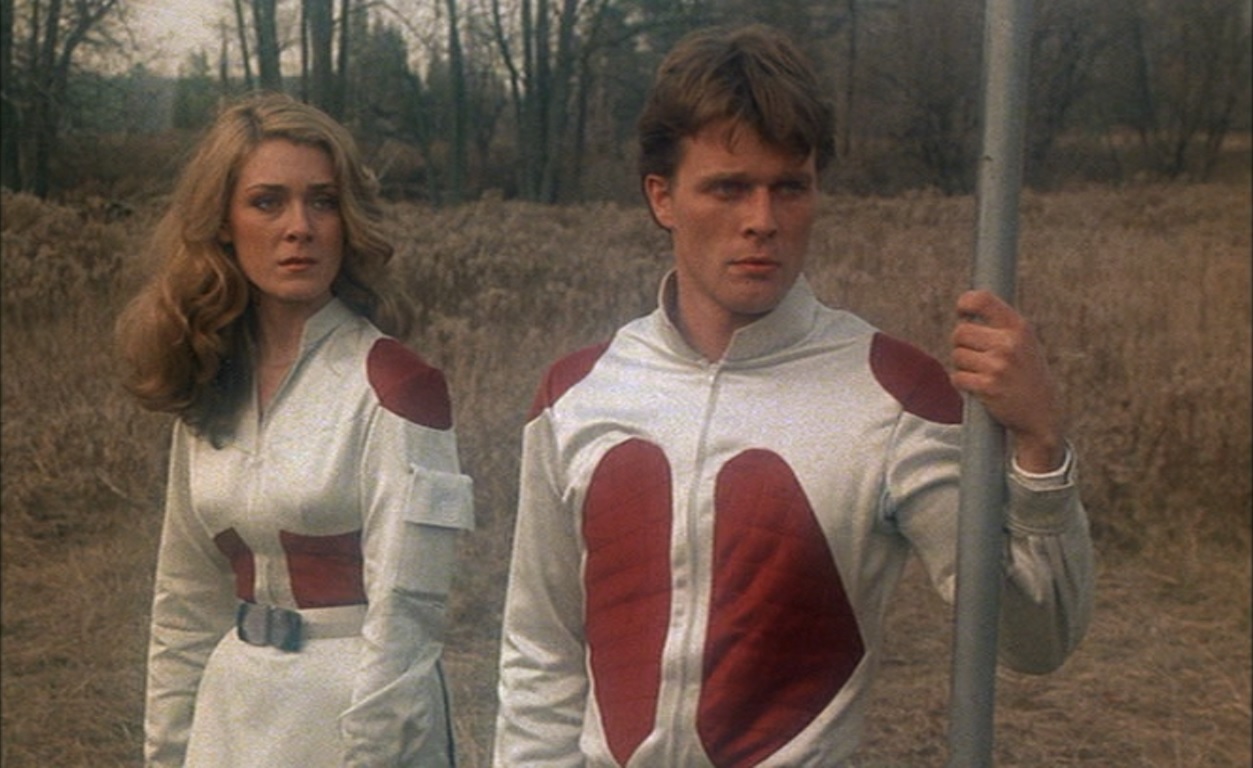 They land in a remote mining camp where everything is still and quiet among the orange leaves of the trees, except for some strange, small shapes that the camera keeps finding, hunched over among the weeds. Campbell and Benton explore the isolated place looking for the operator, and it’s all shot like a truly excellent horror film from the period, not a bombastic outer space movie. Experience with this sort of story suggests that the shapes will turn out to be mutant raiders or something, but that gets subverted, too.

It’s a real shame the whole movie couldn’t be as effective as this sequence. The director, George McCowan, mainly worked in television in the 1970s and regularly directed cop and detective shows like Cannon and The Streets of San Francisco. His work here suggests he was a bit lost trying to make killer robots and spaceships seem believable or threatening to grown-ups, but give him an old radio transmission tower and a couple of attractive leads somewhere in a quarry in Canada, and he could make something a little magical.

Eventually, of course, everything has to blow up, because that’s what kind of movie this is. That thrilled our son much more than anything in the woods.

Our son was mostly baffled by this episode, because he had no idea what a beauty pageant was. Surprisingly, considering the inevitability of an “undercover at a beauty pageant” episode of any TV show made in the 1970s with a female lead, this one was actually pretty intelligent, with a good twist about what the saboteur in the story is actually after. Guest stars for the story included Eight is Enough‘s Dick Van Patten and Honey West‘s Anne Francis.

I’ve previously joked about how Wonder Woman was always filmed on the other side of the hill from M*A*S*H, but another similarity is how both shows went to the expense of hiring vintage automobiles and costumes but didn’t tell their stylists and hairdressers to give any of the actors or extras period haircuts. This was most egregious on M*A*S*H toward the end of its run when they were running so far out of steam that Loretta Swit had a ’70s Farrah do and Mike Farrell had a mustache that nobody in the Korean war would grow for at least fifteen years.

On this show, I insist that Lyle Waggoner’s hair is a little too long for 1942, but the extras or two-line actresses in the “Miss GI Dreamgirl” contest are really, really hilarious. They gave Lynda Carter a ’40s-looking red wig for her undercover gig as “Diana Paradise,” but about half the girls in the bathing suit portion of the pageant would look totally natural on a bedroom wall poster right next to the one of Cheryl Tiegs.

I guess we’re not meant to look too closely. After all, the cutaway shots of the audience in the officers’ club theater are all from stock footage of some World War Two movie, and all those soldiers are clearly in an outdoor pavilion.