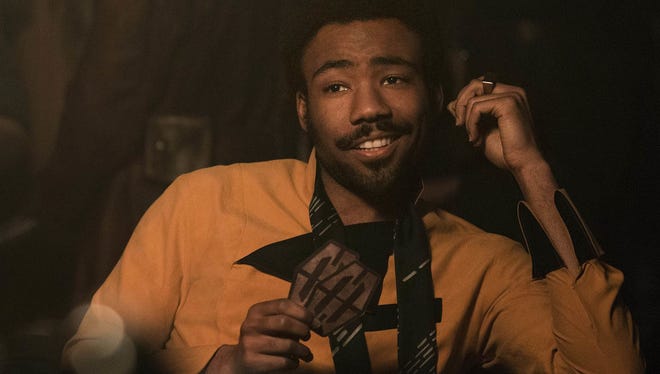 I really don’t feel like writing this morning, so for posterity: we rewatched Solo today and enjoyed it tremendously again, and I’ve decided that my favorite Star Wars movies are the ones that have the least amount of Force stuff in them: this and Rogue One.

Also: where the blazes is Donald Glover’s series of Lando movies and TV shows?

When I was a kid, there were a few elements of the Spider-Man world that aggravated me, in that little kid way, so much that I didn’t often buy Spider-Man’s comics. There was Aunt May, who somehow convinced herself that Peter was a sickly boy and was always in danger of getting the flu or something, and there was Flash Thompson, who seemed too stupid to be a believable irritant.

Part of me, today, thinks most of the comics had moved past them by the late seventies, when I might have been looking at the spinner rack in the drugstore for books to buy for 35 or 40 cents, but there were also so many Ditko and Romita reprints floating around that I never knew what I’d end up buying when I bought a Marvel comic. I was kind of a dumb kid in that regard. Well, in many regards. But it took me until middle school to realise that Batman and Batman’s Detective Comics were two separate books. Marvel was even more confusing to me at age eight.

And then there was the Vulture. Spider-Man seemed to have a rogues gallery full of the most pathetic menaces, and the Vulture was the dopiest of them all: an old guy with wings. In 1963, I understand now, Marvel didn’t have very many characters who could fly. But their universe grew, and this bozo, who should have been left behind as a one-off, somehow stuck around, pretending to be a threat.

So one of the reasons I enjoy Spider-Man: Homecoming so much, apart from it having such a beautifully crafted script that fits in so neatly to the existing Marvel Cinematic Universe and being so well cast, is that it effortlessly redeems all three of these characters. Flash Thompson is a jerk, but a smart guy who all Peter’s friends and classmates enjoy. The Vulture has motivation and alien technology to make him dangerous. And Marisa Tomei’s Aunt May is the perfect mom – or aunt – for the modern age. Her worry that Peter might have been on the Staten Island Ferry, when we have no reason to think that Peter has ever ventured anywhere outside Queens before he met Tony Stark, is totally believable and true. Why didn’t Peter check himself in as safe on Facebook? Doesn’t he know May would be worried sick?

The whole film is full of delightful punctuations that make the experience a complete joy the second time around. I loved Donald Glover’s character advising Spider-Man that he really needs to get better with interrogations. I loved Michael Keaton’s face as he figures out who’s in his back seat. I loved Zendaya just being a harmless pest for no good reason. I loved Bokeem Woodbine – who was one of the best elements of the marvelous second season of Fargo – slowly figuring out his new weapons. I didn’t mind the product placement from Lego about another Disney property (corporate synergy!!). And it has the best post-credits scene of any Marvel movie. It’s a delightful, joyful movie, and one of the best in the series.