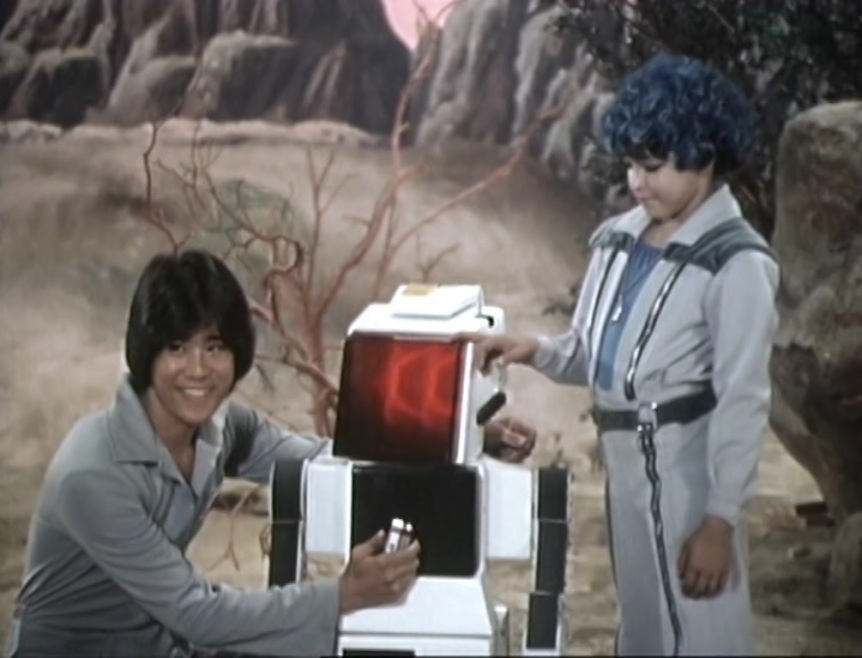 Another very weird coincidence this time: this episode of Space Academy features a guest star named Don Pedro Colley. He plays a lonely man on an isolated planetoid who messes up Tee Gar’s experiment. I looked up his credits on IMDB, and found that he’s been out of the business for quite some time. But literally two weeks ago, Midnight Massacre, his first screen credit in eighteen years, was released, and he seems to have two other films in the works. Good to see he’s still around and getting work.

Last time out, I mentioned how Space Academy is the quintessential ’70s sci-fi show. Another point for it in that sweepstakes: Peepo. This robot is very likely the first of all the many R2-D2 clones and copies that made their way into movies and TV and grocery store personal appearances in the late seventies and early eighties. K-9 from Doctor Who is sometimes given this credit, but K-9’s first story, “The Invisible Enemy,” was taped in April 1977, a month before Star Wars was released. Space Academy went into production in July and began broadcast in September, and K-9’s first story sat on the shelf for six months and was first shown in October. Unless there’s a cash-in I don’t know about, I believe Peepo was the first robot character to have been designed as a reaction to Star Wars, and he beat K-9 to screens by a couple of weeks.

Did Peepo succeed in charming children? Well, the grownups tonight were a little restless, because Dr. Science was not happy with Tee Gar’s goofball ideas, nor his downright reckless – yet approved! – methods of experimentation. But when Colley’s character picked up Peepo and walked off with him, our son growled “Not cool, not cool,” very annoyed that the robot might get hurt. He’ll probably fall completely in love with K-9 when he meets the tin dog in a couple of years.