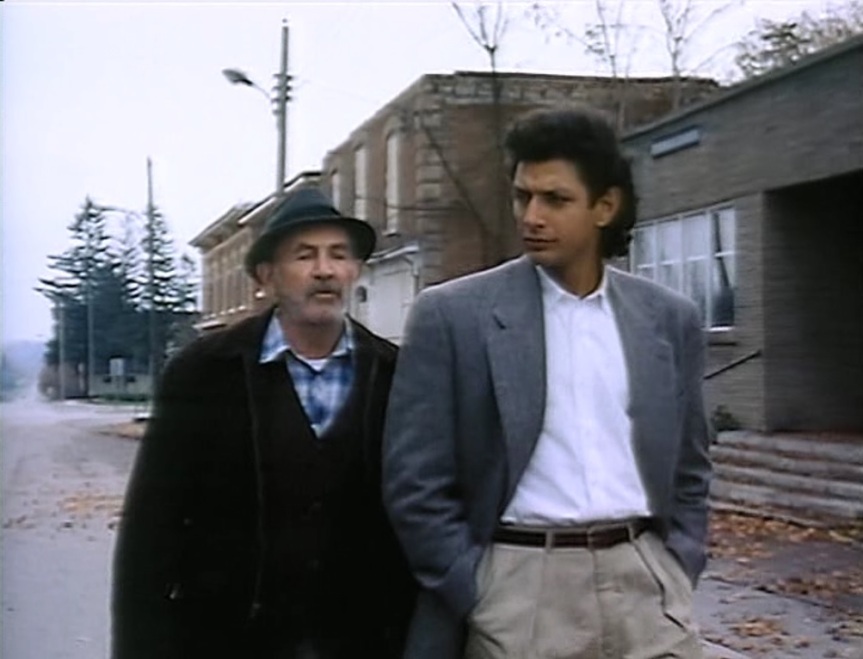 Well, the debut episode of this show was a little unpromising, but we soldiered on and I enjoyed the fourth installment very much. The kid thought it was very strange and creepy, and he was absolutely right. In “The Town Where No One Got Off,” Jeff Goldblum’s character gets argued off a train by a loudmouth played by Cec Linder, who says that if bleeding heart small town apologists like him think that rural life is so bucolic, why not get off the train and see what happens. Goldblum has nothing better to do for a couple of days, conveniently, so he does just that, and steps off into the least friendly town in Canada.

I just thought this was really interesting. There might have been a Little Town With a Big Secret trope at play here, but we never learn what that Big Secret is; everybody is just an unbelievably hostile jerk. The installment was filmed on location in the small village of Alton. About eight years earlier, the producers of The New Avengers had semi-successfully turned the town of Vaughn into looking like a mountain range full of stereotypes separated it from Toronto. Alton is admittedly a good deal further out than Vaughn, and I’m sure that thirty-five years ago it was even more isolated, but this feels so far out that I’m reminded of those counties in Oregon so far east of Portlandia that they want to secede and join Idaho because they’re sick of them big city lib’ruls.

This town – and remembering that it’s not meant to really be Alton, but rather a place called – wait for it – Erewhon – is almost totally abandoned, and the producers did a good job shooing the actual residents out of sight so that six actors could take turns snarling at Goldblum. One old guy finally starts talking to Goldblum, who’s grown a mighty eighties mullet since we last saw him in Buckaroo Banzai, made the year before. Then things really ratchet up, and honestly only an actor as unpredictable as Goldblum could make the resolution work. I won’t pretend it’s entirely satisfying, but it certainly was fun to watch.

The New Avengers was constantly short on money, in part because there wasn’t a TV network financing its production. The people in charge did that themselves, hoping for international sales later. So when the money started running out in 1977 and a Canadian company said that they were willing to pay for four episodes, but only if they were made in Canada, Brian Clemens wasn’t really in a position to say no.

So in July and August of 1977, production decamped to Ontario. These four episodes are nobody’s favorites. “Complex” was written by Dennis Spooner, and about the best thing you can say about it is that it’s better than “Medium Rare.” It’s an evil supercomputer story – The Avengers had done that a couple of times before – and it guest stars Cec Linder. He had played Felix Leiter in Goldfinger and scientist Matthew Roney in the original TV serial version of Quatermass and the Pit, and he was mainly working in Canada in the late 1970s.

But really the most interesting thing about “Complex” is that it’s filmed in Toronto. And yet the director, maddeningly, picked utterly anonymous locations, giving the impression that Toronto is any mid-sized, bland, beige, largely clean city, free of landmarks or anything of interest. They call this Toronto, but it might as well be Cleveland. 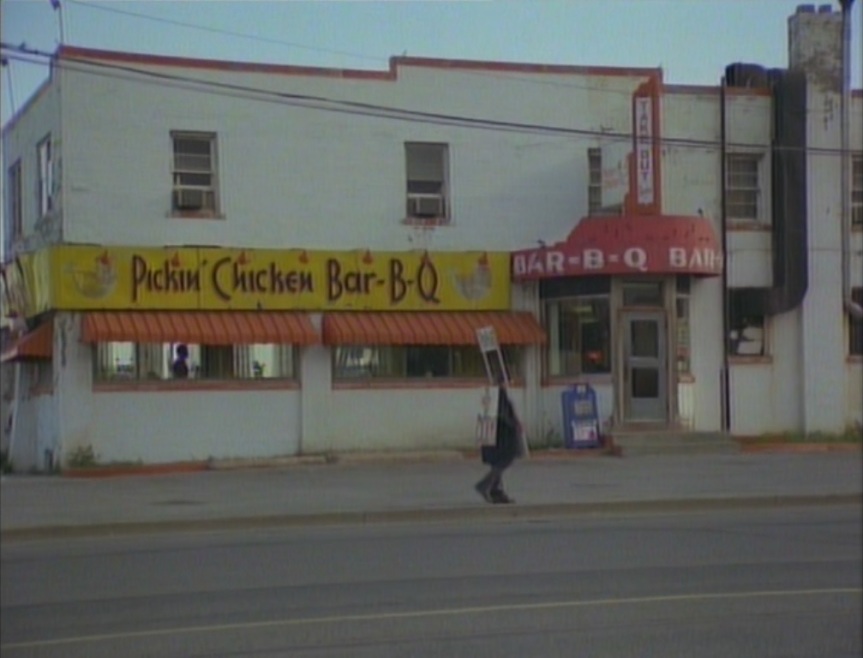 I have only been to Toronto three times, decades after these were made, and don’t pretend to know the city well, but I guarantee you that given a TARDIS trip back to July 1977, I could have found a whole lot more interesting things to stick our heroes in front of than this director did. I’m going to hope the other three episodes show off the city a little better, because the only remotely identifiable places in “Complex” are the westbound lanes of Lawrence Avenue, and the Pickin’ Chicken Bar-B-Q, which had been closed for at least seven years and was on Lake Shore Boulevard, at a point which was then on the outer fringes of one of the streetcar lines. Fingers crossed for the next three. I know we’ll see the swan boats of Centre Island, but I wonder what else…

And yes, call me predictable, but there are as yet undiscovered tribes in the heart of the Peruvian jungle who knew I was going to screencap that barbecue restaurant.