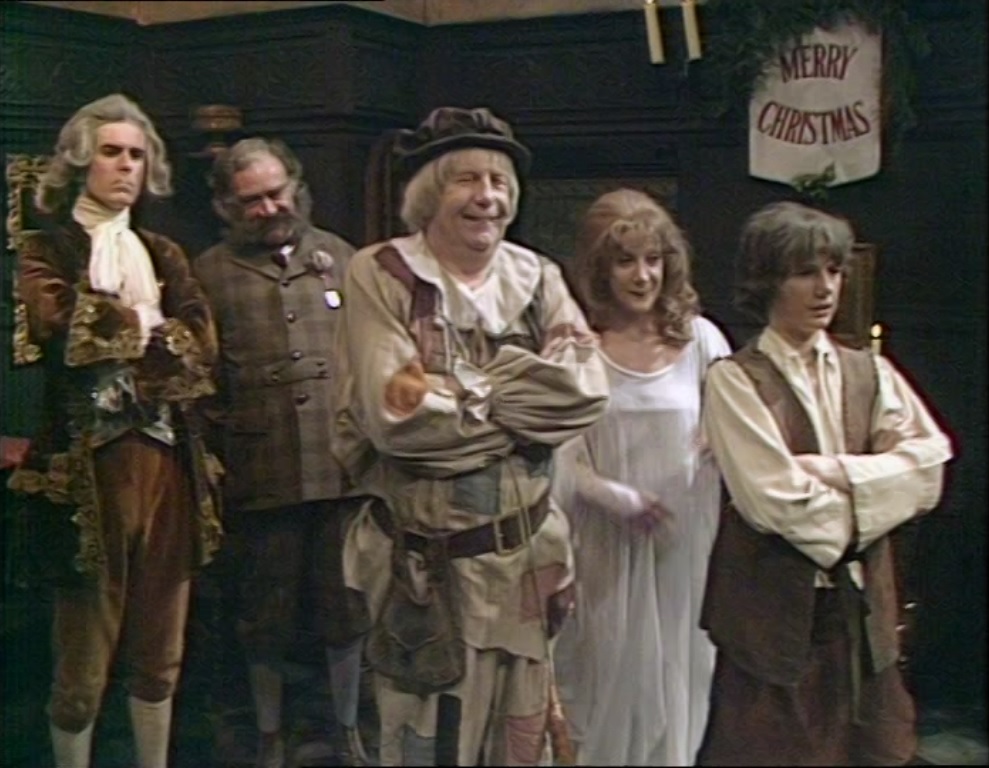 And now back to dear old Motley Hall, for a story that begins on Christmas Eve 1976 – the day this episode was first shown – and travels back to the 1880s, when Sir George was a lad of ten. The house has brought them back in time because an elemental spirit has somehow entered Motley Hall and is making everyone extremely angry. It feeds of the negativity brought by fighting and arguing. Sir George gets to watch his parents having a holiday row while everyone else consults Gudgeon’s great, great grandfather for what he might know about the tree that was used for the yule log. It’s haunted as well!

We enjoyed that a lot. It was a very pleasant, intelligent, and sweet little surprise. There are a few smile-worthy moments, but no wild comedy. It’s anchored around the scenes of Sir George talking to his much younger self, and Bodkin talking to the elemental. They’re just sweet and charming and very well-written and acted. It’s flatly one of the best Christmas specials of any show I’ve ever seen, and since they did another in 1977, I’m very curious to see it in a few weeks.

I was glad to see Neil McCarthy show up in the final episode of Motley Hall‘s first series. He had a regular role in the original run of Richard Carpenter’s Catweazle. I’m also always glad to see actors play really different roles than how I know them, and I’ve never seen McCarthy in a part anything like this before. He plays a fast-talking, posh professor with some theories about ghosts being nothing more than vibrations and wavelengths turned into hallucinations by the human subconscious. So while Sir George is yelling at the professor and insisting that he’s not an illusion, Peter Sallis’s character, the real estate agent, has a proper conversation with the White Lady. Much as he doesn’t want to hear it, he now knows that a small group of ghosts lives in the building he wants to sell. I hope this comes up again in the second series!

The best part of the episode came early on, as McCarthy yammers on about his theories, enraging Sir George, who bellows “Balderdash!” back at him. And our son did another one of those things where he starts laughing at a gag because he hears me roaring, and not because he actually understands the joke. The White Lady reasons that she must have had suitors once upon a time. Bodkin asks “Who, Burke and Hare?” I made sure to explain who they were after the episode, and left him a little creeped out. But it was graverobbing for a good cause, I insisted. It’s not their fault that science needed more corpses than the community would provide, really.

This episode is back to being nice and silly again. The ghosts decide to hold a seance to contact one of Sir George’s old military buddies, but instead they pick up a nasty doppelganger of Matt. Everybody’s even more short-tempered than usual because it’s storming and Peter Sallis’s character, the real estate agent, hasn’t come by to inspect a leaky ceiling in an upstairs room, and some of them are taking it out on Matt because they’re all envious of his power to leave the building. The evil doppelganger quickly starts setting everyone at each other’s throats. I liked how it opens up a few more questions about the nature of death and the afterlife in this world, but mainly we all liked seeing everybody chasing each other around and yelling about all the slights they’ve heard Evil Matt spreading about them.

Marie had noted after we watched the first episode that the only woman in the cast is the one who didn’t have a name. I grudgingly agreed, although the White Lady is a spectral archetype. That’s not to say that they couldn’t have had a second woman in the cast, but a howling female phantasm with no identity and no memory is a recognizable figure in the lore of ghosts. “Perfidia Blackart Rides Again” isn’t a particularly funny episode, but it is interesting to see the White Lady react to some pretty solid evidence as to who she was and how long she’s been at Motley. She may have been in the Hall since the 1640s. Then again, she might not. After all, you can’t believe everything you read. 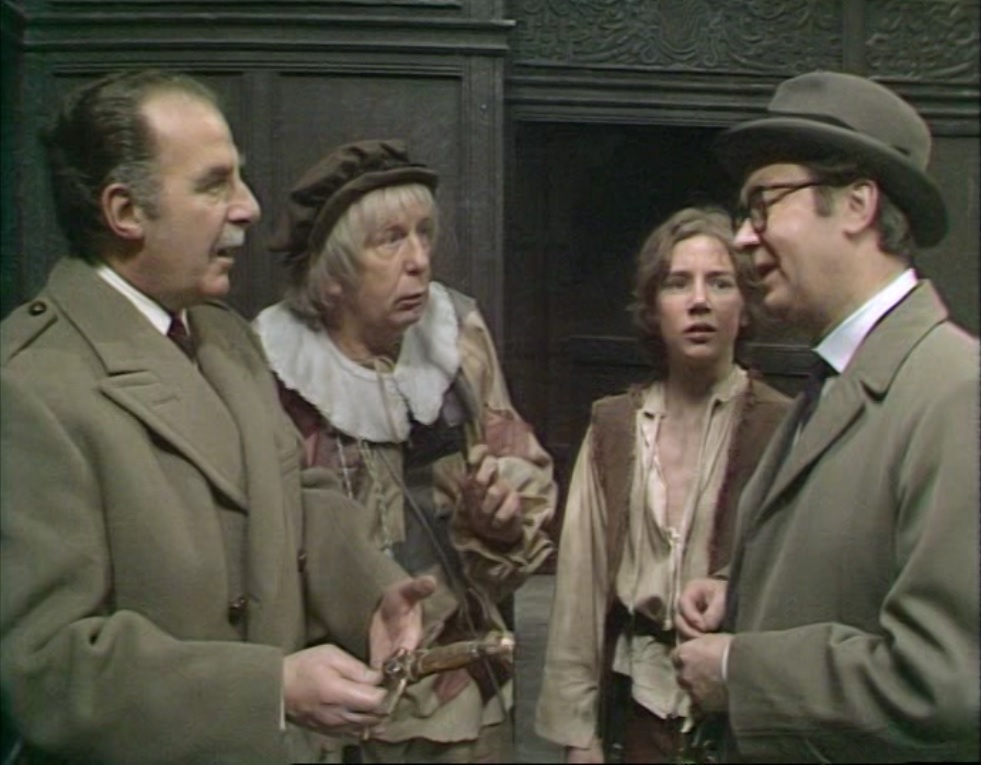 It’s nice to see Peter Sallis again as the realtor who keeps Motley Hall in cobwebby but firm shape for the right buyer. This prospect is from the British Banana Company, and he unlocks a secret panel where a broken sword hilt has been locked away. Removing the hilt removes a ghost that predates our phantasmic five: Bad Lord William, who has an awful temper and neither understands nor cares that things have changed in his absence. I didn’t think this one was nearly as funny as the previous two, but it certainly kept me entertained, and the kid just loved it. Bodkin and Bad Lord William have a swordfight that won’t go down as anybody’s favorite, but to be fair, Bodkin’s probably never fought with anybody before, and the other guy’s not had any practice in three centuries.

A few years previously, Richard Carpenter had written a hilarious episode of Catweazle where the timelost magician encounters a television for the first time. The gag is repeated here, brilliantly. Some of the ghosts figure that this thing is just a wireless radio with a glass front. There are eight of them in their home. Some thieves stole them about a week ago and dumped them in the hall for safekeeping.

Bodkin and Fanny decide to settle whether or not it’s a wireless and switch it on during a horse race, which blows their minds. But several minutes later, Bodkin has lost patience and is worried about the transfixing effects on his friends, so he switches it off. In the time it takes for the argument to end, the races have finished and the station has gone over to a cooking show. Next a yoga instructor asks the audience when was the last time you really breathed? It was several minutes for our son and me; we were choking from laughing.

There’s an actual plot beyond the gags about a policeman who finds the seven remaining televisions and can see Sir George, but not the others, and the thieves, who spend a very lucky amount of time not being in the rooms where plot is happening, and it’s all very funny, but the ghosts freaking out about the TV is absolutely next-level hysterical. I’m so glad I took a chance on this show. 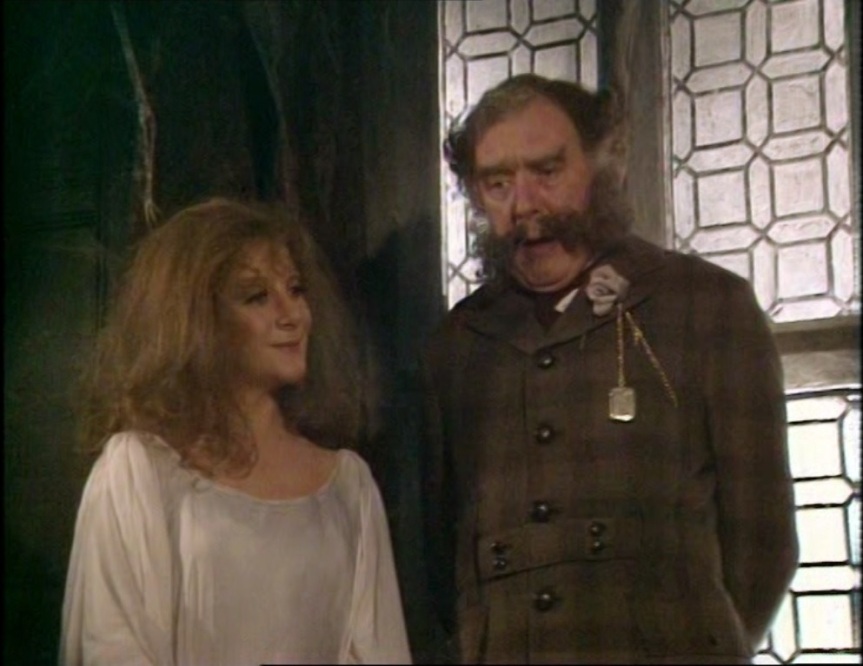 The presence of a ghost hunter is a neat obstacle for the five characters in this story. Normally, they’ll do something to frighten away people who poke their noses into their home, but that’s the last thing they want to do here. Giving this guy any indication that there’s anything unusual here will encourage him to come back with more psychics and charlatans and people tying string with bells on it across their staircases. So it’s a terrible time for another ghost to show up. Old Gory was a knight who was decapitated during a battle at the future site of Motley Hall during the Wars of the Roses (1455-85) and shows up every five years to complain and grumble and make everybody miserable. He doesn’t care whether he’s photographed; why should their plight concern him?

We just adored this; it’s sublimely silly, and when half our heroes drag Old Gory’s body one way while the others run off with his head, we all had a huge laugh. That’s not something you see every day. Our son called Old Gory “a headless horseman without the horse.” Poor fellow; it never occurred to him in five hundred years that nothing’s stopping him from reattaching his head to his shoulders. 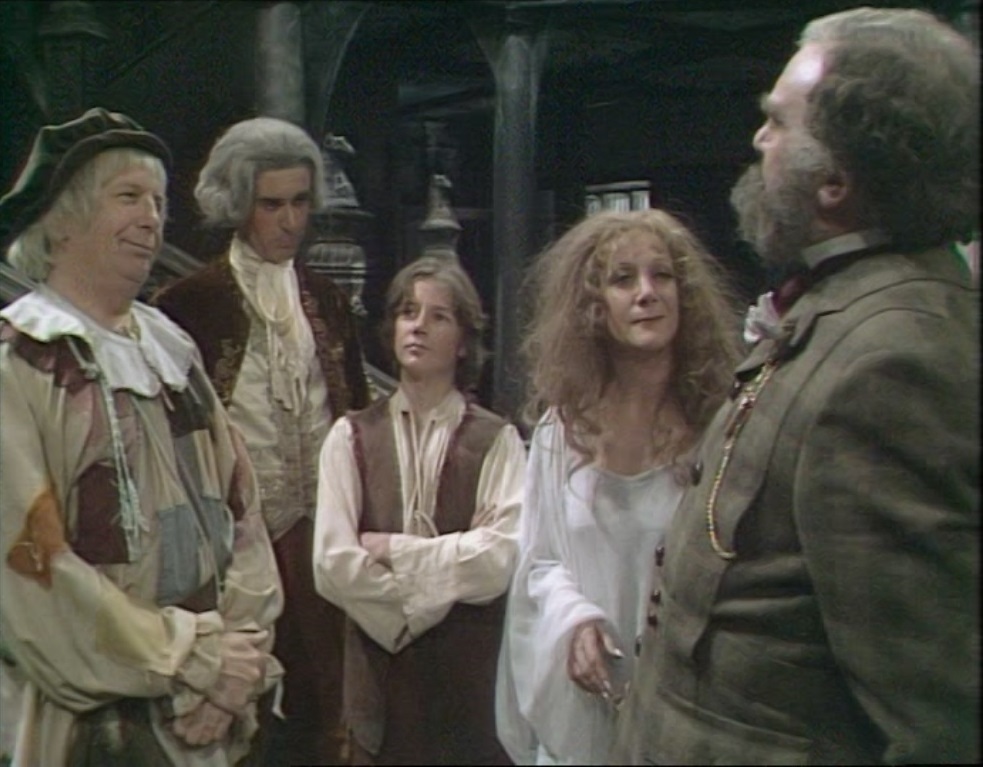 And now back to 1976 and another program I’ve never seen before, and probably hadn’t heard of when we started this blog. The Ghosts of Motley Hall is a children’s comedy made by Britain’s Granada Television for three series between 1976 and 1978. It was devised and written by Richard Carpenter and directed by Quentin Lawrence, the duo behind the delightful Catweazle, although that earlier show had been filmed entirely on location and Ghosts is videotaped by three big cameras on a big set, so it certainly doesn’t have all the farms and forests and villages and old railway stations to play in. But that makes sense here, because four of the five ghosts of this story are unable to leave their home.

From left to right in the photo above, that’s Arthur English, Nicholas Le Provost, Sean Flanagan, Sheila Steafel, and Freddie Jones as our ghosts, each from a different period of history and, except for the young fellow in the middle, cursed to haunt the building forever. Matt is the exception; he was a stable boy and has been haunting the stable for the last hundred and sixty or so years, and had no idea there were other ghosts nearby. But after the death of the last living Uproar – at least two of the ghosts are from the Uproar family – Matt overhears a developer and a corrupt building inspector planning to pull down the building, which has sat vacant since the 1950s. He decides to enter the hall since he’ll never have another chance, meets the others, and they work together to foil their scheme, thanks to a little help from the caretaker, played by the wonderful Peter Sallis.

I thought this was a pretty good pilot. It’s not a boisterous physical comedy. It’s whimsical and the tone is a little sweetly sad, and, in the way of these things, there’s not a really great obstacle to overcome because there are five rather extraordinary characters and a very outre situation to introduce in the first episode. But I smiled a lot and thought it was very charming, and, most importantly, our son was really pleased with it. In the end, the ghosts congratulate themselves on saving their hall – for now – and give themselves a round of applause, and our son jumped up and joined them! So not at all bad, and I’m looking forward to seeing what will come next.