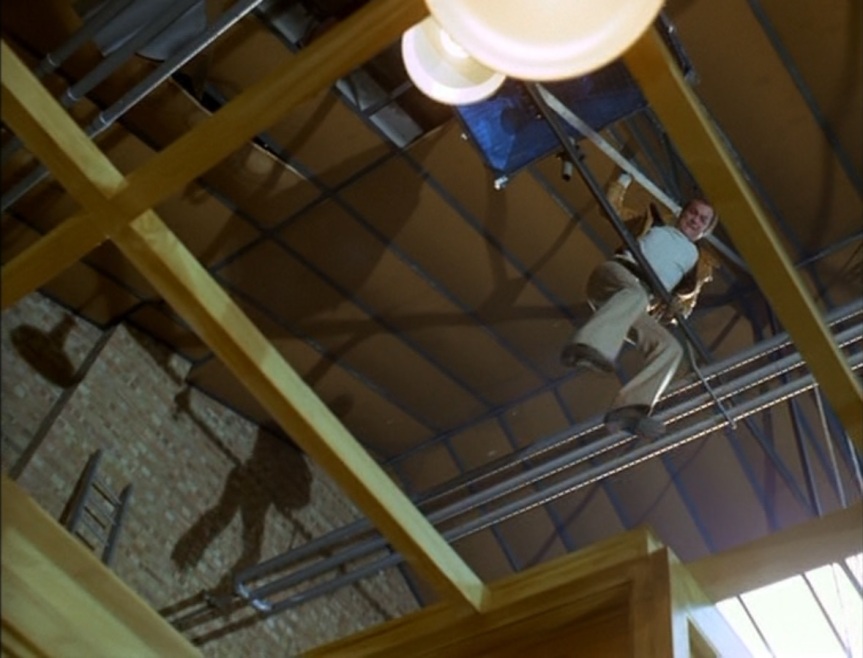 At dinner tonight, we enjoyed talking about stuntmen, and how sensible producers and directors will insist on using them for any work where a performer risks injury. Recently, we looked at “Babylon”, an episode of Stargate SG-1 where the production team overruled Ben Browder’s desire to keep doing the physical stuff and got a stuntman in. That’s because they were smart and didn’t want a repeat of something we saw a while back: a stunt gone wrong in 1974’s “The Sontaran Experiment” in Doctor Who, which left Tom Baker with a broken collarbone on location on some Devonshire moor with half the story left to tape.

I mentioned this, of course, because Tony Curtis spent decades depriving stuntmen of work. While I don’t think that “The Gold Napoleon” is a particularly strong episode of The Persuaders!, I picked it because of this great sequence where Danny Wilde goes crawling along the rooftop of a warehouse, and then ducks in through the ventilation shaft, dancing along the rigging with perfect balance. There are days I can’t even walk on a perfectly level sidewalk without falling down, and here’s blasted Tony Curtis, wearing far less sensible shoes than me, hopping from rail to rail with grace and style. The kid enjoyed it, especially a fight at the end, but it is certainly played more straight than the brilliant pilot was, with fewer opportunities for silliness.

Anyway, “The Gold Napoleon” was the only Persuaders! installment written by Val Guest, who was much better known as a film director, though he had penned some screenplays thirty or forty years before. This was written in between two cult classics that Guest directed in 1970 and 1972: When Dinosaurs Ruled the Earth and Au Pair Girls. Unlike the movies, everybody’s fully dressed in this one.