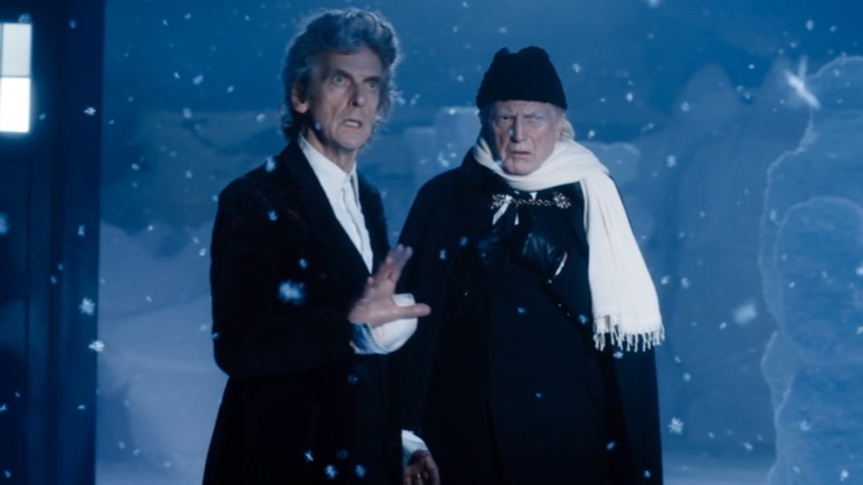 The kid did, however, like this a lot. As well he should. “Twice Upon a Time” is magnificent and charming and occasionally very funny. It’s a great epilogue. Regeneration speech may be a bit long. That’s it. David Bradley, who had played William Hartnell in 2013’s Adventure in Time and Space, now gets to play Hartnell’s Doctor, and why they’re not putting him in a studio to remake “Marco Polo” and “The Myth Makers” and “The Daleks’ Master Plan” can only be chalked up to typical BBC incompetence. Mark Gatiss gets to take a final bow, this time as an actor again, in the role of one of Brigadier Lethbridge-Stewart’s ancestors, and since the montage of old friends was contained to the previous episode, the only hugs and smiles this time are contained to the Twelfth Doctor’s actual companions.

Bill and Nardole are represented by glass avatar memory-people, since Bill was extracted from Cyber-conversion and given a new start as a liquid-dimensional lifeform, and Nardole got to live out his days a few floors away from the Cybermen. The memory-people right the wrong of “Hell Bent” and restore the Doctor’s memories of Clara, which is lovely. And there’s one old and bizarrely unexpected old face: Rusty, the self-loathing killing machine from “Into the Dalek”. Anybody who had money on Rusty in the “which character from the previous 39 episodes will turn up” sweepstakes must have cleaned up.

And it’s goodbye here to Steven Moffat, who really does deserve all the applause in the world for writing some of the best stories of the program’s first four revived years, and running a great ship for the next six series. As I’ve said, things wobbled a bit in series six and seven, but it remained watchable and unpredictable and even at its loopiest, there was always a lot to talk about. Bowing out as well, director Rachel Talalay, who is unquestionably among the best directors in the seat in the modern era. She finished really strongly here.

I used to say that my favorite Doctor is the current Doctor, and I always meant it. Since this series grabbed my imagination, I’ve always enjoyed revisiting old stories, some of them repeatedly, but it’s the character’s next adventure that’s the one I most want to see. That changed here. I like Jodie Whittaker’s Doctor a lot – well, I must, I’ve written fic with her twice (haven’t published the second one yet) and I hadn’t completed any fic with any Doctor since about 1993 – and I’m looking forward to series thirteen. I’m also looking forward to giving her run another spin for this silly old blog, starting in November and running to the blog’s conclusion in January. And of course I can’t wait to hear who Russell T. Davies has cast as the Doctor to follow her.

But Capaldi, despite starring in two of the episodes I loathe the most and two others that just broke my heart they were so disappointing, he’s my Doctor for good, I think. The other 36 are all complete gems and I love them to pieces. He was brilliant, just brilliant as the Doctor. When everything clicked, his run was silly, heartbreaking, thrilling, intelligent, and ridiculous. Emphasis on heartbreaking, often. Donna Noble is probably my favorite companion of them all, but Nardole and Bill are right behind her.

The saddest moment in all of Doctor Who comes when he regenerates, and the new hand is smaller, and the wedding ring celebrating the marriage to River Song slips off her finger, and it falls to the floor, and it is never mentioned again.

Davies, get on that.