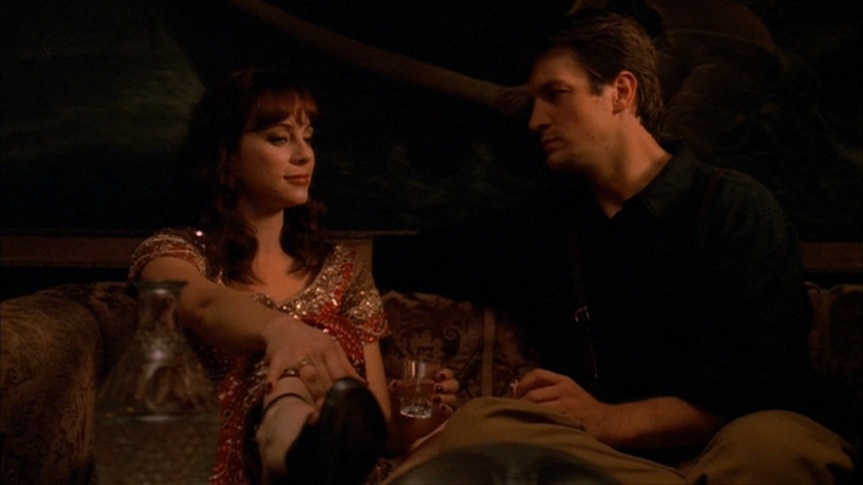 It’s fair to say that this episode wasn’t going to be a complete winner with our favorite ten year-old critic. He enjoyed the gunplay stuff enormously, but there’s a whole lot of grown-up stuff in this one as well, and not just the smoochy bits. We talked about whether to explain to him beforehand what a brothel is, but decided in the end that he’s intelligent enough, since we explained what Inara’s job as a companion entails some weeks ago, to figure this out.

The brothel in question is run by an old friend of Inara’s played by Melinda Clarke, who is so much believable and engaging here than she had been a few years previously in a pair of silly Xena episodes. The kid draped himself under a blanket when Mal and Clarke’s character started their smooching, and he certainly didn’t understand what happened the morning after…

See, if you’re older than ten, then this almost cruel scene of Inara, heartbroken because she can’t tamp down her feelings for Mal anymore and that changes everything, does not make any sense whatever. But for me, it’s one of the saddest little moments of any television series. Morena Baccarin is a very good actress and we like her in everything we’ve seen, but this scene, and the episode’s coda, are both remarkable. Inara is so hurt. If you don’t leave this episode a little hurt, too, well, you must be ten.

So we had a discussion about what all the tears and sadness meant, and how Mal and Inara simply can’t be in a relationship together. Mal is too controlling, too possessive, too insecure and full of jealousy, to have an open relationship. Inara loves her work too much to leave it, and she loves her family too much to let a relationship with Mal be the thing to destroy it, so she leaves. I think this is how Firefly built such a loyal fandom; it’s because something so real, and so painful, hadn’t been done anywhere near this well in an American sci-fi show before then. It’s truly great writing and great acting, and hurts just as much now as when I first saw it sixteen years ago.