Well, I certainly wish that I enjoyed this one more than I did, because it guest stars the great Roger Delgado, but I found myself nodding off about halfway through it. The story’s told in flashback from Jason’s jail cell, so there’s quite a lot of Delgado in the episode, it’s just not a very good one. I think it was likely made at some point between Delgado’s Doctor Who appearances in “The Daemons” and “The Sea Devils.” The script is by Donald James, and happily, the kid enjoyed it more than I did. Last time, Marie suggested that he enjoys it more when Jason King is getting into fights in warehouses than when he’s being cerebral and deducing weird crimes, and this one begins with an after-hours brawl in a jewelry store, so he was paying attention from the start. 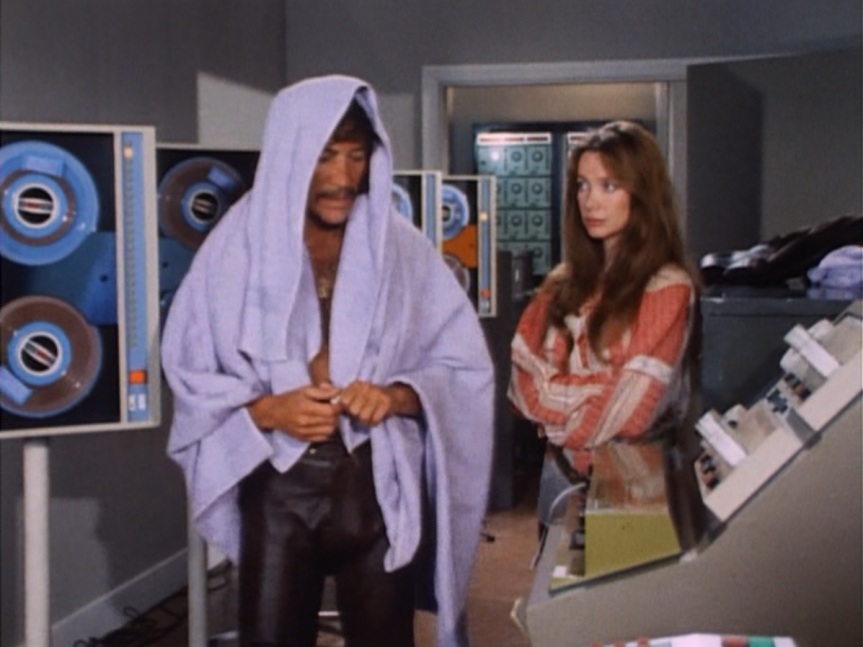 The most interesting part of the story is how the girlfriend-of-the-week, played by Anna Gaël, makes sure that she gets Jason’s attention. She publishes a fake Mark Caine novel called The Stones of Venice that contains all the details of her twin sister’s recent kidnapping, and hires a pretty salesgirl played by Imogen Hassell to stock a sales kiosk with the phony books, making sure that our hero is outraged enough to get to the bottom of the crime depicted in the book and find out who’s getting crooked royalties off his name.

So how’d she churn out a novel that quickly? Simple, because this was the seventies, she just fed a bunch of his other books into a computer, which turned them into punch cards. She added her sister’s name and fed the punch cards into another computer that spat out an ersatz King novel, and sent it to a printer who could do it up – in English and Italian – in the standard King orange trade dress. There was a lot of that plot going around back in the day – The Avengers met a computer that churned out romance novels around that time, although The Avengers being The Avengers, theirs looked like a piano – but I’m amused by the in-universe ramifications. In Jason King’s world, original copies of the quickly-suppressed The Stones of Venice, which had only been sold in a single airport for a couple of weeks, must be his fans’ Holy Grail!