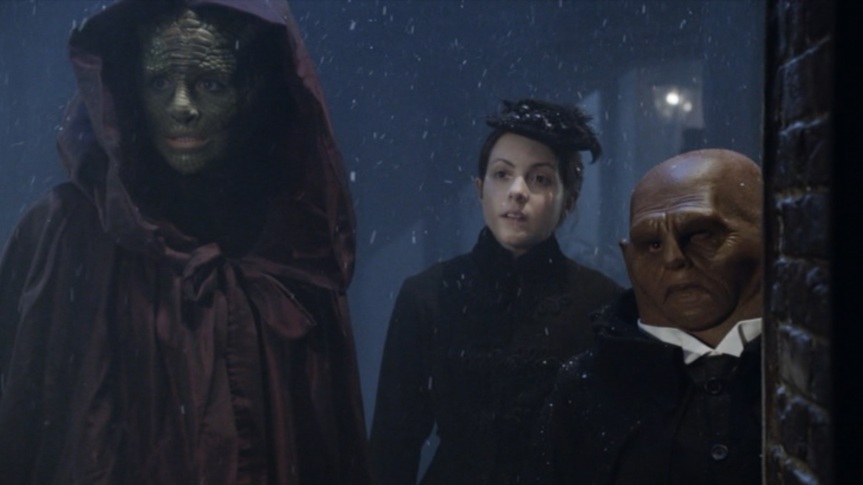 Before we got started with tonight’s feature, we looked at the three mini-episodes that were made here and there in 2012 and 2013 that take place before it: “The Battle of Demon’s Run, Two Days Later,” “The Great Detective,” and “Vastra Investigates.” These set up the world of the Paternoster Gang. I wish I enjoyed these three more than I do, but Vastra’s wiser-than-you shtick aggravates me, and the one-word answer scene in “The Snowmen” would have only been entertaining if Clara had got up and said “I’ll just go back to jumping and yelling in the park, thank you very much.”

On the other hand, I predicted a little over two years ago that the kid would absolutely love Strax, and he certainly did. Dan Starkey is by far the most amusing part of this story. The episode is really constructed extremely well, but the best parts are Strax suggesting they blow up their enemies. 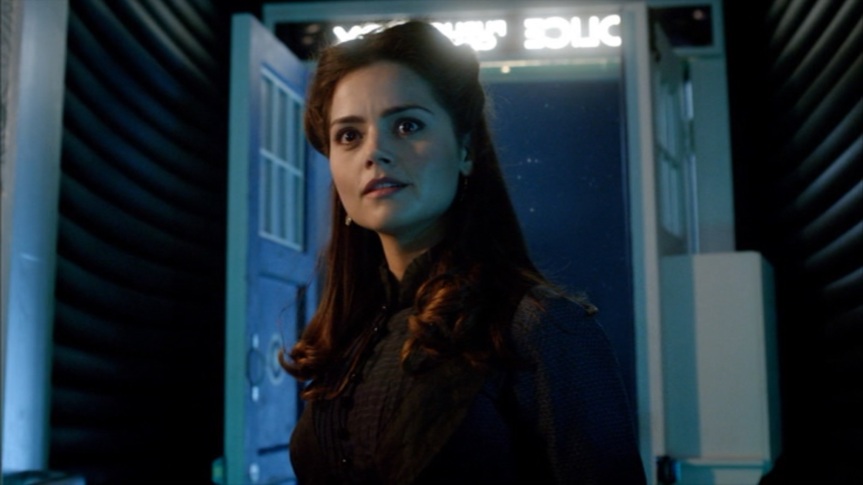 “The Snowmen” retcons a couple of points from Virgin’s Doctor Who novels of the early 1990s. One of them I approve of wholeheartedly. Those books set up the Great Intelligence, as well as some of the Doctor’s other nebulous weirdo foes like The Animus from “The Web Planet,” as an Old God from Before Time, because it was the early 1990s and Lovecraft and all his Cthulu nonsense was really in vogue then. (So was cyberpunk and virtual reality everything. Some of those books have aged terribly.) So giving the Great Intelligence a new spin as nothing so grandiose is fine by me. It is a crystalline, snow-like organism that mirrors thoughts and didn’t start growing until the mid-1800s, not before the dawn of time or any of that.

On the other hand, one of those silly Old Gods was Nyaarlahotep, who showed up in Andy Lane’s otherwise completely wonderful novel All-Consuming Fire, which introduced Sherlock Holmes and Watson as real people in the Who world. So don’t try passing Madame Vastra as the real Great Detective. The real Great Detective attended Bernice Summerfield’s wedding, and he didn’t have lizard skin. The idea.

So the kid enjoyed this tremendously, and I’ll tell you this for free: “The Snowmen” is a good story hampered with a soppy and dopey ending about children crying on Christmas, but none of the story’s very good moments – Clara’s introduction to the TARDIS, Richard E. Grant sneering at everything, the Punch and Judy bit, the astonishingly good new TARDIS set, Strax – compared at all to our son finally connecting all the dots when they were at Clara’s gravesite and the Doctor wonders whether he’s heard the words “Great Intelligence” before. I mean, considering it took the kid until Clara mentions making a soufflé to realize that she was played by the same actress he saw, what, two weeks ago, I was impressed that he realized something was up at all. But he got it in the end. “Wait, wha– the Yeti?!” he shouted as the penny dropped. It was a beautiful thing.

When they showed this in 2012 and Clara said that the TARDIS was smaller on the outside, I punched the air. I’d been wanting to hear somebody say that for years.