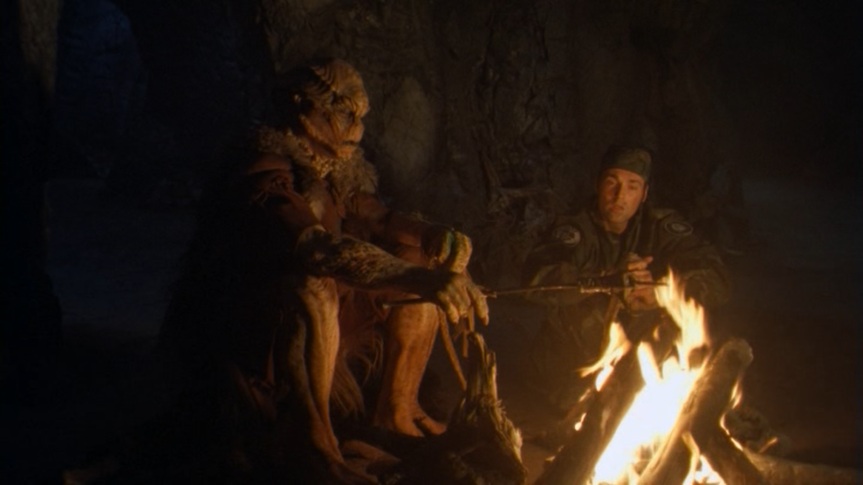 In a story last season, we learned that the SG-11 team had been captured and executed by Apophis’s forces. In the year that followed, the designation was given to a new team, and another scientist that we’ve met a couple of times was assigned to them… and they all get killed in this story. Unlucky number.

Anyway, this is an entertaining story that reintroduces the Unas, the big dudes who’ve appeared as one-offs in a couple of adventures. I like the setup a lot. This no-tech planet is the homeworld for both the Unas and the Goa’uld, who live simply, albeit parasitically, as nasty river creatures. Generations and generations earlier, the river snake-bugs started possessing Unas, learned how to use the Stargate on the planet, and later on, for whatever reason, started taking human hosts instead. The original world, with its “aboriginal” Unas and simple Goa’uld, was forgotten. I like the way they give us some answers here about the history but leave us plenty to guess. And the kid enjoyed the back-and-forth between Daniel and the Unas who captured him, and later decided that he can be trusted. The Unas is called Chaka. (No, not that one.)

It’s not a particularly original plot, but combining the fine location, the believable way that Daniel uses his language skills to communicate and understand, and the downright excellent acting of the poor fellow in that restrictive costume made for an entertaining hour. Chaka will return in a few episodes down the line. I was pleased to see him again when we first watched the series, and I’m sure our son will like having him as an occasional recurring player as well.

That’s all from SG-1 for now. We’re going to take a short break to cycle something else in for a couple of weeks, but we’ll resume season four in October.