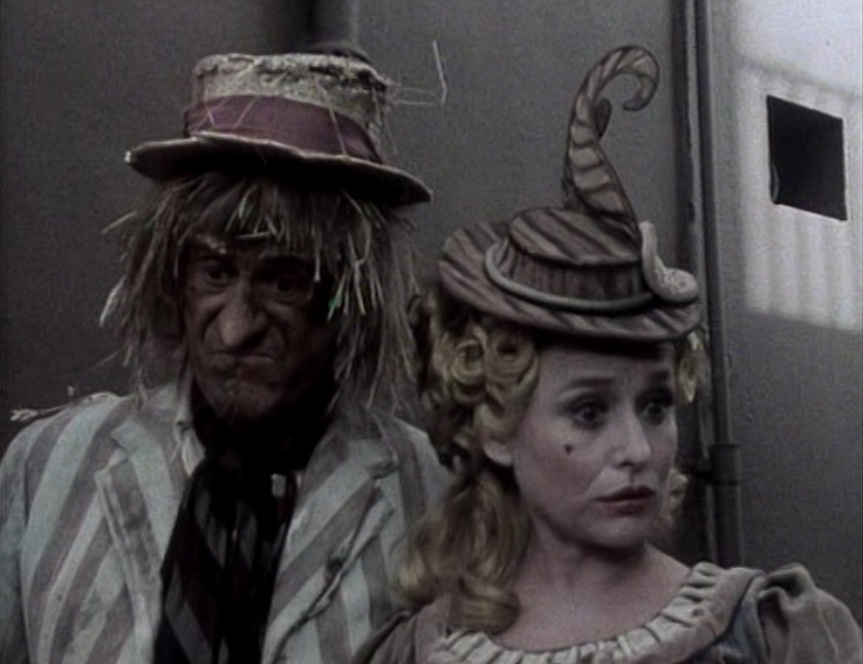 And now back to 1980, and a lovely day by the seesaw. Worzel Gummidge started his second series by stowing away in the back of a bus carrying two dozen old folks taking a day trip to the Devon coastline and eating all twenty-four of their picnic lunches. I’m always fascinated by the little cultural differences between our countries. The trip included a portion of tobacco for all the gentlemen. Worzel says that it tastes terrible, but his new ladyfriend explains that she smokes it in her pipe.

Barbara Windsor plays Saucy Nancy, the masthead of a replica ship which you can tour for 10p. A sign beside it explains that it’s the same ship that had been used for filming in ITC’s action series The Buccaneers. It’s the Golden Hind, docked as a living history museum in Brixham, and the price has gone up to £7.00 today. Windsor is freaking hilarious as Saucy Nancy. We saw her briefly in the Christmas Special, which aired later in 1980, but didn’t really get the chance to understand who she is. Saucy Nancy was also created by the Crowman and has wheels rather than legs, and when her inevitable war with Aunt Sally reaches its peak, Aunt Sally gives her a shove downhill and I think the kiddo fell into several pieces laughing.

Incidentally, the direction and editing of this mayhem is much, much better and faster than what we saw in the first series. At one point, Worzel, Sally, and Nancy are being chased around Brixham by the crowd of old folks, the fairground crew, and a guy from a food truck played by Roy Evans, and they found a great location for the multiple mobs to converge. Nancy’s rollercoaster ride to the ocean is also cut really fast – and Windsor looks terrified as she rockets downhill in that big wooden dress – and it ends with a predictable but wonderful splash. It was gloriously ridiculous, we laughed like hyenas, and I’m glad we’re spending the next couple o’ weeks in the comp’ny of our old pal Worzel.