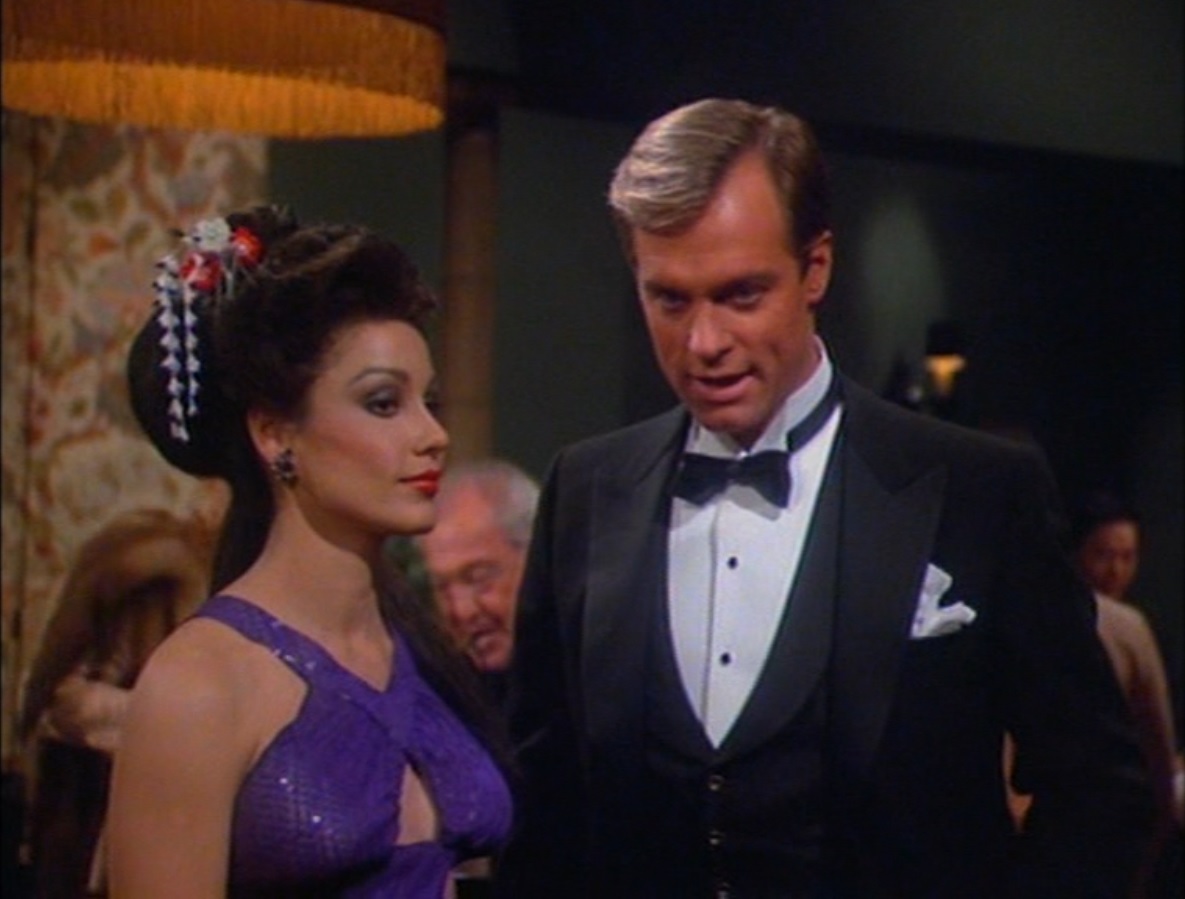 That was really entertaining! “High Stakes Lady” doesn’t have the weird, larger-than-life high fantasy that I seem to enjoy most in this world – the idols, volcanoes, lost civilizations – but it does have a really solid plot about a gambler who wraps Jake around her finger. She’s obviously up to no good, and anybody who’d insult Princess Koji to her face with that high-strung bodyguard of hers ready to snap is clearly living dangerously, but I was stumped as to what was going on and how Charles Napier, playing a gambler from Texas who’s not what he seems either, fits in. We know that one of the gamblers at Princess Koji’s casino had somebody killed earlier, but who are these people? Criminals? Spies? Nobody’s telling, and when they do, they’re lying.

I also enjoyed a really nice touch in the pre-credits montage. Like a lot of American programs from the seventies and eighties, Tales of the Gold Monkey doesn’t begin with a short, exciting scene to hook the viewers, but a little showreel of exciting moments from the show you’re about to watch. Most of these shows are all pretty bad about giving away key plot points and explosions and smooches, but this montage ends with what looks sure to be the climax of the episode when a small yacht explodes at sea. That happens halfway through this adventure, with another twenty minutes of twists and surprises to go, and no, Napier’s character isn’t what he seems, either.

The kid mostly enjoyed it as well, apart from a lingering bit of relationship stuff early on. Jake and Sarah have settled into more of a buddies friendship, which is what you’d expect from an action show in 1982-83; it leaves the hero free to smooch pretty guest stars when the female lead isn’t around. But the pretty guest star this week starts moving in on her mark right from the get-go, under Sarah’s nose, and she naturally gets both jealous and annoyed that Jake is being such a sucker for a cute blonde. So the kid grumbled about Sarah being angry, but at the end of the show, cap in hand, Jake treats Sarah to a reconciliation lunch and an explanation, and, hopefully, an understanding that if he’s going to go smooching pretty guest stars, he can do it someplace other than Boragora.

One thought on “Tales of the Gold Monkey 1.14 – High Stakes Lady”