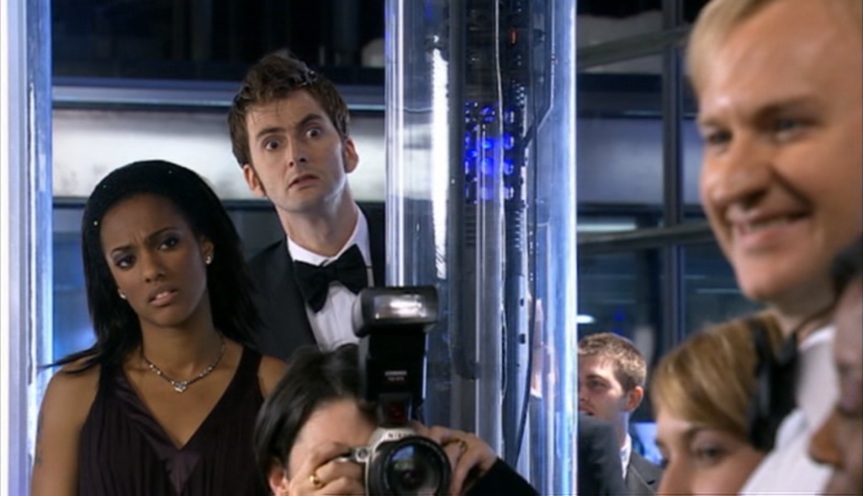 Our kid’s figuring this whole television thing out. We pointed out that this was not the first time that a mysterious figure called “Harold Saxon” was mentioned in the recent set-on-Earth stories. He chewed on it for a second and said “We’ll probably find out who he is at the end of the season.”

So today’s episode is a pretty simple monster movie that bends, with minimal effort, into the Who format, although giving a scientist who wants to live forever and cheat death a name like Lazarus is a bit on-the-nose for any silly sci-fi adventure. Lazarus is played by Mark Gatiss, who had written a couple of previous episodes and has a few more really good scripts to come. Lazarus, in a supremely silly moment even for this often exceptionally silly series, somehow transforms into an enormous CGI monster. It doesn’t make a lick of sense, but it does result in an eye-poppingly grotesque beast to scare the kids. Our son described this one as “a skeleton-human-scorpion mix” and really enjoyed being grossed out – slash – frightened by it.

Despite being every bit as scientifically nonsensical as the previous story, I still have a soft spot for this one for lots of small reasons. I like Martha’s relationship with her family, I like Gatiss as the villain, and I really do enjoy the ending, which is set in a big old London cathedral. In much the same way that “Gridlock” had been a small tribute to 2000 AD, this story is a clear tip-of-the-hat to the BBC’s original Quatermass serial from 1953, which also ends in a big showdown in a cathedral. The later episodes of that serial were shown live and were never actually telerecorded – almost as though the BBC wanted to save its people the trouble of actually destroying them twenty years later – but the story was remade as a film by Hammer in 1955 called The Quatermass Xperiment which most everybody involved in this episode knew backwards and forwards. That’s certainly the case with both David Tennant and Mark Gatiss, who had actually performed in a live restaging of The Quatermass Xperiment for BBC Four just two years before they made this!

One thought on “Doctor Who 3.6 – The Lazarus Experiment”