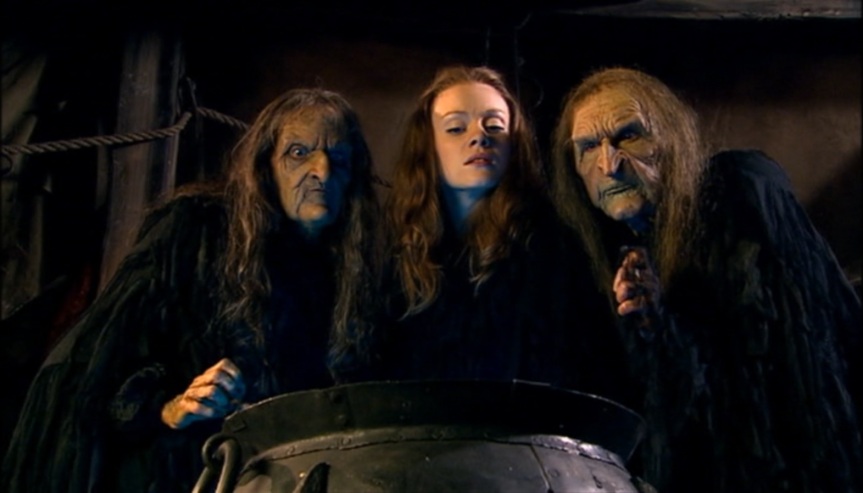 Another year, another celebrity historical. This time, it’s William Shakespeare, in a really fun story written by Gareth Roberts. And it has witches in it!

Long (long) time readers may recall that our son had the heebie-jeebies scared out of him by witches a time or two, and so I’m glad to say this one slightly continued the tradition and gave him a couple of good startles. It wasn’t the witches themselves, just some offscreen screams alerting people to what they’re doing. There’s also a shot of some poor fellow’s skull being used as a candle holder that prompted some shocked comment. Were these the in thing in 1599 or something?

Anyway, the witches come from a fractured timeline where they used words in the same way human science uses numbers, which is a heck of a good idea. There’s even a delightful continuity nod when the attractive witch, Lilith, explains that the Eternals (from 1983’s “Enlightenment”) were the ones that banished the witches to another universe. Millions of years later, three of the witches escape and plan to use William Shakespeare’s words to free the rest of their species. The word-magic is built around Shakespeare’s play Love’s Labours Won, which, again, is a heck of a good idea. Honestly, my only complaint with this hour is that it spends a minute too long with the visual effects; that’s a minute that would have been better spent onstage with the actors performing the lost play.

I gave our son a heads-up that this episode was shown in 2007 when all the world was in a tizzy about the then-forthcoming release of the last of the Harry Potter books, and that there are a couple of Potter gags in the episode. Unfortunately, he missed the second one, in part because the mix of end-of-the-world sound effects and too-loud music made it hard to hear Martha shout “Expeliarmus!” and in part because while Marie and our son have read some Potter together, he doesn’t know enough of it in detail for the word “Expeliarmus” to mean anything to him. Funny; thanks to Doctor Who, that’s the only spell whose name I know.