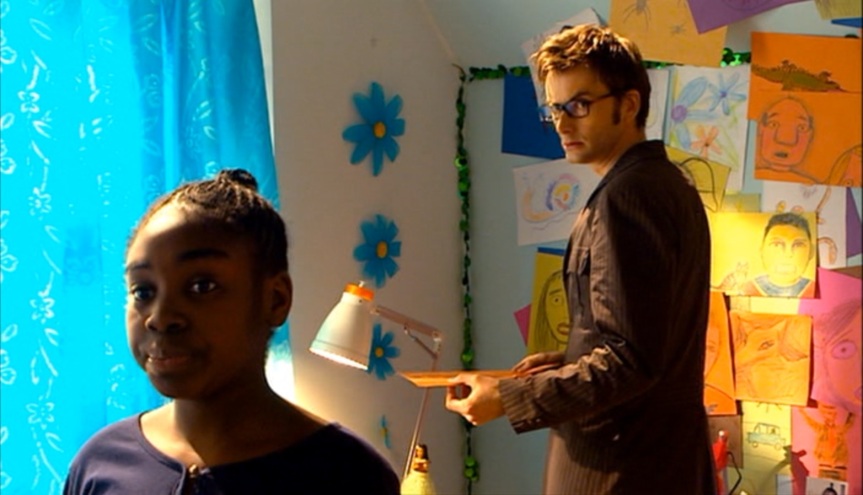 A couple of nights ago, we watched the latest Doctor Who episode, which is called “Orphan 55.” I thought it was pretty terrible – the first Who I haven’t enjoyed in a few years – but the real disappointment was knowing we were just 48 hours from sitting through this turkey again. I’ve never liked “Fear Her” at all. I think it’s the worst episode from the Russell T. Davies years by a mile. Although, watching it again tonight, I am struck by just how much better structured than “Orphan 55” it is.

“55” is full of flaws, and while it never sinks into the treacly “power of love” ditch that this does, its most annoying thing is that it isn’t given any room to breathe. The opening scene in the TARDIS is frantic; the spa seems under attack the instant our heroes arrive. “Fear Her” does a comparatively brilliant job of establishing a mood of fear and dread, and there’s an ugly scene in the road that caught my eye more effectively this time, tinged as it is with racial fears and “The Monsters are Due on Maple Street.” Honestly, this one starts out well. The only grumble I can muster for most of the episode’s running time – and this is petty – is that when Abisola Agbaje, the young actress who plays the possessed little girl, is speaking in her “alien” voice, she’s really hard for me to understand. Otherwise, the kid carries off a tough role extremely well.

I’ll give Davies and the episode’s writer, Matthew Graham, credit for trying something new. The alien isn’t malicious; it’s a frightened little child. Its species travels the galaxy surrounded by its gigantic, billions-strong family in tiny little pods. It got lost, it’s dying without the close contact of all of its family, and it’s using a possessed kid to suck people into limbo to keep it company. But the more we learn, the less sense the story makes, including a strange threat of a drawing that might come to life, and it’s driven by coincidence like the alien running out of patience and needing a massive influx of love and company several days after it landed, right when the London 2012 Games are set to begin. Everything falls completely apart after that, leaving us to wonder just what the explanation was for the missing 80,000 spectators, and how in the world the Doctor, honorary Brit he may be, got out of that stadium without more questions from Olympic security than he’s ever answered on any planet, anywhere.

I wonder what the “Mystery man who lit the torch” page in the Who-universe Wikipedia looks like. Meanwhile in London, Elton Pope, perhaps the sole survivor of “that LINDA lot” after that incident six years previously, watched the Olympics and said “Oh, him. He still hasn’t aged.”

Our kid liked it, as I believe kids do, but that stultifying ending kicked this story down into my personal bottom five when I first saw it, and even two Steven Moffat-era turkeys that landed down there with thuds have failed to dislodge it. Still, it’s all smooth sailing from here for quite a while. But I’m afraid we’ll be delayed getting to the big series two finale because we’ve got to return to the present day for a bit first…