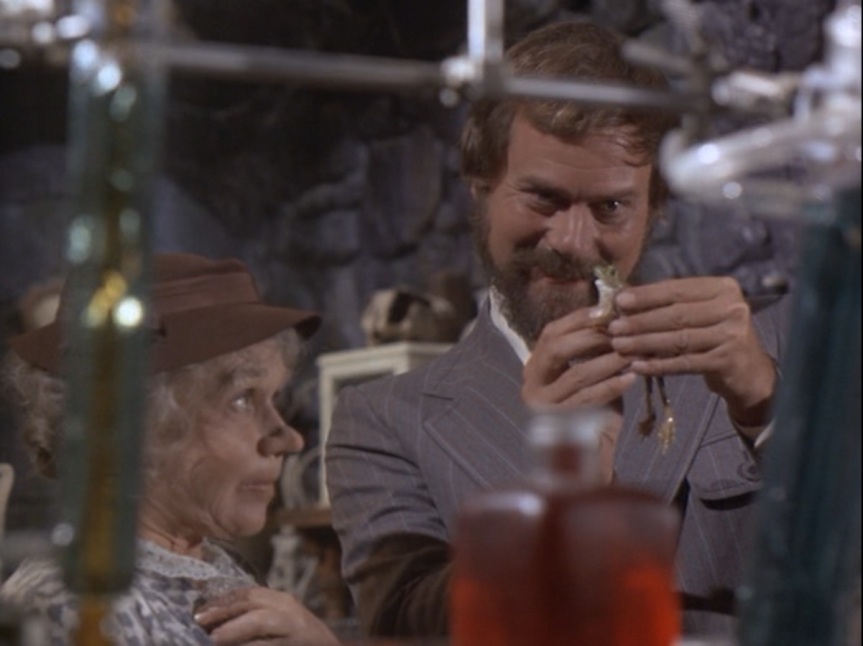 After a successful pilot, NBC ordered a six episode first season of Night Gallery. They aired the episodes as part of the umbrella series Four in One starting in December 1970 and led with an hour that comprises two absolute turkeys. You can pretty much sum them up as “dated, sexist trash.” I found a thing or two to like about each installment, but nobody else in the house did.

Both installments were scripted by Douglas Heyes, a great, great writer who was responsible for some tremendously good episodes of Maverick. “The Dead Man” is an adaptation of a short story by Fritz Leiber, and maybe it would read better as a creepy little tale. Unfortunately, when you dramatize a story like this, you have to put the story’s lone female character front and center. Fickle and hungry for a younger lover, she’s ready to ditch her older husband, a doctor running a private clinic, for his hunky blond patient.

When the patient dies in an experiment, she loses her freaking mind, and turns hysterical in the way that fiction demands but real life never actually sees. It builds to a creepy crescendo that would tell magnificently around a campfire deep in the woods, but on television leaves the woman looking inhumanly stupid. At least her screams as she runs through the graveyard were sufficient to creep our kid out. It wasn’t the denouement, but the screams, so credit to the actress. (Interestingly, a screaming female villain at the end of a recently-watched Kolchak similarly had him wide-eyed.)

By any objective measure, “The Housekeeper” is even worse, but I got a kick out of Larry Hagman’s performance as the villain. I felt the need to point out to our son that he was the villain because I was afraid he might think that the protagonist was the hero, just a jerk of one! Hagman’s looking for a kind-hearted “old hag” to undergo a magical personality transplant with his younger, sexier, hateful and rich wife, who’s about to leave him and cut him off. Jeanette Nolan, under some heavy makeup and blacked-out teeth, is sweet enough to see his point of view, but maybe that’s not the only point of view that she sees. Again, unfortunately, actually giving the women in the story dialogue and body language underlines what a feeble, male fantasy concept this is. Hagman didn’t need a nice old lady with a kind heart; he needed Lady Macbeth, Norma Desmond, or Cruella de Vil. Better luck next time, you amateur.