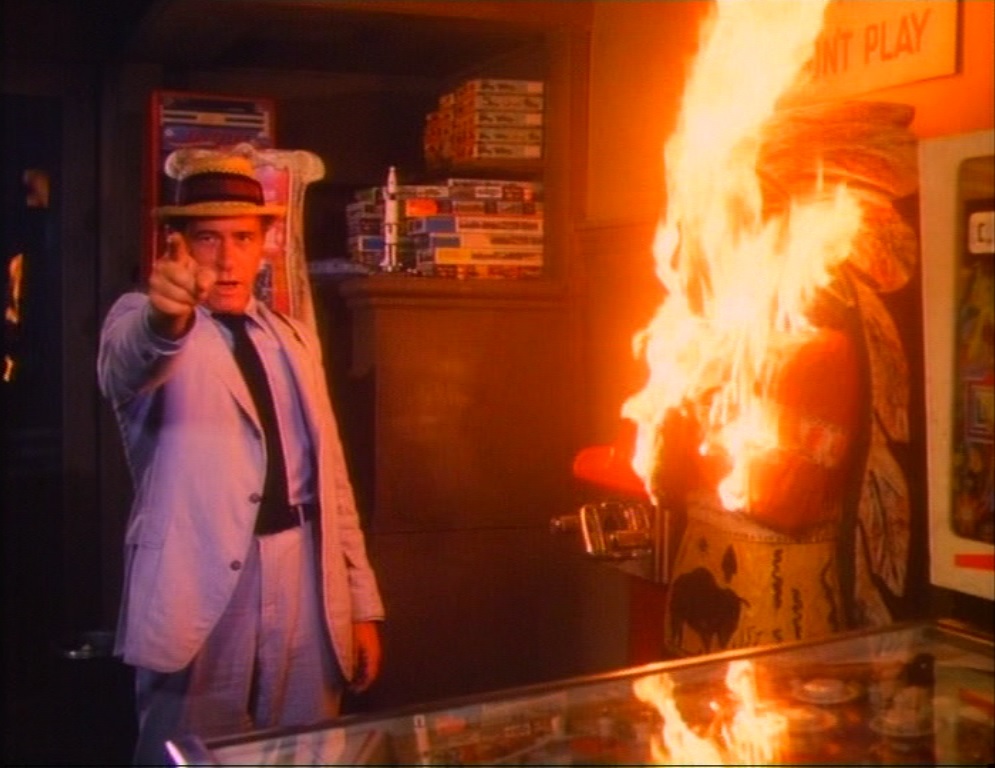 “Firefall” really breaks away from what’s been starting to feel like a Kolchak formula, particularly with five single-word-description supernatural beasts each week. This one is about a ghost, but in a pretty convoluted explanation, the ghost has taken the physical appearance of the living man that it plans to replace, and it also has the power to cause spontaneous human combustion in anybody who falls asleep. After three and a half days awake, our hero is running on fumes but doesn’t dare doze.

Our son told us that he really liked this one. It’s not really frightening, but it’s got some incredibly neat and occasionally freaky imagery. The most memorable visual comes when Carl and the ghost’s target are in a church for some level of protection, and the ghost, taking the form of its target, is staring at them from the windows like a malevolent imp.

One odd thing for me is that I’d misremembered which four episodes of the series had been removed from the syndication package. Remember when, once upon a silly time, production companies would make sausage-linked TV movies from two episodes of a short-lived TV show, figuring that since it was unlikely the show would be purchased for syndication, they could still make a little money back with a TV movie for UHF stations? Universal made two Kolchak TV movies that way, but I thought they used four of the later episodes. So I was scratching my head with this unfamiliar story, wondering how I missed this one, when the Sci-Fi Channel actually never showed it at all. (It was mashed up with episode ten as the movie Crackle of Death.)

Obligatory actor notes: not too many familiar-to-me-faces this time. Carol Ann Susi makes her last of three appearances, and David Doyle’s in it for one scene. Fred Beir, who guest starred in everything in the sixties and seventies, plays the man the ghost wants to become.

Postscript: Last week, I mentioned our son’s newest security plush, “Metal Bringer,” a cuddly Saturn V that he picked up at the US Space and Rocket Center in Huntsville. He’s been a little rocket-happy since our trip, as you might expect, and he quietly mentioned tonight that, in the penny arcade where some of the action takes place, he saw a Saturn. I didn’t follow it up; I figured he saw it on one of the pinball machines. I didn’t spot it until I’d posted this. There’s the rocket, on that shelf behind Carl with some other prizes. Good eye for detail, our kid!

One thought on “Kolchak: The Night Stalker 1.6 – Firefall”