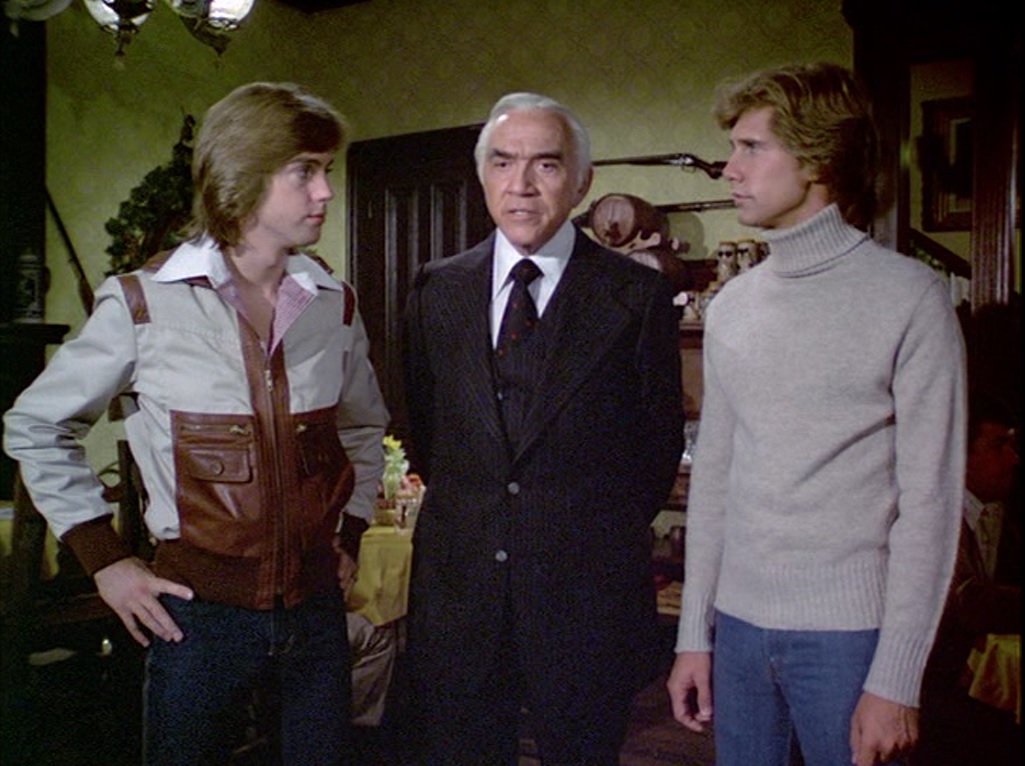 So okay, it seems faintly ridiculous for me to celebrate the first time that the Hardy Boys and Nancy Drew ever crossed over into each other’s stories with a screen grab of Frank and Joe with guest star Lorne Greene, but I’d say it was even more ridiculous that this big meeting did not result in a single useable photo of Pamela Sue Martin sharing good face time with either Parker Stevenson or Shaun Cassidy. Is this a harbinger of a troubled television season, or am I reading too much into things? We’ll see as we spend the next couple of months tackling the second season of this program.

Our son was initially excited to see this back in the rotation, because he really did enjoy the first batch of fourteen – the Hardys’ segments more than Nancy’s, just like most of America then – but this one turned around and gave him a really solid set of frights. The convoluted plot sees Frank and Joe tagging along with a small-change rock band to the Dracula’s Castle Festival in Transylvania, because their dad has vanished on the trail of some art thefts that may be carried out by someone in the entourage of a big rock star who’s playing dates all over Europe. For backup and background, Dad Hardy had been in touch with Carson Drew and his daughter Nancy, who really has no time for the “amateur hour” antics of Frank and Joe.

The “meet cute” involves our heroes unwittingly sending each others’ luggage back to the lobby of a hotel in Munich, much to our son’s glee. He cackled with laughter as the tensions escalated until it ends with Frank flipped onto his back. But then the business of some undead fiend possibly stalking the grounds and tombs of the castle while the bands play – Paul Williams and Bernie Taupin are among the musicians – gave him some behind the sofa frights. And I thought we all knew this simply has to be a Scooby Doo plot!

Anyway, the first cast change to note is that that Jean Casey’s character of George Fayne isn’t present, but actress Ruth Cox is here as a nearly identical character, Bess Marvin. Even weirder, George will be back in some future episodes, but played by a different actress. Lisa Eilbacher’s character, Callie Shaw, has been dropped, and so has the character of Ned Nickerson. Maybe they were freeing up space for more guest stars, who also include John Van Dreelen, Norbert Schiller, and Leon Askin. Perhaps it’s just me, but it does feel slightly silly to pack your guest cast with European actors and then ask Lorne Greene to attempt a Romanian accent as a grouchy police inspector.