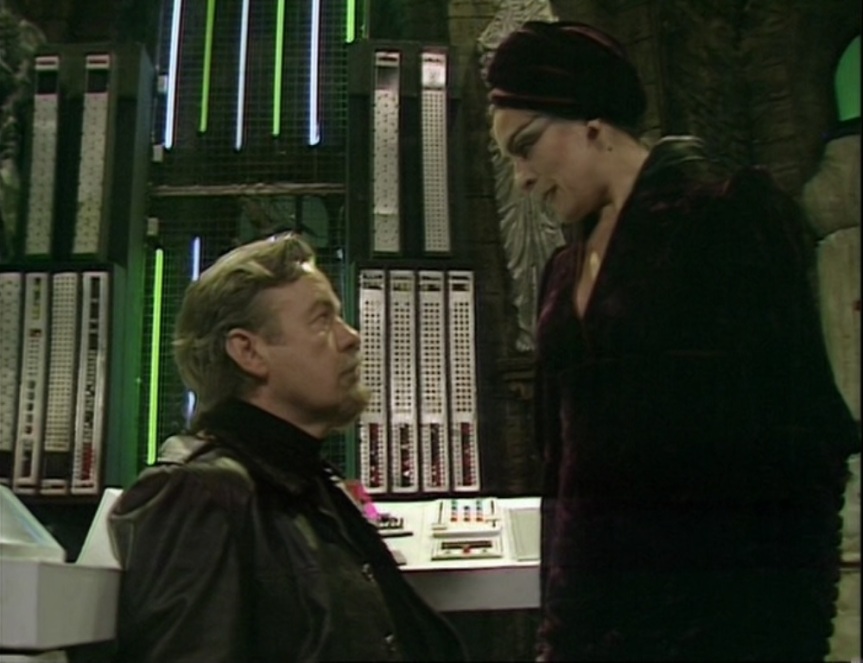 You know, that hung together better than I remembered it. Alexei Sayle’s still the best thing about it, and it would have been a whole lot more wonderful with more of him blowing up Daleks with his concentrated beam of rock and roll, but I think it gelled for me a bit more this time, for some reason. Sayle’s sonic cannon was, of course, our son’s favorite part of the story. His eyes lit up and he had the biggest smile you can imagine on his face when that first Dalek exploded.

Actually, one reason I enjoyed this more than I have previously is that I used to really, really loathe a character played by Jenny Tomasin, and thought the actress did a rotten job. I was wrong. Her character is a really tough one for an actor to play; she’s meant to be much more pathetic than endearing, and foolishly duped by everybody around her. But apart from one snickeringly bad line reading in part one when she bellows “Find the intruders!” I think Tomasin played this role extremely well, which can’t have been easy when you’ve got an amazing actor like Clive Swift literally brushing you aside. I may have mentioned before that my time talking with and observing the actors at the Children’s Museum of Atlanta gave me a newfound understanding of what actors have to do to make their characters work at all. I’m always glad of the opportunity to reconsider the opinions I held when I was even more stupid than I am now.

But right behind Sayle, there’s William Gaunt underplaying his role of a disgraced assassin from a noble order, and Eleanor Bron, who’s magical in anything. I love how Gaunt’s character acts like he is in complete control of the situation in Davros’s lab, and responds to any obstacle without taking an extra breath, just communicating with his eyes and piercing stares. And Colin Baker and Terry Molloy get one of the better Doctor-Davros arguments – easily the first good one since “Genesis,” honestly – as they debate Davros’s latest sick scheme.

We won’t wait fifteen months until starting the next season of Doctor Who like us poor folk had to do in the eighties… in fact, we’ll be back for more adventures in time and space in about eleven days. But first, something else, like the other two shows that we’re watching, that I’ve never seen before… stay tuned!

2 thoughts on “Doctor Who: Revelation of the Daleks (part two)”