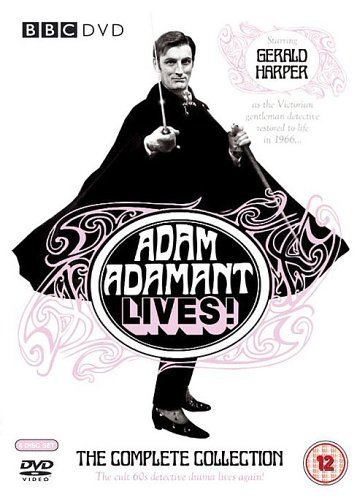 Surprisingly, just as soon as I mentioned it, the “conked on the head” flashback doesn’t appear in this morning’s episode, which was written by Richard Harris, but another recurring motif does. Adam Adamant has a complete blind spot to the possibility that any woman would be mixed up in the schemes of his enemies. I really hope the next time he wakes up in a cell with Georgie, who’s been in the cell for hours already, she hisses at him “WHEN will you learn to stop trusting women?!”

But speaking of enemies, today’s episode has a great one. It’s the wonderful actor Peter Vaughan as a doomsayer-type preacher who is organizing a fake nuclear attack to cause a mass panic while his men heist banks and jewelry stores. Our son really hated this guy. He got so irritated with him that he had to break out his trusty finger-pistols to start shooting at the screen. He also got so worried about Georgie investigating the enemy headquarters that he hid under his blanket, peeked out just long enough to see that she was getting away, and then gasped in total shock when the camera revealed Vaughan, showing that she wasn’t so lucky! Isobel Black plays the villain’s daughter, and Talfryn Thomas has a tiny walk-on part.

Thomas is only on screen during one of the filmed segments, and these are, again, completely beautiful. I’m always impressed by the restoration of black and white BBC material, but while the studio stuff looks very good – many of the same team worked on restoring Doctor Who – the film material looks like it was shot yesterday, with incredibly crisp blacks and resolution so fine you can marvel at the stonework on the old buildings in the London streets. There’s also a terrific scene shot at night where a man is surrounded by the doomsayer’s henchmen, each of whom is wearing one of those “The end is nigh!” sandwich-boards. There are probably people who saw this episode in 1966 and are certain it actually happened in an episode of The Avengers!

But two little elements just can’t help but remind you that you’re watching television and not the real world. One problem is that the studio set doesn’t match the exterior of the villain’s Mission Hall. The window that Georgie peeks through is on the opposite side of the front door when they cut from film to the studio. And the other problem is that Georgie’s fab scooter – is it a Vespa? – lies parked outside the hall for something like two days and nobody makes off with it!

(Note: I can play them, but I’m not presently able to get screencaps from Region 4 DVDs, so many of these entries will just have a photo of the set to illustrate it. Click the link to purchase it from Amazon UK.)