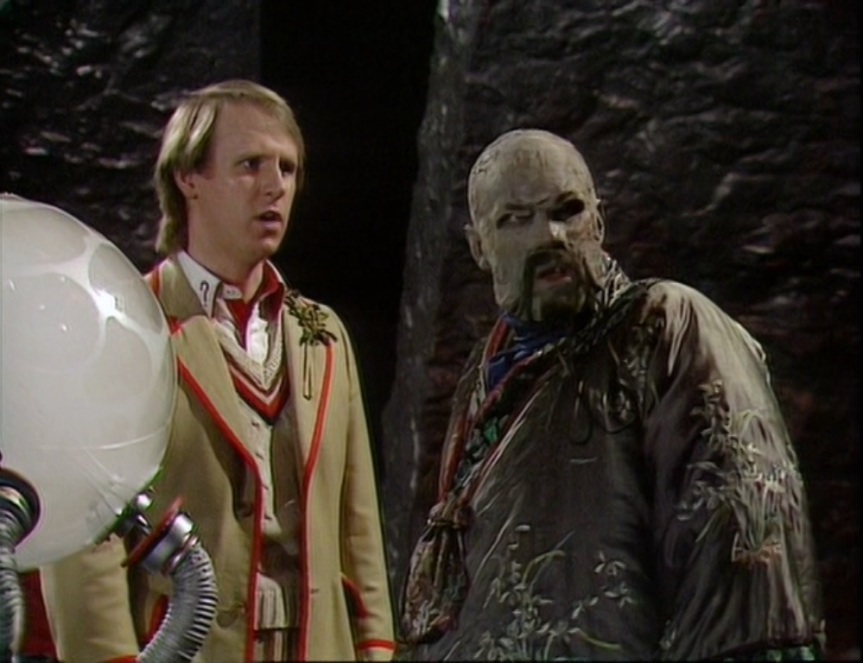 The bubble had to burst eventually. It’s just a shame that two very, very solid and entertaining seasons of Doctor Who had to crashland with one of the all-time misfires. “Time-Flight,” written by Peter Grimwade, had been in development for so long and rewritten so many times that the author had asked “Look, do you mind if I direct a few stories while you’re waiting?”

There’s a school of thought that says that Grimwade’s original idea about two “tribes” of mental aliens who exist only as energy – a concept we won’t even encounter until part three of the story – might have been pretty interesting before the producer started shoehorning two missing airplanes and the return of the Master into the narrative. Part one at least begins promisingly, with the Doctor, Tegan, and Nyssa discussing Adric’s death, and then there’s some nice location filming at Heathrow Airport while the Doctor just tries to read the sports page, a moment that I’m pretty sure is unique in the program.

After a reasonably promising beginning, it all falls apart. “Meglos” in the previous season certainly wasn’t very good, but at least it felt coherent. This is just scene after scene of the Doctor reciting technobabble in a succession of stunningly fake and very small environments. We’re back to character actors again this time: Nigel Stock, who had been so very entertaining in the late sixties as Watson to Peter Cushing’s Sherlock Holmes, is so very tedious as a professor who thinks they’ve been hijacked to the Soviet Union instead of the Jurassic period. Michael Cashman, who had been one of The Sandbaggers and is today The Rt Hon. The Lord Cashman CBE – now there’s an interesting career arc – is a British Airways co-pilot.

And there’s the Master. When he’s revealed at the cliffhanger of part two, our son’s response was as follows: “Oh, come on! Come on! Not the Master! He’s so annoying!” Perhaps because the villain of the piece had possibly originally been a villain in the style of the Arabian Knights, everybody decided to just let the Master disguise himself as an overweight grey-skinned magician with packs of green slime under his mask. He must have figured the Doctor would show up… although I believe there’s genuinely no part of his plan that requires him pretending to be anybody else in the first place. Let’s see what happens tomorrow night in the second half and see whether I’m wrong!

3 thoughts on “Doctor Who: Time-Flight (parts one and two)”