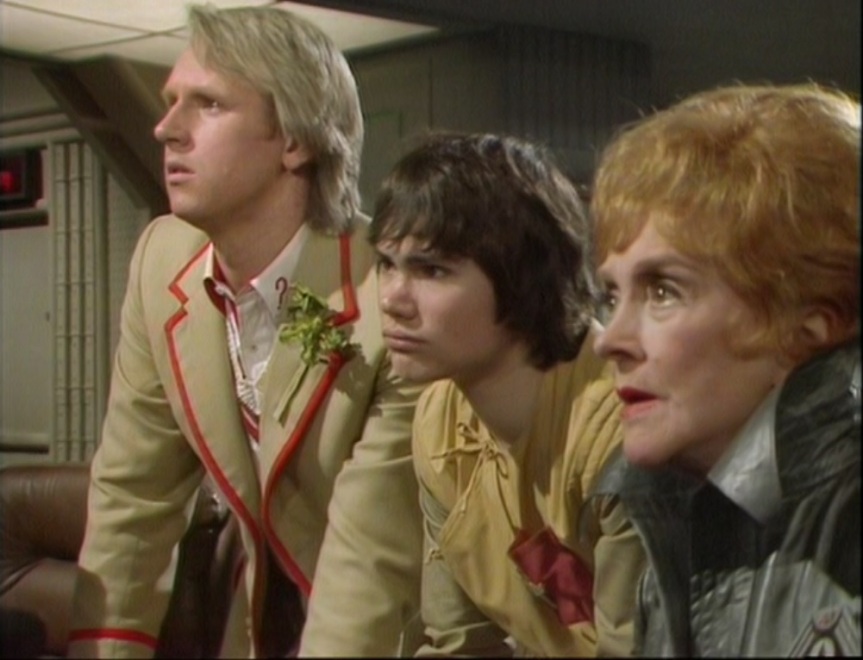 Well, what I was going to say last night, before our son went and stole my thunder, is that “Earthshock” is a very popular and very entertaining story written by Eric Saward and directed, with incredible tension and a frantic pace that Who rarely employed as effectively as here, by Peter Grimwade. It featured the return of the Cybermen after seven years away from the program.

And it features Beryl Reid, interestingly, as one of the main guest stars. Reid is one of those names in British entertainment largely unknown to Americans, but I’m assured that she’s a very curious choice. It strikes me as part of the same spirit of season nineteen, where we’ve seen more prominent “guest stars” better known for starring comedy roles than ever before, rather than returning to the usual bench of character actors. I mean, sure, you want somebody to play the chief constable in a quiet English village in 1925, you go to Moray Watson (or you phone Glyn Houston if Watson turns it down), but I like seeing people like Reid, Nerys Hughes, and Michael Robbins in parts like these.

(I’ve also been oddball-casting what this season of Who would have looked like as an American show in 1982 to drive home just how strange these choices are. I figure Karl Malden as Monarch, Penny Marshall as Dr. Todd, and John Ritter as Richard Mace. I can’t quite decide between Betty White or Jean Stapleton as Captain Briggs.)

Anyway, in the nineties, fandom started turning on “Earthshock” because it’s full of tough men with guns trying to be macho. There’s more of this to come in the Eric Saward years, which is a disappointment to people who only want Doctor Who to be about Tom Baker trading witty insults with Julian Glover. That said, I’m not looking all that forward to a couple of upcoming adventures which don’t have the great bonus of Peter Grimwade’s direction. Considering the severe limitations of videotaping gun battles “as live” in a studio, the shootouts in “Earthshock” rank among the best in the whole program.

And they had our kid on the edge of his seat, up off his seat, hiding behind the sofa, and having a complete blast. He says that he totally loves the action in this story, but he’s also simultaneously protesting that the Cybermen are too scary. “I like action, but the Cybermen are about domination, not action!” That, and their thumbs are mean, we mustn’t forget.

2 thoughts on “Doctor Who: Earthshock (parts two and three)”