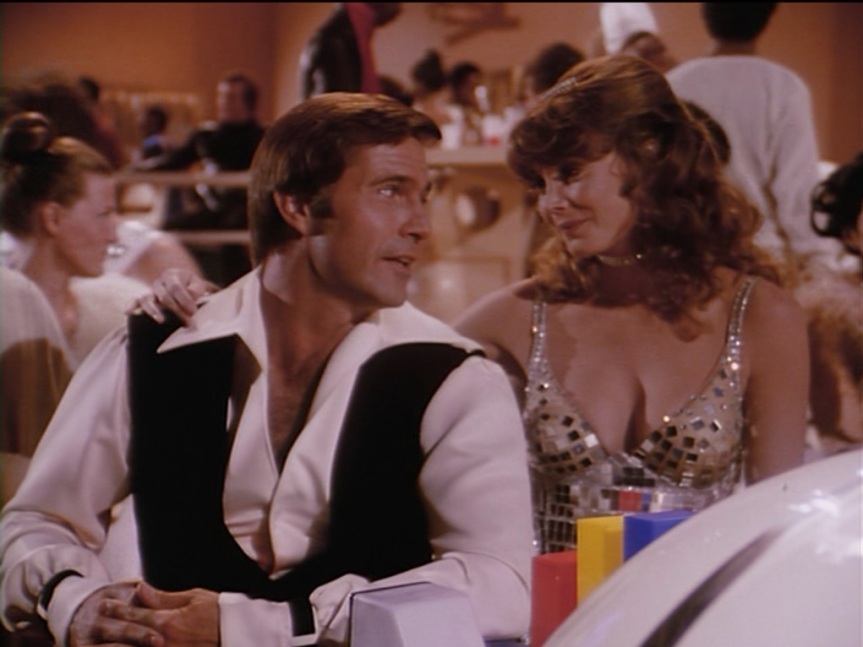 Once again, there’s a better story hiding here than its glitzy title would suggest. There are a few scanty outfits on the orbital gambling city of Sinaloa – guest star Pamela Susan Shoop, shown above, is wearing an unforgettable one in all her scenes – and some outrageous headdresses and a blue person from a planet where apparently the genders are reversed. But the reality of the budget means that we only see one big gaming room and some relatively conservative wardrobe choices for the all-humanoid extras, and the only game we see is Blackjack. This game is called “Ten and Eleven” in the 25th Century and is something of an old-fashioned throwback, which naturally Buck has mastered. I thought it was kind of odd that the director didn’t linger over any other space games.

Heck, Glen A. Larson was already reusing props and sound effects from Battlestar Galactica all over the place, so I was honestly expecting to see an avalanche of those plastic gold “cubits” spilling from a slot machine.

I chose the picture I did not only to spotlight an attractive actress in a fun dress, but because this was the best scene in the whole show so far. You understand, watching shows from the period, that the actors who got to play action heroes didn’t get a lot of opportunities to do different things. So Gil Gerard is winning big and starts recounting a story to the glamour girl on his arm about his last trip to Vegas with a good friend, and he abruptly becomes downbeat and sad, reminded again that everything he knew is gone. And you know what? Gerard plays the heck out of the scene. He’s excellent in it. I really enjoyed watching that.

Even without this, Anne Collins’ story is better than I was expecting. Cesar Romero – Batvillain # 2 so far – has a small role as a mob boss who’s willing to turn himself and his records in to the Earth authorities if they can rescue an employee from the boss who runs Sinaloa. This was a perfectly fine hour, with a couple of good fights to keep our son amused, several small explosions, and another dogfight in space getting away. Joseph Wiseman also has a part in this story as an infamous interrogator, perhaps to make up for almost all of his role as Emperor Draco in the pilot movie ending up on the cutting room floor.