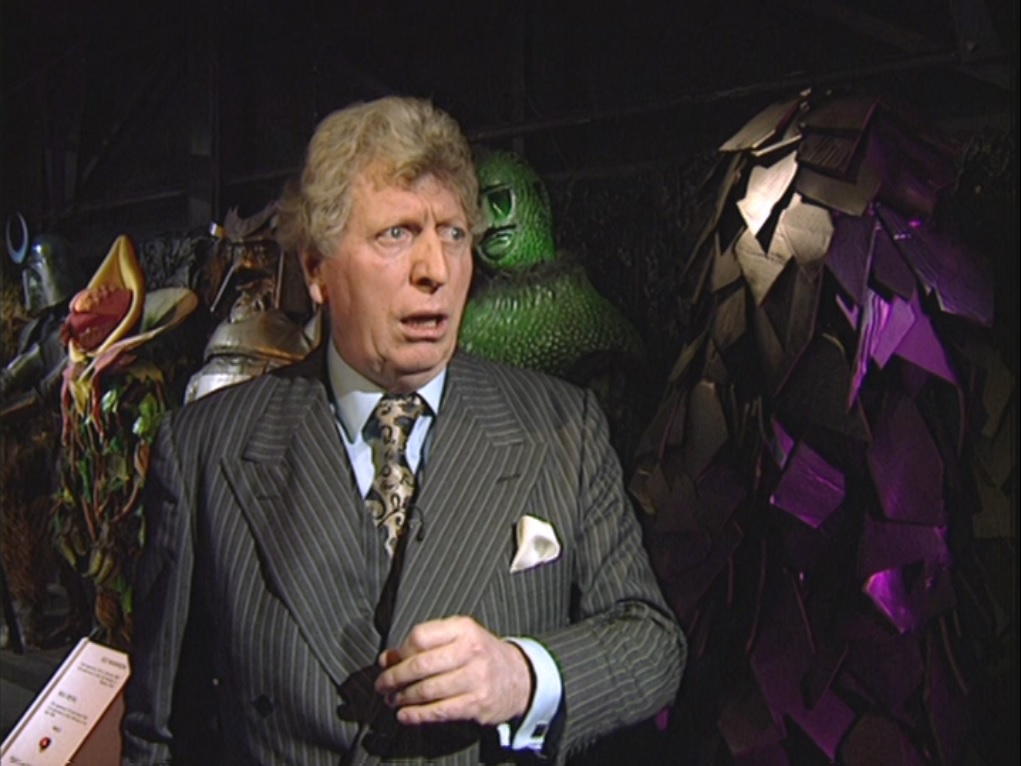 There may be one or six readers who visit us here at Fire-Breathing Dimetrodon Time who don’t know about “Shada.” For them, briefly, the situation is that Douglas Adams wrote a six-part serial to wrap up his year as script editor for Doctor Who. Actors Denis Carey, Victoria Burgoyne, and Christopher Neame, among others, joined the cast and director Pennant Roberts in Cambridge in October 1979 for location filming. Then they returned to London for what should have been three studio recording sessions. They finished the first, rehearsed the second, and then a years-long dispute between the BBC and one of the technician unions blew up.

The cast were locked out of the studio, it didn’t get resolved in time for other productions on the calendar, the actors’ time-sensitive contracts expired, and the show was formally axed shortly afterward. Adams and the program’s producer, Graham Williams, got to end their time on Who with a story that was cancelled. Some of the film footage was used as “new” material four years later in “The Five Doctors,” and even more of the script was used as “new” material in Adams’ 1987 novel Dirk Gently’s Holistic Detective Agency. He also used the climax of “City of Death,” which I always thought was a bit cheeky of him.

In 1992, BBC Video released a “best that could be done” version of “Shada,” with a small budget for some visual effects and editing. It was overseen by the show’s last producer, John Nathan-Turner, and featured music by Keff McCulloch, who evidently didn’t actually watch the visuals that he was scoring, along with an introduction and linking narration by Tom Baker, kind of sort of in character but also wearing a pretty nice suit. This version later made its way to DVD in a three-disc set with a boatload of extras and the fab, feature-length documentary More Than Thirty Years in the TARDIS. Tonight, we sat down to enjoy the first twenty-ish minutes of this story in its 1992 incarnation.

And enjoy’s the right word. For ages, with only a fan-assembled compilation of the footage making the bootleg rounds to view, one school of thought in the eighties said that “Shada” was a lost classic, that it was the epic we should have got. Other, much grouchier people pointed out that the two previous “epic” six-part serials that Graham Williams had produced were “The Invasion of Time” and “The Armageddon Factor,” neither of which blew anybody’s mind, and really, why should anybody expect this would have been all that different from “The Horns of Nimon,” which should have been the story that led into “Shada,” and not the season finale it became.

Simple. “City of Death” was, after all, very, very different from “The Horns of Nimon.”

I think that “Shada” is completely wonderful. It’s by leagues the best evidence we’ve got that Pennant Roberts had such a good reputation as a director, because the location work in Cambridge is just fantastic, and the scenes set in Professor Chronotis’s oddball shambles of a room in Cambridge’s St. Cedd’s College are delightful. Not very much happens in part one, but it’s very witty and very fun to watch, and I love Christopher Neame stomping around Cambridge in his sci-fi villain costume and not attracting anybody’s attention. The bit about the inhuman babbling of undergraduates always slays me, and there’s better still to come.

At least I think there is. I haven’t actually seen what comes next. I’m really looking forward to tomorrow morning.